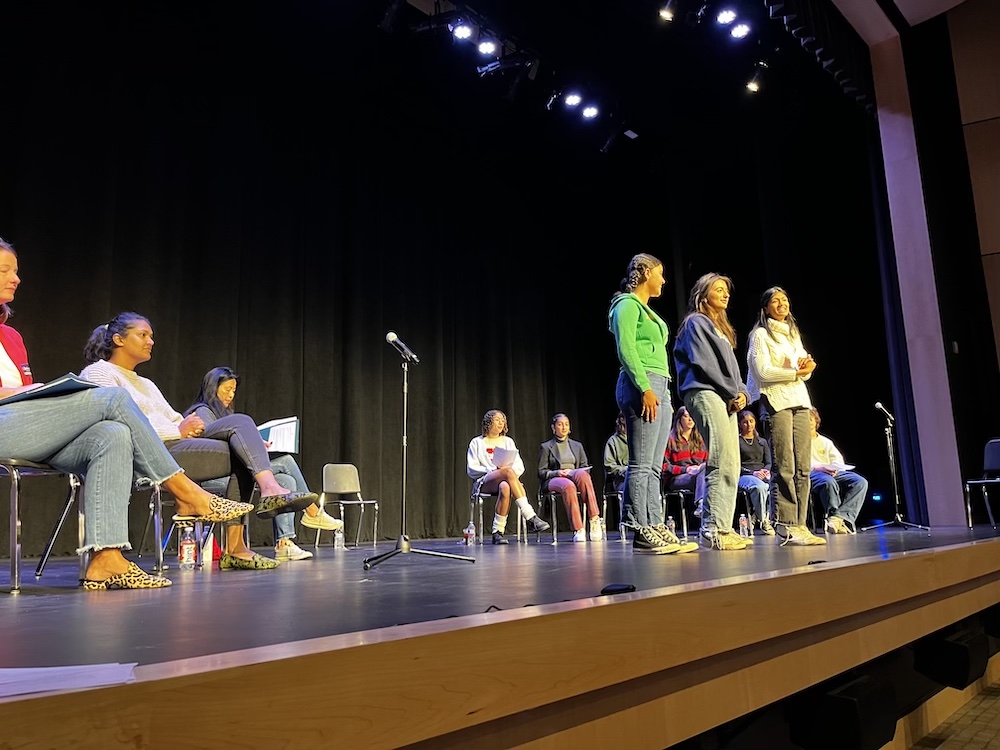 The student moderators introduce themselves and the panelists on Friday, Oct. 28

Although most are too young to vote in the Nov. 8 election, around two hundred students showed up for a first-ever student-led panel at the Alan Harvey Theater on Friday morning to hear directly from the three candidates running for the Board of Education. The event was run by students from the Affinity Mentorship Program with support from the Piedmont and Millennium High School student government.

“The candidates have spent a lot of time attending community forums and parent club events, but we thought it was important for them to spend some time with the students who are most affected by their decisions,” said Elena Stevens, one of the event’s panelists, in a phone call on Thursday.

On the surface, candidates’ answers signaled agreement on broad principles — mental health is important, schools should create an accepting place for all students and offer an engaging and challenging curriculum, the school district needs to do a better job at communicating and addressing racial and anti-semitic incidents, but Medhekar and Thomasson, who have spent the last several years serving on a range of school committees, were able to speak more specifically about board policy, especially in regard to declining enrollment and inter-district transfers.

The answer that most clearly distinguished the candidates from one another was in response to a panelist question about curriculum. When asked what the candidates thought about the merits of teaching the 1619 Project and the 1776 Report side by side* and letting students form their own opinions about U.S. History, Hooi said that she believed that the district should offer two curriculum “pathways” and parents should be able to choose between them. (This assertion aligns with Hooi’s other public statements that emphasize parent choice in school matters. Most recently, at the Oct. 26 school board meeting Hooi asked if families could opt out of the district’s social – emotional curriculum.) Both Thomassan and Medhekar agreed with the side-by-side approach and spoke to the importance of understanding and wrestling with a range of perspectives in order to for students to be prepared for the wider world after high school.*

They can’t vote yet, but students are leading on issues that directly affect them

Driven by current events, students across the country have become more active in their school districts and at state and national levels. Gun violence, police brutality, and climate change are top issues for students across the country. In Piedmont, students have organized and participated in climate marches, protests after George Floyd’s death in the summer of 2020, and held a walkout and rally to protest gun violence in 2022.

In response to student mental health surveys and activism, PUSD has increasingly worked in recent years to respond to student voices and perspectives. One of the newest efforts has been the formation of  the Affinity Mentorship program, that pairs high school mentors from underrepresented groups with elementary and middle school students.

And for the first time, at the behest of a student, the school board this year upgraded what had been a relatively informal student board representative position to a more formal position as a preferential voting member of the Board. (This means students can vote to express an opinion on a motion but their vote is not counted in determining the vote required to carry any measure before the Board or whether a quorum is in attendance at a Board meeting.) In September the Board approved the appointments of Piedmont High School juniors Siddharth Bhatia and Cleo Tahawi (a panelist in Friday’s event), and senior Gianna Yan as Student Board Members for the remainder of the 2022-23 school year. The three students will collaborate on representing the student voice to the Board and will rotate attending Board meetings.

(*The 1619 Project reframes U.S. history, focusing on slavery and its ongoing legacy. It appeared first in The New York Times, created by journalist Nikole Hannah-Jones, and went on to win a 2020 Pulitzer Prize for commentary. The 1776 Report, commissioned by former President Trump and released in January 2021, and the separate 1776 curriculum – produced by Hillsdale College in Michigan – champion a traditional view of America’s founding.

This article was updated on Oct. 30 to clarify that both Medhekar and Thomasson supported the side-by-side approach as described by the student panelist.)

3 thoughts on “School board candidates respond to student questions at high school forum on Oct. 28”