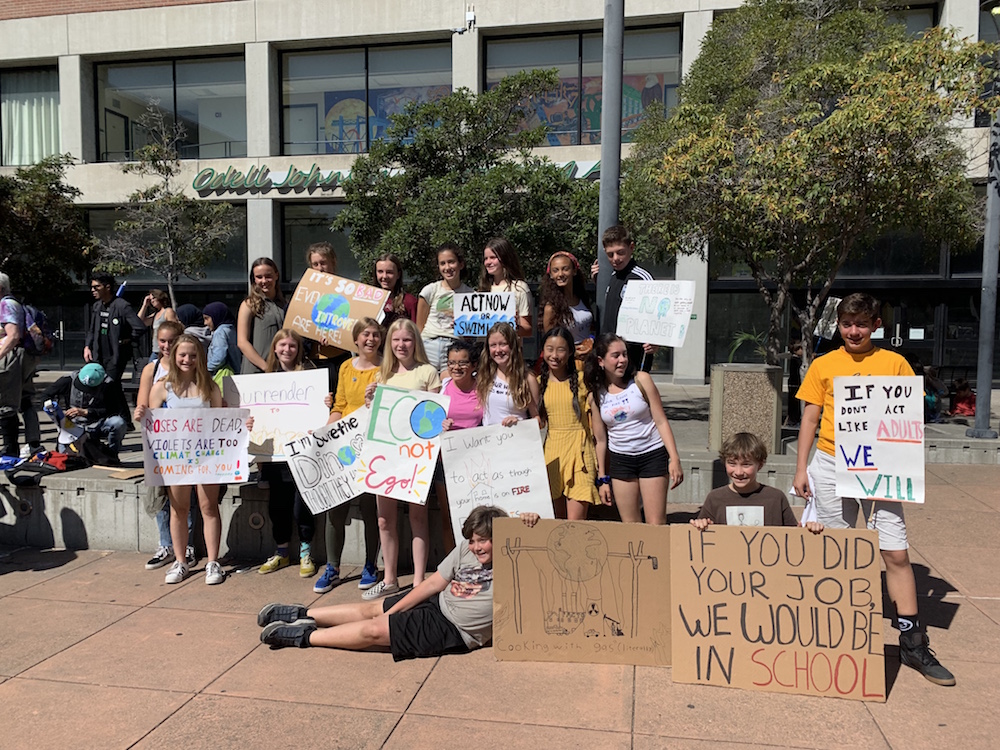 Tens of thousands of young people took to the streets of the Bay Area on Friday as part of worldwide Climate Strike actions calling for more urgent action on climate change. In San Francisco, demonstrators flooded Market Street, where they densely packed the wide street for blocks and blocks. At the University of California at Berkeley, they filled Sproul Plaza with university students joining middle schoolers fearful for their future.

San Francisco’s rally was the largest in the region and drew crowds from throughout the Bay, including many striking students. About 300 students walked out of a handful of San Francisco public schools, district spokesperson Laura Dudnik said. Four hundred students walked out of Berkeley High School and took BART to the San Francisco action. Many students from Oakland schools were attending the rally on field trips. Students participating said that dire forecasts of rising global temperatures made them fearful of the consequences if there is not immediate action.

“I’m scared for our future, if we even have one,” said Otto, a 13-year-old student from San Francisco. Caroline Hench, a high school student from Oakland, said, “I think it’s more important to protest against out climate than go to school because we won’t even be able to do that soon.” Tracey Cook, also from Oakland said, “I think it’s really important the teens’ voice gets heard because a lot of times it gets put to the side. So it’s important we’re here to show we have a voice and be heard.”

The protesters gathered Friday morning near House Speaker Nancy Pelosi’s office at the Federal Building at Seventh and Market streets and took off marching down Market Street at about 10:30 a.m. chanting, “Climate change has got to go” and “Climate justice now.” They marched to U.S. Sen. Dianne Feinstein’s office at 1 Post St. and then marched on to the waterfront.

Organizers for the San Francisco action said that they are calling on Pelosi and Feinstein to back the Green New Deal, an ambitious climate action plan introduced by U.S. Rep. Alexandria Ocasio Cortez, D-New York. They are also calling on corporations like Bank of America, Amazon and PG&E to divest from the fossil fuel industry and improve their own reliance on renewable energy sources. Marchers protested at the Amazon Go store at 575 Market St. and called on Amazon to decrease its dependence on the fossil fuel industry, allow workers to unionize and to also cut its alleged ties to U.S. Immigration and Customs Enforcement.

“Amazon is one of our worst players against the environment, against immigration and against workers rights and we want to see a change from Amazon,” said Andrea Lee, who brought her 5-year-old daughter Aria to the march “I want her to feel powerful and see young people and teenagers leading this movement so that she knows it’s up to her next,” she said of her daughter.

Walkouts and rallies are also planned in Cupertino, Los Altos, Oakland, Palo Alto, Richmond and in more cities across the region. Students at American High School and Washington High School in Fremont both had rallies planned Friday. Students from several South Bay high schools planned to rally at the Diridon station in San Jose this afternoon. Striking students in Marin County gathered at 9 a.m. at the San Rafael City Center at 1002 Fourth St. In Mill Valley, students gathered downtown at 11 a.m. at Depot Plaza at 87 Throckmorton Ave.

In Sonoma County, students gathered at the Central Quad Santa Rosa Junior College at 9:30 a.m. and plan to march to a noon rally at Courthouse Square in downtown Santa Rosa. Other rallies were held across the nation and world, with large rallies in Africa, Asia, Australia, Europe and South America. Actions were planned in 150 countries, including 800 in the U.S. alone. Tens of thousands of people participated in rallies in Berlin, London and New York. Actions are scheduled to continue through next week.