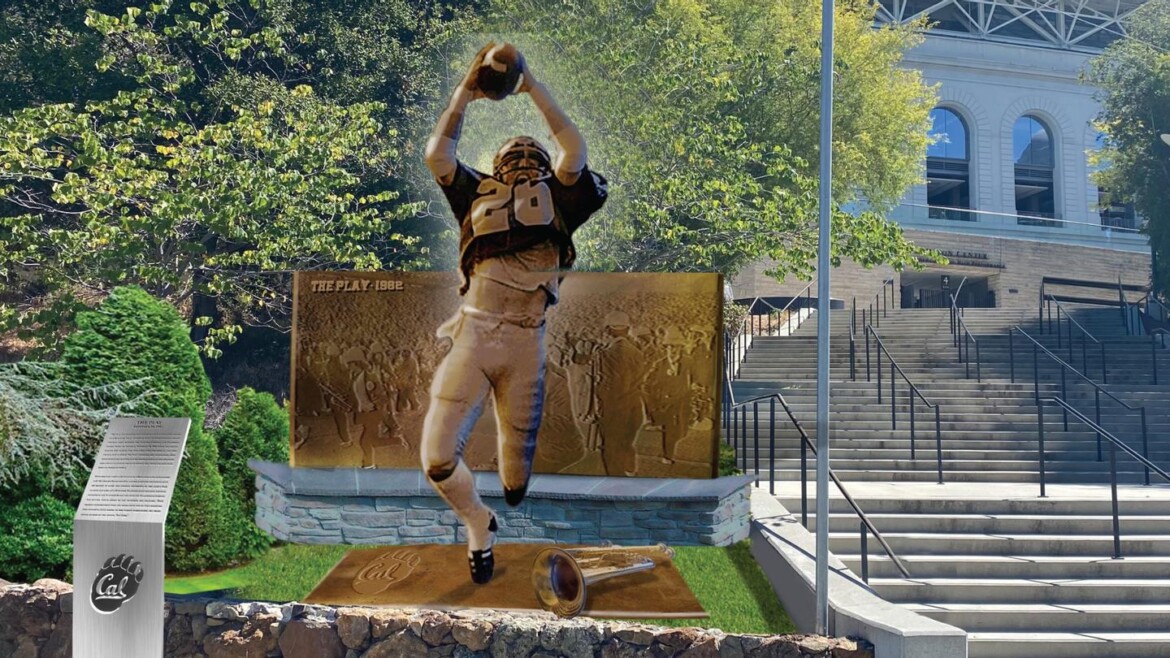 A statue of Kevin Moen – who scored the touchdown that punctuated "The Play" in the Big Game in 1982 – will be unveiled this weekend along Piedmont Avenue on the southwest side of the stadium.

The 125th Big Game between California and Stanford on Saturday, Nov. 19, will be televised by the Pac-12 Network from the California Memorial Stadium in Berkeley at 2:30 p.m. The sold-out game is sure to create some traffic and pedestrian headaches around the Cal campus that day, so plan accordingly if you need to be in the area.

(The stadium briefly known as FTX California Memorial Stadium is no more: According to reporting by Berkeleyside on Friday, Nov. 18:, “UC Berkeley confirmed that it suspended its football stadium naming rights deal with crypto exchange FTX, which filed for bankruptcy last week and is being probed by federal authorities. The 10-year, $17.5 million field naming deal, brokered by sports marketing firm Learfield, was marketed as the ‘first in collegiate history paid 100% in crypto.'”)

This year’s meeting of the Pac-12 and Bay Area rivals will also mark the 40th Anniversary of The Play, a five-lateral kickoff return for a touchdown through the Stanford Band that lifted California to a win in the 1982 Big Game and is arguably the most iconic moment in college football history and all of sports.

The first 10,000 fans through the gates for the 125th Big Game will receive a replica Axe giveaway.

The rivalry between the Bay Area’s Pac-12 schools dates back to 1892 and is the sixth-longest active running series between two Football Bowl Subdivision teams. The series is also the sixth-longest overall between two FBS programs and the second-longest in the West. The Big Game has been determined by a touchdown or less 54 times and on five occasions has been won on the final play, including The Play in 1982.

Cal has won two of the last three games between the teams including a 41-11 victory over the Cardinal in a record-setting performance on The Farm in the most recent Big Game on Nov. 20, 2021. Cal produced a Big Game-record 636 yards of total offense in the victory including 352 on the ground, while the 30-point margin of victory was its largest since a 41-6 win in Berkeley on Nov. 20, 2004.

Additional information on the all-time series can be found at CalBears.com.

“Pac-12 Tailgate” will also be in Berkeley to air a half-hour show prior to the contest that will celebrate the sights, sounds, traditions and fanfare of the California campus and the 125th Big Game. Cal’s regular-season finale against UCLA on Friday, Nov. 25 will be televised by FOX and kick off at 1:30 p.m.

Radio broadcasts of all Cal football games can be heard live on 810 AM, the Golden Bears Sports Network powered by the Northern California Auto Dealers, The Varsity Network App and Sirius XM. Cal play-by-play radio announcer Joe Starkey will retire at the end of the 2022 campaign after 48 seasons in the role and be celebrated on Joe Starkey Day against UCLA.