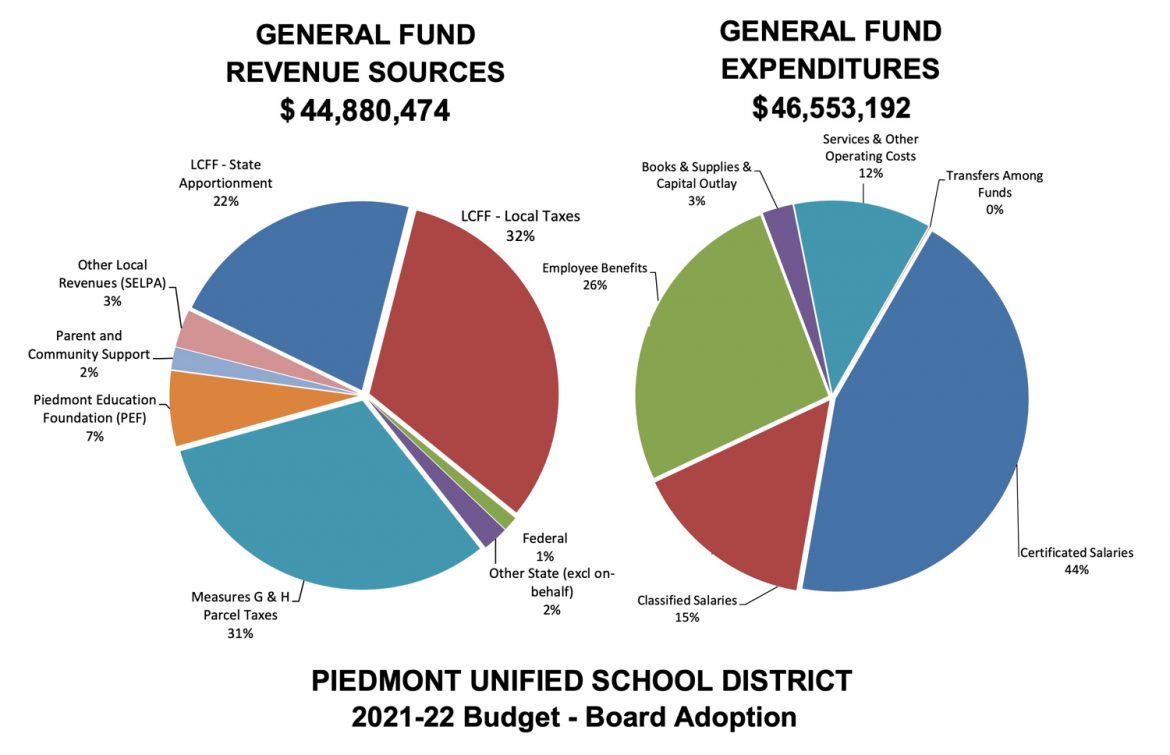 At their final meeting of the 2020-2021 school year, Board of Education members met in the district board room for their first in-person meeting in over a year. The June 23 meeting was spent approving a series of end-of-year budget items and approving the district’s three-year LCAP plan. Trustees also heard from incoming APT president and PHS computer science teacher Flint Christensen, who replaces Gabe Kessler in that role.

The increase is necessary, the recommendation says, because of anticipated shortfalls of over $1 million in 2022-2023 due to a decline in enrollment and increases in CalSTRS and CalPERS contributions.

Members of the subcommittee are Linda Morrell, Betty Winnacker, and Julie Caskey. You can read their Measure G and Measure H tax levy recommendations in the accompanying board materials HERE.

Trustees voted 4-0 to approve the 2021-2022 budget presented by Chief Financial Officer Ruth Alahydoian. Districts are required to adopt their budgets prior to June 30 of each year for the next fiscal year whether or not the state has adopted its budget. PUSD will be able to maintain its required 3 percent reserve for 2021-2022 and can set aside $800,000 of Measure H funds for salary negotiations, but expects to have a $1.4 million shortfall starting in 2022-2023 due to declining enrollment and rising pension costs.

Alahydoian said there were no significant changes to programs from the current school year except for the following:

Trustees have been grappling with ways to address an anticipated drop in PUSD enrollment for the last couple of years, and considering ways to use interdistrict transfers to boost numbers and diversity. School districts have been “held harmless” by the state for enrollment dips during the pandemic, but that provision will disappear by 2022-2023 when districts must start using actual enrollment counts. A drop in enrollment equals a drop in state revenue.

Superintendent Randy Booker told the board that he has sent out around 45 IDT acceptances so far this year, but said that not everyone actually ends up enrolling and that there is a “wait and see” element in play as new families move into the city over the summer. PUSD will review its numbers in August, he said.

The board also approved several other routine administrative budget items to close the year:

Trustees voted 4-0 to approve the three-year Local Control Accountability Plan (LCAP). The LCAP is a three year plan that all school districts in California are required to create and execute as part of the state’s Local Control Funding Formula (LCFF). The LCFF was a 2013 initiative by Gov. Jerry Brown that gives school districts more control over how to spend state money, and also gives additional state funds to districts based on the number of low-income students, English learners, foster children, and homeless youth they serve.

“We have a lot of ambitious action items,” said Assistant Superintendent Cheryl Wozniak, who told the board that work on prioritizing those goals would start the week of June 28 versus waiting until the school year began. An emphasis on addressing the impact of COVID as well as equity and inclusion are woven throughout the document. (You can view the document in the Board materials HERE.)

“It’s important that the public be informed regarding how LCFF money is spent.” She said the district would be holding an LCAP engagement meeting in September.

Wozniak said one area of focus, derived from the results of the pandemic survey administered in early 2021, was to improve the level of trust in district leadership from a baseline of “6 stars” to “8 stars.” Trustees agreed with that goal.

Earlier in the meeting, PHS computer science teacher Flint Christensen spoke to the board in his new role as president of the teachers’ union.

“I‘m moved by what my colleagues have gone through over the last 15 months,” Christensen said.  “Morale is a little thin, but this summer is going to be very good and they won’t be working 18 hours a day like last summer.”

Christensen said he intended to focus on three things in his role as the face of 200+ educators:

Board President Cory Smegal reported that the in-person listening sessions they have held to date at the Exedra plaza’s blue vase appeared to be helpful in healing some of the rifts that occurred within the school community over the last year due to the pandemic-related school closures. “We have appreciated these conversations and will figure out ways to hold more,” Smegal said. “It is important to keep a conversation going.”

Community members — parents, staff, residents — could sign up to attend one of seven outdoor meetings with two rotating board members and, on some occasions, the superintendent, from May 28 through June 30.

Piedmont Education Foundation Executive Director Heather Frank told the board that she had the opportunity to participate in training for community-building circles that included therapists and paraprofessionals and teachers at all levels “to make sure that when students come back next year they come back to the support they will need,” she said. “I was very proud to be part of that and to take that example forward. Thank you all for powering through this year.”

Smegal noted the district was in the process of hiring a new director of special education and has been holding several focus groups with stakeholders.

School starts August 10 and the next regular Board of Education meeting is on August 11. The plan is to hold the next meeting in City Hall in a hybrid manner (some participants in-person, some online.)

One thought on “School Board approves budget, LCAP at final meeting of 2020-2021 school year”