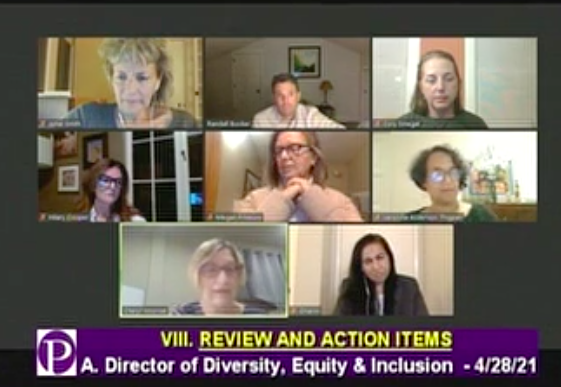 New Director of DEI Dharini Rasiah appears in the lower right of the screen during Wednesday's virtual school board meeting.

As fallout from Assistant Superintendent Cheryl Wozniak’s poorly worded “white support group” email continued this week, working its way through social media and into the national news, the board of education — along with district administrators — took time at the top of Wednesday’s school board meeting to address the uproar and reaffirm its commitment to anti-racism work that began in earnest last summer.

“We acknowledge that damage has been done,” said Board President Cory Smegal. “Yet we ask this community — our students and their families, our educators and administrators — to commit to the anti-racism journey with us in solidarity. This commitment means that we walk in tandem and in support of each other despite the difficulties. It means that a misstep is an opportunity to learn and provide support. It means calling each other in rather than calling each other out.”

“We are just beginning our journey to becoming an anti-racist district,” she continued. “It will be a long one and if we are determined to realize success then we must commit to staying the course.” (You can read her full statement HERE.)

CSEA President Nicole Straley asked people to remember that “intention matters” and called on PUSD to lead with compassion and understanding.

Wildwood Principal Carol Cramer spoke on behalf of all school site principals, reaffirming their commitment to the district’s antiracism efforts. “To take a stand as an educator feels dangerous at times. It would be easier to talk without action. Instead, we choose to take action knowing that the work is hard and that we will make mistakes. We talk to students about growth mindsets and making mistakes. We know this is how we grow.” Kramer said. “For past seven years Dr. Wozniak has been putting her own comfort and privilege aside in order to act. We could list so many ways that Dr. Wozniak has stood up and demonstrated courage and integrity. At a time when one misstep can overshadow all that we’ve done, let’s keep our attention on repairing the harm and supporting students and staff.”

Millennium High School Principal Shannon Fierro described a restorative justice circle that took place with Wozniak, MHS students, and Black Student Union advisor Ina Benditch this week. “It was an hour-and-a-half long conversation that was respectful, emotional, and challenging. We talked about race and affinity groups and social media. We made plans for what happens next,” she said. “In the world of social media, success means going ‘viral.’ That’s toxic communication that does not support any of us, but the communication that I was a part of yesterday was the antidote. You won’t ever read about it in the newspaper. It takes time and is vulnerable, hard work.”

“This is challenging work no matter who we are,” said Piedmont Middle School teacher Gina McKuen, the only African American teacher in the district. “PUSD has significantly improved since 1997. Is it perfect? No. But I have been impressed with PUSD. It is challenging to admit a mistake.”

“Intentions are good but we’re looking for actionable commitment. We need administration support and to know we are heard,” said Piedmont High School senior Lynnea Bao.

The Piedmont Education Foundation’s executive director, Heather Frank, reported that the Grants Committee, which meets annually with PUSD to discuss how to distribute funds raised during the year, had made equity a priority and that included funding 25 percent of the new director of diversity, equity, and inclusion position, as well as stipends and materials for the DEI council.

“Recent events have highlighted the very real challenges that the district faces to meaningfully and effectively implement the Racial Equity Policy. We encourage district leaders and the school board to take this moment to consider how well positioned the district is, right now, to successfully execute on its commitments in the policy?” — Sheila Leunig, co-president of the Piedmont Anti-Racism & Diversity Committee (PADC; you can read her full statement HERE.)

“We see the recent issues as an opportunity to engage more deeply, listen and learn around the questions some in our community might have around the situation: Why might Black, Indigenous and other People of Color need their own space? How will white people learn if they aren’t in spaces with BIPOC? These are great questions. We should engage in them. But also: What are each of our schools doing to improve equity and justice? As a parent, what’s my role? What conversations should I be having with my kids and my community?” — Diana Lee, Piedmont Racial Equity Campaign (PREC; read her full statement HERE.)

Board approves appointment of Dharini Rasiah to lead diversity, equity, and inclusion efforts

Wozniak announced the selection of filmmaker and teacher Dharini Rasiah as new director of diversity, equity, and inclusion, and the board unanimously ratified the appointment. She said there had been over 40 applicants for the part-time (.6 FTE) position and that during the selection process the top four applicants were invited to submit videos and a written statement before they met virtually with the hiring team over a period of weeks in March.

According to her memo, the interview panel consisted of 17 members representing classified staff, teachers, administrators, high school students, members of PADC and PREC. The school board interviewed the four strongest candidates. The complete interview process consisted of four rounds.

Rasiah gave a brief statement to the board at the Wednesday meeting to say she had already started meeting with members of the administration. PUSD did not provide a bio for Rasiah. Her Linkedin account says she attended UC Berkeley and UCLA.

The board and PEF gave Rasiah a warm welcome, and others called in to express their support.

“We are to excited for you to begin your work as we believe it is an important part of the district achieving its stated racial equity goals,” Jennifer Long, the co-president of PADC said to her after the announcement.

“We look forward to meeting you and partnering with you,” said Diana Lee of PREC.