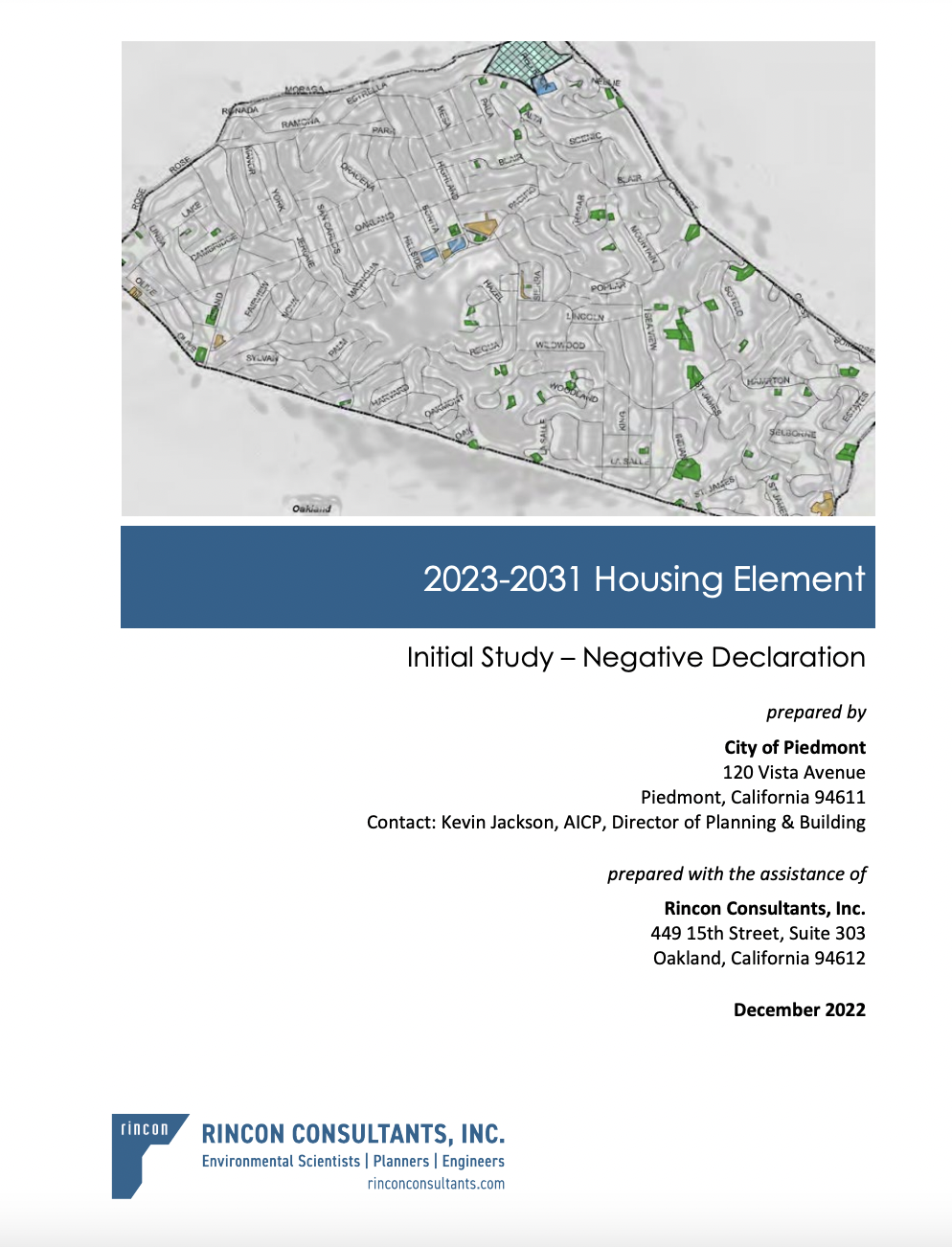 The city says as a policy document, the HE alone will not have adverse physical impacts on the environment. Physical changes that would result from the implementation of policies and programs proposed in the Housing Element are currently being studied as part of an Environmental Impact Report.

From the City of Piedmont on Dec. 9. (Language in third paragraph bolded by the Exedra for clarity.)

The City of Piedmont has released an Initial Study-Negative Declaration (IS-ND) for the City’s proposed 6th Cycle Housing Element. The IS-ND is available for public review and comment through Jan. 8, 2023.

This is the next step in the City’s Housing Element update, a process that has been underway since Spring 2021. Part of Piedmont’s General Plan, the Housing Element outlines a series of proposed policies and programs that would allow the City to accommodate the development of 587 new homes by 2031 – a number assigned to Piedmont by regional authorities. Adopting a Housing Element does not require these homes be built. Rather, the purpose of the document is to demonstrate that the City has a plan for how it could support this growth.

Community members who wish to provide feedback can send comments in writing to Planning and Building Director Kevin Jackson by email at kjackson@piedmont.ca.gov, or by mail at 120 Vista Avenue, Piedmont, CA 94611.

Next Steps: Adoption, Programmatic EIR, and Implementation
The City submitted its proposed Draft Housing Element to the California Department of Housing and Community Development (HCD) for review on Nov. 18, 2022. HCD will review the City’s Draft Housing Element for compliance with State law. If reviewers determine that changes are needed, Planning staff will work with HCD to develop any necessary amendments, then bring the proposed updates to City Council for approval.

After the City Council adopts the Housing Element, the City will have three years to implement a substantial number of the proposed programs and regulatory changes outlined in the document. This process involves additional environmental review, which is already underway – the City is currently in the process of preparing a programmatic EIR that studies the impacts of the new homes and residents that could come to Piedmont once implementation is complete.

For questions about the Housing Element process, write to PiedmontIsHome@piedmont.ca.gov.