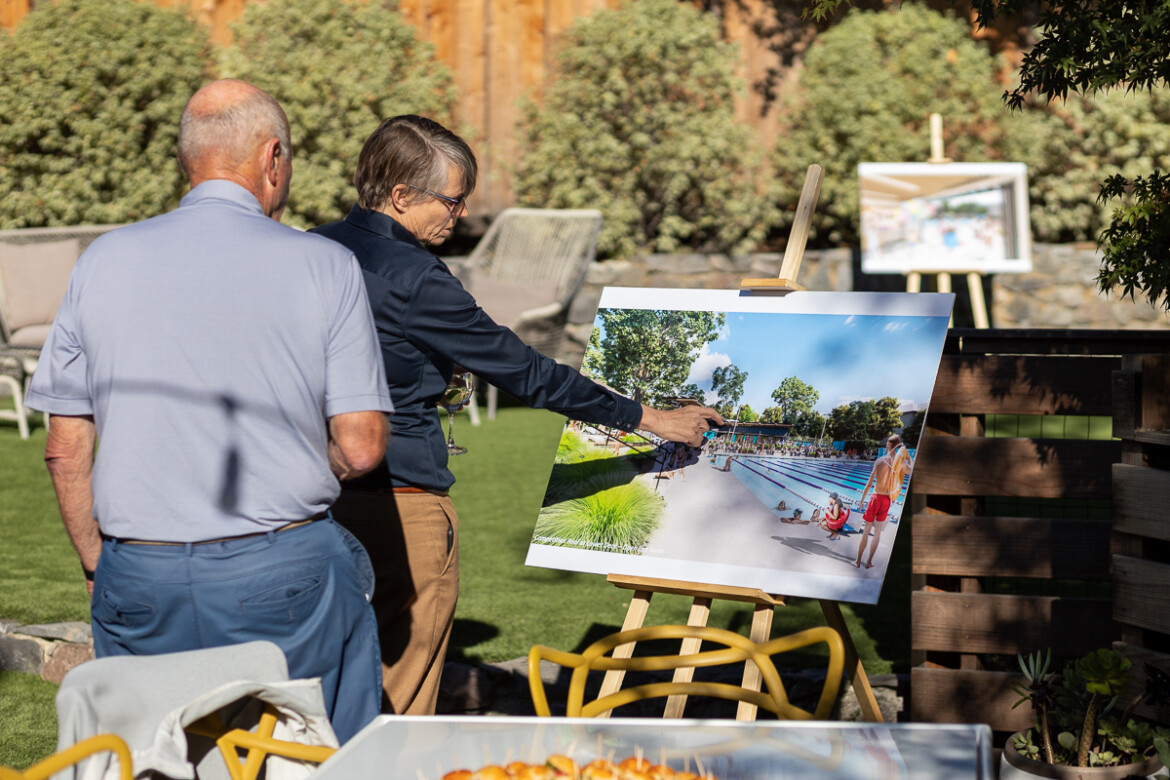 Sara Lillevand discusses the new pool and buildings with a Piedmont resident in August.

From a City of Piedmont press release on Dec. 6:

The City of Piedmont invites community members to a groundbreaking ceremony for the new Piedmont Community Pool on Saturday, Dec. 17 at 11 a.m. The ceremony will be held on the grounds of the pool site at 777 Magnolia Avenue.

The Piedmont City Council voted unanimously to award a contract for construction of the new pool to Wickman Development and Construction at their Dec. 5 meeting. (See Exedra reporting on that meeting HERE)

Construction is expected to begin in early 2023, and the new pool could open as soon as summer 2024, according to the city.

“It took the collective effort of hundreds to reach this point, including current and former Councilmembers, City staff, Commission and Committee volunteers, consultants, and most important — the community advocates who have tirelessly pursued the vision for an aquatics facility that truly meets Piedmont’s needs, some of whom have been working towards this goal for over two decades” said City Administrator Sara Lillevand. “I hope many community members will join us on December 17th to celebrate this monumental milestone.”

Originally opened in 1964, Piedmont’s now-shuttered pool had exceeded its useful lifespan and had long lacked adequate space to meet the community’s diverse aquatic athletic and recreational needs. Although there have been several efforts to explore feasibility of a new facility over the years, work on the pool replacement project began in earnest in 2015, with the development of the Aquatics Center Conceptual Master Plan.

This vision drew closer to reality in November 2020 with the passage of Measure UU, which authorized the sale of $19.5 million in general obligation bonds to fund the new facility. A sharp rise in construction costs beginning in 2020 further threatened the project’s feasibility, leaving a gap of more than $2 million between project cost estimates and available funds even after the City Council scaled back the original design to include only essential components.

To close the gap, the City has partnered with the Piedmont Recreational Facilities Organization (PRFO) to raise $2.1 million for the completion of the new community pool as designed. This capital campaign, which began in August 2022, looks to build on the success of previous PRFO fundraising in support of Hampton Park and the Corey Reich Tennis Center. As of December 5th, 2022, PRFO is nearly halfway to the fundraising goal of $2.1 million.

The City of Piedmont and the Piedmont City Council remain grateful to the community for their ongoing support for the new community pool project. For more information on the project, visit piedmont.ca.gov/newpool. For information on the PRFO capital campaign, visit prfo.org/piedmont-community-pool.