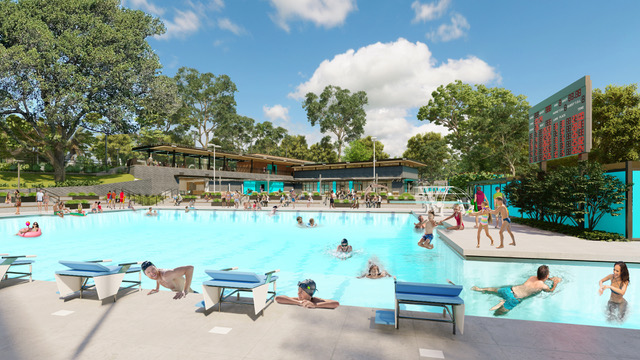 The City Council on Monday awarded a $21.7 million contract to a San Francisco-based construction company to build the Piedmont Community Pool project.

Also included in that unanimous vote — which drew applause in the council chamber – was approval of a $23.87 million estimated construction budget, which includes a 10% contingency to cover work changes or unforeseen issues that can crop up.

The company, Wickman Development and Construction, submitted the lowest of four qualified bids the city opened on Nov. 16. Monday night’s vote was expected, as the city on Nov. 21 announced the prospect of a contract award on Dec. 5.

Wickman was one of four project bidders that responded when the city re-bid the project after receiving in October bids from two pre-qualified contractors, both of which exceeded city contract estimates by more than 15%. By that time, the pool project had already been significantly downscaled to cut costs.

As it stands, the Wickman contract will cover a single-story pool building with an office, lobby, locker rooms, two gender neutral changing rooms and a rooftop pavilion; a 27-meter-by-25-yard competition pool with diving well; a 3,177-square-foot “activity pool” with zero beach entry and three 25-yard lap lanes; an all-electric-powered aquatic center (including the building and the pool water heating systems); a poolside multipurpose room; and competition pool toe ledges.

Other amenities — competition lighting, a storage enclosure, a scoreboard and timing system and composite decking — can be built if and when funding allows, City Administrator Sara Lillevand said.

The all-electric aspect is a “model project” in California, said Clarence Mamuyac,  president and CEO of Berkeley-based ELS Architecture and Urban Design, which did the pool’s schematic design. It’s the second such program in the state, he said.

Council members had several questions about Wickman and the future process in general, and Jon Hughes of Griffin Structures, the project manager for the pool construction project, provided some reassurances. He told the council that his firm will meet regularly with Wickman and ELS, providing weekly reports, and will pay close attention to work progress with an eye to making sure things are being done right, and on budget.

“There’s a lot of risk management embedded in this contract,” Hughes said. “We recognize that this is the biggest project (the city) has ever spent money on.”

Jonathan Wickman, an owner of the construction company, told the council his company has worked in the past with some of the firms involved in the Piedmont pool project, and is ready to go on it.

The hope is for construction work to begin early in 2023.

The projected overall cost of the pool project is about $28 million. Most of the construction money will come from bond proceeds enabled by Measure UU, approved by Piedmont voters in  November 2020. Other funding, about $2.1 million, is expected to come from an ongoing Piedmont Recreational Facilities Organization capital campaign, and the city continues pursuing funds from other sources to pay for fully electrifying the pool.

Eric Havian, a PRFO board member, told the council Monday night that $1 million of that amount is already either in hand or has been pledged.

Former Mayor Robert McBain, representing the Piedmont Beautification Foundation, acknowledged a building project isn’t typically a cause the foundation would throw its resources behind. “But it’s that important to the city,” he said.

“I think we have all the right people in place,” McBain said, of the city staff, contractors and community supporters. “I think if any city is going to do it, we’re going to do it.”

A significant portion of Monday’s meeting was spent on a broader discussion of what happens next with the pool other than construction, including finances and operations.  Stuart Isaac of the Isaac Sports Group consulting firm, based in Ann Arbor, Michigan, said everything — expenses, revenues, fees, user counts, interest from swimmers from outside of Piedmont — will be substantially higher than with the city’s old pool, which closed in March 2020.

Isaac told the council he projects the pool will be “in the black” in its third year – based on an envisioned summer 2024 opening date, that would be 2026-2027 – with estimated revenue of more than $1.6 million.

A key discussion was how to staff the aquatic facility, especially in light of an ongoing national lifeguard shortage. Isaac said he recommends the city hire two administrators (including an aquatics supervisor)  specifically to handle pool matters at least eight months before the expected opening date. Concerning lifeguards, paying them at least $18 an hour, paying for training and establishing recruiting pipelines early – with young and old candidates alike – are all crucial.

Isaac said the pool facility is likely to attract many more users from beyond Piedmont than the old pool did, and that a two-tiered fee structure will be in place, for residents and non-residents.

There are plenty of users within Piedmont’s borders, too. “We have so much pent-up demand for the pool,” said Councilwoman Jen Cavenaugh.