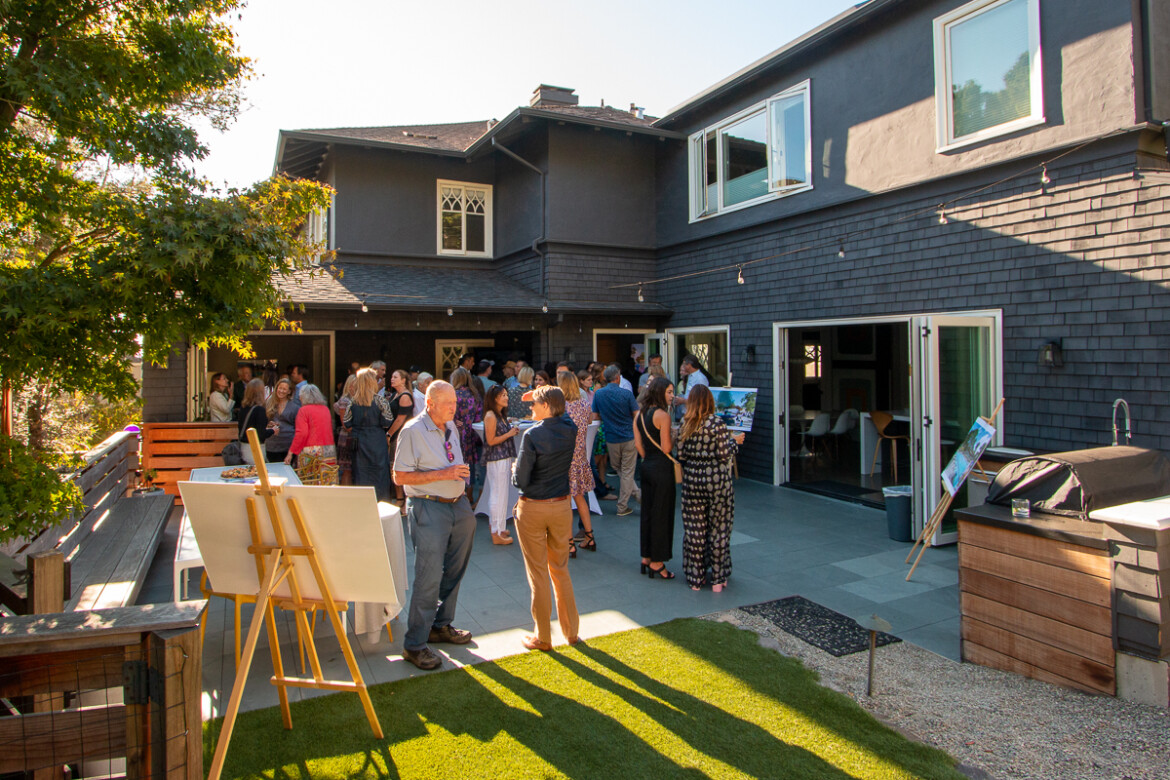 Longtime pool advocates and city leaders came together on August 25 to kick off the capital campaign.

On Thursday, Aug. 26, the Piedmont Recreational Facilities Organization (PRFO) hosted a cocktail party at the home of Anja and Chris Hart to kick off a capital campaign to raise up to $2 million to fund the completion of the Piedmont Community Pool. The event was attended by longtime advocates for the pool project as well as past and present city leaders.

The Piedmont City Council approved the launch of a capital campaign at its Monday, Aug. 15 meeting, the same day it approved putting the pool project out to bid. Due to rising construction costs, the city says several of the key elements of the project will not be funded without contributions from private sources. A gap of approximately $2,000,000 exists between the available bond funding and the projected cost of completing the facility.

PRFO is a 501(c)3 organization that works to encourage and actively support the development and/or improvement of public recreational facilities that serve the Piedmont community. The city and PRFO have partnered on similar fundraising efforts for Hampton Park and the Corey Reich Tennis Center.

The 60-year old Piedmont Community Pool was originally run by a private club, but the city took over operations in 2011. Because of the age and condition of the facility, the city has worked over the years to plan for construction of a replacement facility to better meet the community’s needs.

This planning began with a conceptual master plan approved by the Council after community input in 2016-17. Work continued with the November 2020 passage of Measure UU which authorized the sale of bonds to provide the bulk of the funding for the project. Work has continued since then, with the Council selecting ELS Architecture and Urban Design in October 2021 to design the facility, and many public meetings to gather input and improve the design of the pool. In April 2022, the council approved plans to build an all-electric pool. Due to rising construction costs, the design was revised significantly in spring 2022 to bring down the cost of the project.

Despite alterations, the city says several of the key elements of the project will not be funded without contributions from private sources. A gap of approximately $2,000,000 exists between the available bond funding and the projected cost of completing the facility.

“The City Council is grateful to the voters of Piedmont for approving the bonds to fund the project,” said Mayor Teddy Gray King. “The Council has worked tirelessly with the project team, the Pool Advisory Committee, and the community to optimize a revised design that will make Piedmont proud, both in terms of the facility and its environmental impact. As envisioned, the Piedmont Community Pool will be a recreation hub in the center of town that will bring all segments of our community together. The City is grateful to PRFO for its support to help bring
this remarkable project across the finish line.”

“In the midst of uncertainty and extreme hyperinflation, the project team, the City Council, and the community have stayed the course to ensure that this facility is what Piedmont needs,” said City Administrator Sara Lillevand. “We are pleased to partner again with PRFO for this worthy cause.”

One thought on “Fundraising for pool project gets underway”