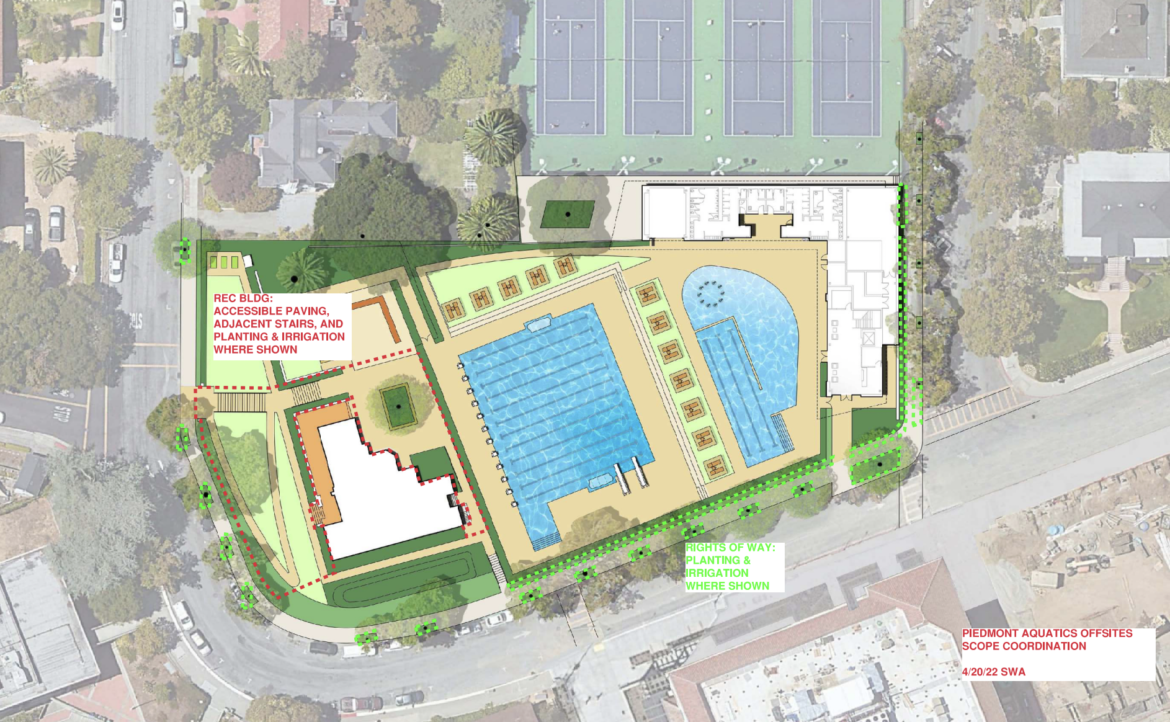 Image of the frontage and right of way areas now included in the pool construction plan.

Looking to save time, money, and mitigate risk associated with the extra work the city would have to undertake to improve public right of ways around the new aquatic center site, the City Council on Monday night approved an amendment to the agreement with ELS Architecture and Urban Design that allows ELS to include that work in its bid to contractors. The Council approved an appropriation of $75,140 from the Facilities Capital Fund to ELS to cover the additional design services.

Measure UU money covers only the “inside the fence” work while the “outside the fence” work — the sidewalks, parking strip, and roadway — would be paid for by the city. Councilmembers asked for assurances that the accounting for these two areas could be kept separate. ELS President Clarence Mamuyac and Public Works Director Daniel Gonzales assured them that this could be done, and City Manager Sara Lillevand noted that the pool’s bond oversight committee would be tracking the expenses as well.

The original agreement with ELS did not include improvements to the public right-of-way surrounding the new facility, including Americans with Disabilities Act (ADA) accessibility access ramps, ADA parking, and sidewalk, curb, or tree removal and replacement.

Gonzalez said initial rough estimates for the anticipated right-of-way work could be around $350,000. That would include repairing sidewalks, making drainage improvements at the curb and gutter, and landscaping. Trees on the Magnolia side of the project facing the high school would likely need to be replaced, he said. He also said two ADA parking spaces would likely be added to the parking spaces but they don’t anticipate losing any more spots.

When the pool project last came before the pool project in May, it was expected to be put out to bid in August (instead of October or November), because of concerns that construction costs industry-wide had risen more than 1 percent per month in recent months, with no end to the cost increases in sight. (The Exedra will update that timeline if it changes.)