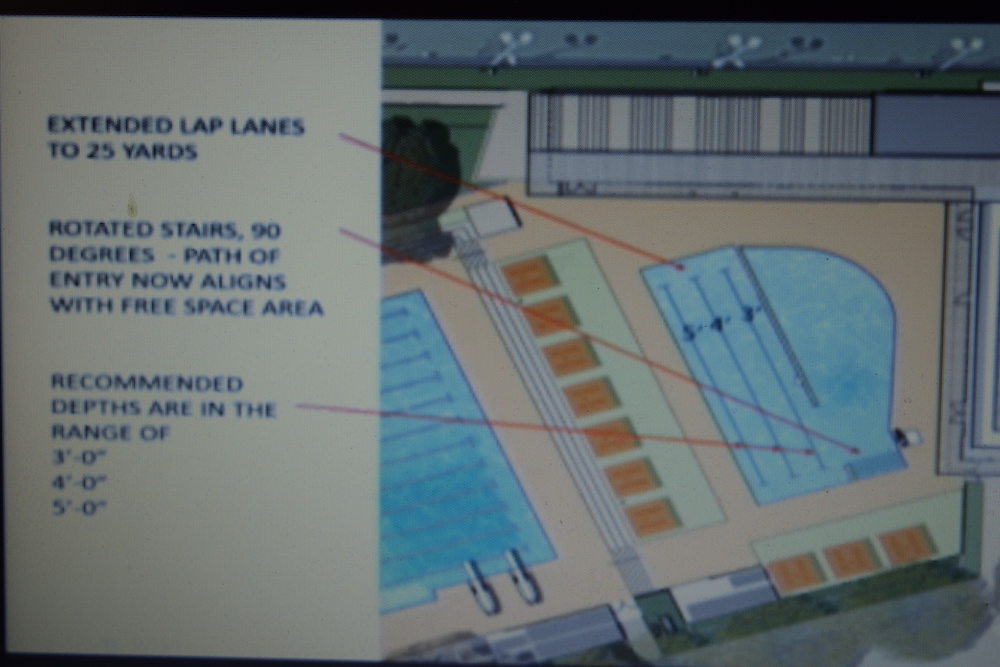 Image from presentation at City Council meeting on May 2.

Acknowledging fast-rising costs and the need to move quickly as a hedge against those costs going up even further, the City Council on Monday formally approved several modifications to the Piedmont Community Pool Project, including to its main building and to its smaller pool, and to approve moving to the construction documents phase of the project.

The project’s design changes and accelerated timeline were undertaken to save at least $6 million from what has ballooned to a projected $25 million project construction cost. The entire Community Pool Project budget is $24.5 million, and the council is working to cap construction costs at about $19 million.

Driven by the reality of “construction cost hyperinflation” affected by both supply-chain shortages of some construction materials and shrinking availability of contractors and construction crews, the council on March 21 made the decision to make changes in the pool complex design. The biggest change was eliminating most of the second story of the main building, including three conference rooms, an elevator, and a stairway.

The fast-rising cost of construction steel was a big factor in that change, as more steel would be needed to support a second story. Eliminating most of the second story will allow an open-air “pavilion” that could be a gathering space or a place to host art installations or possibly a public art piece. The pavilion level will be accessible from Bonita Avenue and the tennis courts, but would not have direct internal access to the lower (pool) level.

The council opted not to go with a proposal for shortening the recreation pool lap lanes from 25 yards to 20 yards, and instead stuck with the longer lap lanes along with a redesign of the adjacent smaller pool. The three lanes will now be 3.5, 4, and 5 feet deep, said Stuart Isaac, a design consultant. A change in entry stairway orientation in this smaller pool also helps accommodate more kinds of programs, including swim lessons, he added.

“It really opens up the pool for a lot of opportunities,” said Isaac, noting that the new pool should be available year round, opening things up for more programs and more and/or different types of memberships.

There was significant discussion Monday night of possible adjustments in the depth of the main regulation pool, most notably about a possible shallow-water “shelf” on one end of the bigger pool. But Clarence Mamuyac, president and CEO of ELS, said that presented problems for some prospective pool users – in water polo, for instance, it would potentially put part of the playing area in shallow water.

Steve Roland, chairman of the city’s Pool Advisory Committee, told the council Monday that the plan all along, through many public meetings, was to cater to as many constituencies as possible, and that the design as presented Monday was a good compromise, and would keep venues for water polo and other sports at regulation dimensions. He said he had thought the back-and-forth about pool size and depth had concluded months ago, until hearing last week there were new questions.

“I think that we have found the sweet spot — I think we have enough water for everyone,” said Roland, whose sentiments were echoed by several public commenters. “I would urge you to pass this thing before you and start building.”

Another way to minimize the effects of hyperinflation is to speed up the construction schedule. And to that end, the council on Monday approved moving to the construction documents phase, in anticipation of getting the pool project to bid sometime in August, instead of October or November as earlier envisioned.

On April 4, the council voted to use all-electric power to heat the new pool’s water, becoming one of the first cities in California to do so.

Councilwoman Betsy Smegal Andersen, acknowledged by many as the council’s most strident champion of the new pool project, made the motion for Monday night’s 5-0 pool project vote.

“This is truly momentous, and I’m a little overwhelmed,” she said.