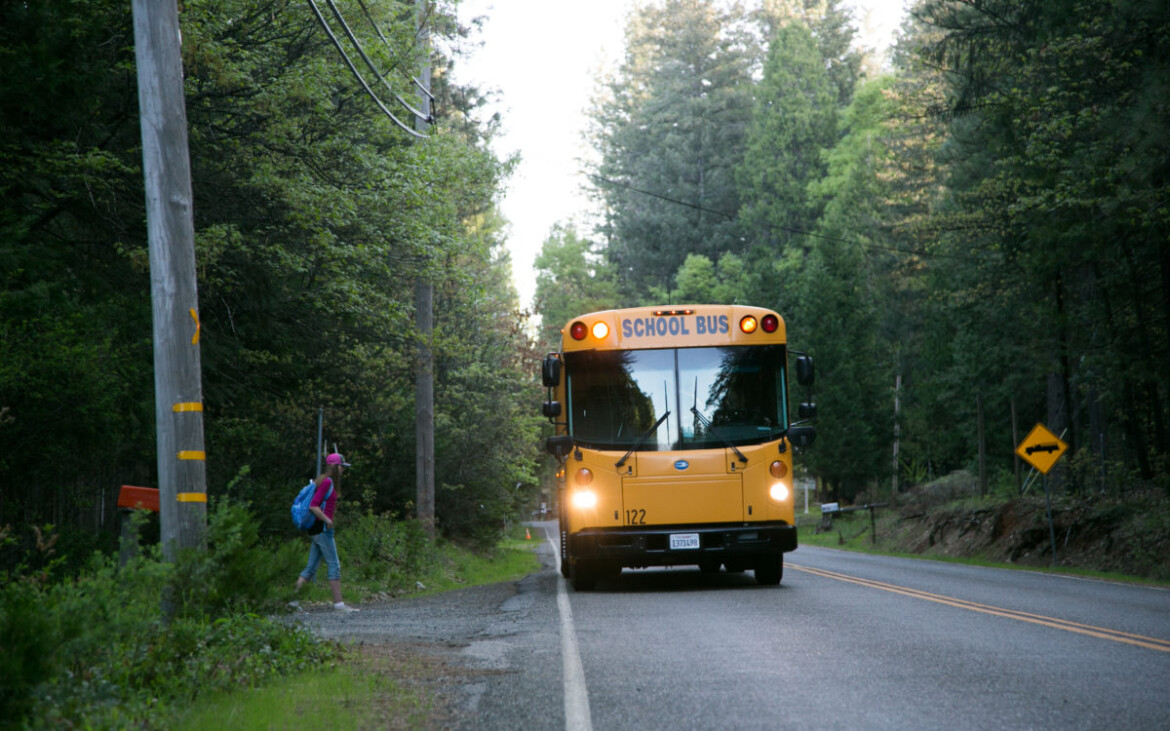 California high schools can begin no earlier than 8:30 a.m. now that SB 328 is in effect. Some districts have found it's saved them money. (CREDIT: JULIE LEOPO FOR EDSOURCE)

As school bells across the state ring at a different time than usual this year for middle and high school students due to a new law mandating later start times, administrators have had to tackle some new challenges, including navigating student and parent needs.

Although the change will kick in at most districts as school begins in the coming days, a few were early implementers, giving them a year or two to fine-tune bus and bell schedules and get feedback from parents.

At Kerman Unified in Fresno County, the 5,230-student district is going into its third year on the new schedule. Superintendent Robert Frausto said he’s addressed the two big issues: transportation and before- and after-school supervision.

All Kerman Unified schools used to begin at 8 a.m., but after social distancing was required on buses during the pandemic, they switched to a tiered system where drivers make two trips: one to pick up and drop off elementary students, and a second for older students. That limited the number of students on the bus at a given time.

Because the start times needed to be staggered for the new system, Frausto said he “might as well bite the bullet” and get in line with the coming law. It was signed in 2019, giving schools three years to make the change.

“In our case, we’ve saved probably three to four drivers,” he said. “So, we’re saving a couple hundred thousand dollars.”

“SFUSD saves about $3 million each year in transportation costs, which can instead be spent on directly supporting students,” she said. “Since start times are spaced out by 50 minutes (7:50, 8:40, and 9:30), each bus can be used to transport students to three different schools.”

“This was unusual for school districts and presented logistical challenges for families and school communities,” Dudnick said.

Parents in Kerman also voiced concern about younger students needing supervision, Frausto said. It was a problem that high schoolers were dismissed later than their younger siblings, and the buses dropped the youngest students off first, leaving them unsupervised until their siblings got home an hour later.

The district is using grant funding along with their district funding “to make sure we don’t have any parents on the waiting list,” he said. “I don’t want that to be an issue.”

For parents who need to drop off students early to get to work, they added hours for instructional aides to help with morning supervision.

Manteca Unified in Stanislaus County will enter its second year on the new schedule. It was a highly unpopular law in the community, according to Victoria Brunn, Manteca Unified’s chief business and information officer.

“A change in schedule that drastically affects us internally and externally,” she said. “Bell schedules are how we run as a system, and when you alter those significantly, it changes the entire operation for students, for families and for staff.”

Manteca Unified has an enrollment of over 23,000 students.

Both Brunn and Frausto said they’ve been able to tweak the start times while still staying within the state’s mandated instructional time.

Manteca Unified high schools were getting out at 4 p.m. last year. One of the biggest lessons the district learned was, “wherever we can squeeze out five minutes, squeeze it out, right?” Brunn said. “Wherever we can cut the school day so that we can get our students to part-time work or to community internships or to their extracurriculars or their co-curriculars, we need to try and do that.”

They managed to shave off half an hour for this year, she said.

“We heard our students last year and our families, and had many conversations with our teachers, (the) union, our leadership team and looking at the mandatory minutes required,” she said. “All those factors come into play, and it’s not easy. It took us an entire year to find that half hour.”

Frausto said his district was playing with the times the last two years and found bus drivers were able to finish their routes earlier than anticipated.

So this year high schools were adjusted 10 minutes back to begin at 8:30 a.m. and elementary schools went 10 minutes forward to 8 a.m.

“Ten minutes believe it or not,” he said, meant a lot to parents and staff trying to get to sports and after-school activities.

As for the cost of the new law, Brunn said the district will now have to get lighting installed in its softball and baseball fields.

“There is less daylight for practices,” she said, adding that electricity is the “second costliest line item in schools.”

When SB 328 went into effect this July, it made California the first state in the U.S. to mandate later start times for teens, amid evidence that their natural sleep-wake cycle is different from children and adults, making it difficult for them to get a good night’s sleep if school starts too early. There are now similar bills in New York and New Jersey.

There is an exemption for rural schools, which some, such as Oakdale Unified in Stanislaus County, have taken.

“There is no schedule that corresponds exactly (to parents’ needs), and we really do need to acknowledge that our teens are suffering and sleep deprivation is making things harder for them,” said Lisa L. Lewis, the author who helped spark the law by writing an op-ed that got the attention of Sen. Anthony Portantino, who authored SB 328.

“I feel like something that’s incredibly important to highlight is mental health and the fact that sleep deprivation absolutely exacerbates depression, anxiety (and) suicidality,” she said.

Lewis pointed out several studies that found later start times do help teens sleep more. Only 22% of teens get at least eight hours of sleep, according to the 2019 Youth Risk Behavior Survey.

The American Academy of Pediatrics recommends teens sleep eight to 10 hours, and in 2014 it recommended school not start before 8:30 a.m.

But Frausto and Brunn have opposing views on whether the law is helping their students. Brunn didn’t think data comparing tardiness in schools from year to year would be very useful.

“That’s a really tough question to answer because of the pandemic,” she said. “Unfortunately, this is coming in at the same time as other variables, so I don’t know that you can isolate it.”

But both offered their own view on the law.

“The impact of this bill was so students were able to get more quality sleep,” Brunn said. “We’re not necessarily seeing that from our student population, that they’re going to bed early.”

As for parent input, “our qualitative data, specifically, is that our parents were not happy with the change, across the board.”

Frausto said he used to be a principal at the Merced City School District, where start times would sometimes “flip flop” from one year to the next.

“What I saw as a principal, and I would say my secondary principals (in Kerman) would agree with this, is that we had a lot (fewer) tardies with the late start time for secondary versus if it were early,” he said.