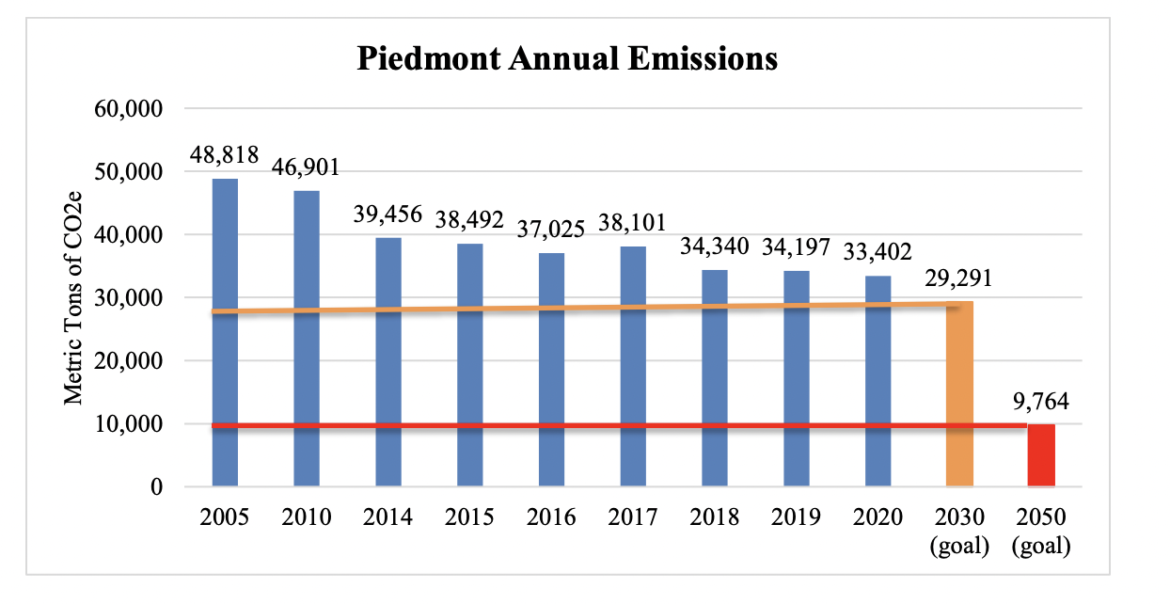 In a presentation to City Council members on Monday night, the city’s sustainability program manager Alyssa Dykman said that unless more action was taken, Piedmont was not on track to meet Climate Action Plan 2.0 goals the city established for itself in 2018 to reduce greenhouse gas emissions 40% below 2005 levels by 2030 and 80% below 2005 levels by 2050.

Although Piedmont saw a 2.3% decrease in metric tons of CO2e (“carbon dioxide equivalent”) between 2019 and 2020, Dykman’s report said that these changes are mostly caused by external forces (such as the pandemic and the decommissioning of the community pool, for example). In order for Piedmont to make meaningful progress toward meeting the CAP 2.0 goals, “the broader community, including all residents of Piedmont, will need to make significant reductions in natural gas use in their homes, vehicles, and daily lives,” she said. This was, Dykman said in her report, going to require greater education and outreach efforts by the city to encourage residents to transition away from gas-powered vehicles to electric vehicles and shift from natural gas to electric appliances in their homes, beyond the efforts made to date.

The report also notes that “significant reductions in emissions will not occur without incentives or regulatory efforts from local, State and Federal governments.”

City can only do so much

Efforts to electrify municipal facilities such as the new community pool and to add EV charging stations around town were important, Dykman noted, but municipal emissions still make up a tiny fraction — just 2.2 % — of the city’s emissions. (Pandemic-driven changes in workplace behavior in 2020 did result in a significant drop in some emissions as more staff worked at home.)

The Greenhouse Gas Inventory report cites the city’s move to replace all gas-powered water heaters with electric heat pump water heaters in city buildings and the Council’s decision to construct the new Piedmont Community Pool as an all-electric facility as positive steps, but said there was more work to be done. That work includes reducing natural gas usage in city facilities through electrification projects, reducing emissions from the city vehicle fleet by transitioning to an all-electric fleet, and finding ways to reduce emissions associated with the vehicles employees use to commute to and from work.

Real change will have to come from homeowners

Because gas vehicles and natural gas use by residents account for 90% of city’s emissions, Dykman made it clear that there was more work ahead. There have been reductions since 2005 — but they are “largely attributed to continued global warming trends, which require fewer heating days, as well as localized decreases in emissions from building appliances and Piedmont’s community and municipal enrollment in East Bay Community Energy’s (EBCE) 100% renewable energy service plan.”

Between 2019 and 2020, Piedmonters actually used slightly more energy in their homes and for getting around.

The most effective way to reduce greenhouse gas emissions from home energy consumption is to substitute electricity generated from low- and zero-carbon sources for oil and natural gas, and Piedmonters appear to support such measures. Surveys conducted in 2020 to build support for new “reach code” efforts showed that two-thirds of respondents strongly support or somewhat support reducing natural gas consumption by revising building codes. The survey followed community meetings with residents and contractors on the requirements formulated by the city and consultants from East Bay Community Energy, the city’s designated power provider.

The Reach Codes and Home Energy Assessment Policy were first approved by the Piedmont City Council in February 2021. The codes are a series of local building requirements designed to bring energy savings and reduce natural gas use in the city, and help regulate new construction, roof extension projects, and home renovation projects. (And for residents considering upgrading gas cooktops, the city has an induction cooktop lending program for residents who want to try it out before converting.)

Of note, but not part of the inventory:

Although Piedmont conducts a GHG inventory annually, the current methodology does not account for consumption by community members that results in emissions outside the City border. If consumption emissions were included in this report, the emissions numbers would be roughly 7 times greater. A consumption-based emissions inventory would reveal that personal choices related to the purchase of products and travel services have as much, if not more, impact on global emissions than do in-boundary activities and energy use. In areas not already captured in staff’s GHG emissions inventory, Piedmont is the highest per capita emitter in Alameda County in the following areas: air travel, goods (e.g., clothing, furniture, small appliances), and services.

The low-hanging fruit has been picked. What’s next?

Councilmembers, while expressing various levels of frustration and disappointment that Piedmont was either stagnating or not farther along in meeting CAP goals, were uniformly supportive of the staff report’s conclusions and sought to better understand how the city planned to tackle some of the more pressing issues. City Manager Sara Lillevand told the Council the city was going to need more community support to tackle some of the next steps.

Dykman’s report outlined steps the community could take next. Of the report’s suggestions, several that appeared to get the most support included: