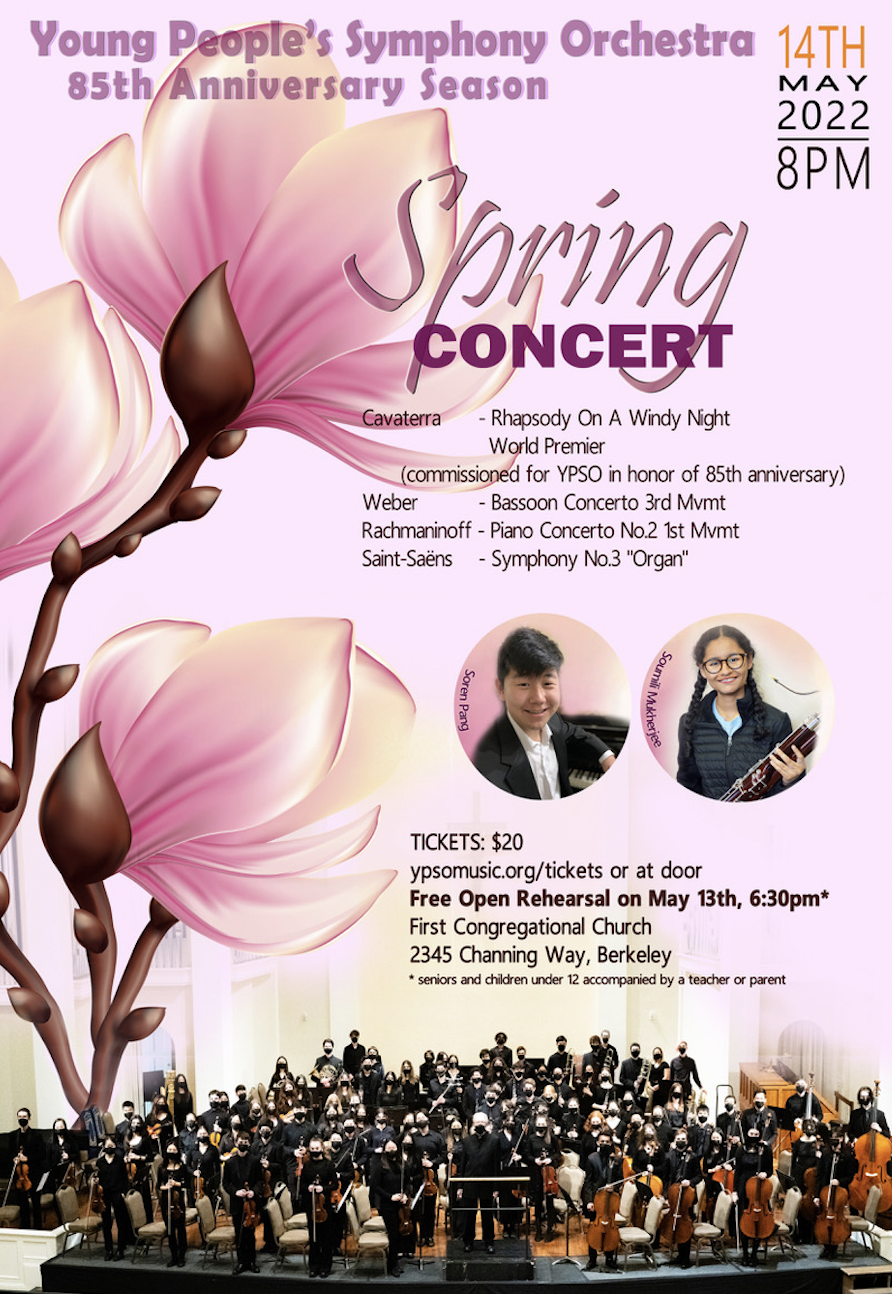 The Young People’s Symphony Orchestra continues its season of live performances with the third of four concerts on Saturday, May 14 at the First Congregational Church of Berkeley (2345 Channing Way) at 8 p.m.

This year, YPSO celebrates its 85th season and Maestro David Ramadanoff his 33rd season as Music Director/Conductor. He will be conducting 94 young musicians who range in age from 11 to 19, and hail from many Bay Area cities. Spring is time of new beginnings, and YPSO will be performing a newly commissioned piece by Jeremy Cavaterra. This world premiere of Rhapsody On A Windy Night is specially composed to celebrate its 85th Anniversary. Cavaterra is a contemporary composer based in California and a long-time friend of YPSO. They have performed several of his pieces over the years.

This concert will also highlight the talents of this season’s Concerto Competition winners – Soumili Mukherjee on Bassoon, and Soren Pang on Piano.

Soumili Mukherjee is a senior at Campolindo High, and will be performing the Third Movement of the Bassoon Concerto by Carl Maria von Weber. It is said that Weber’s father wanted him to be the next Mozart, and in a way he did, because his Bassoon Concerto is one of two most commonly played in the bassoon repertoire – the other being Mozart’s work. The bassoon is a double reed woodwind instrument, and is not often thought of as a typical orchestra solo instrument.

Soren Pang is a violinist in YPSO who won this Concerto Competition with a piano piece. Soren will be performing the First Movement of Piano Concerto No. 2 by Sergei Rachmaninoff. Between the years of 1897 and 1900, Rachmaninoff suffered a mental breakdown and had a serious case of writer’s block after the unsuccessful premiere of his First Symphony. He sought treatment for this, and as a result, had a great comeback with his Piano Concerto No.2, performed in Moscow to great success.

Closing out this concert will be Symphony No 3 “Organ Symphony” by Camille Saint-Saëns – a grand piece featuring the orchestra plus organ – bringing a full and celebratory sound to any concert hall in which it is heard. Saint-Saëns composed this at the height of his artistic career – being dubbed the “Beethoven of France” by Charles Gounod. He led the premiere of this piece in London and Paris with splendid reception, and he wrote “I have given all that I have to give – What I have done, I shall never do again”.

The Annual YPSO Spring Auction kicks off on concert night, May 14, with an online auction full of exciting items to bid on ranging from gift baskets, music lessons, art sculptures, and tasting events. The online auction runs from May 14 to May 29. All proceeds go to support the orchestra, and especially the scholarship students, so that every student will be able to participate in this summer’s tour.

After the spring concert, there will be a pre-tour concert in June, where YPSO musicians will celebrate their high school graduates and do a send-off for their Summer European tour of Leipzig, Prague, and Vienna – performing in world class venues including the Musikverein in Vienna.

Founded in Berkeley in 1936, YPSO is the oldest youth orchestra in California and the first independent youth orchestra in the nation. The 2021-2022 season is the 85th since violinist and conductor Jessica Marcelli founded YPSO at the suggestion of Clarabelle Bell, an amateur harpist and Berkeley resident, who got the idea after hearing the Portland Junior Symphony.

YPSO’s mission is to “encourage young people to become exemplary musicians and young musicians to become exemplary people”. The organization puts on four regular concerts per season. In addition, they reach out through programs such as Bread and Roses and the Bay Area Music Project to bring music into the lives of the surrounding community and encourage the civic development of its students.

YPSO will also host a free open dress rehearsal program on Friday May 13, 6:30 p.m. for families with children ages 12 and under, and elementary/middle school classes accompanied by a teacher. Contact YPSO to make arrangements.

YPSO Safety Policy
*For everyone’s comfort and safety for this concert and open rehearsal, patrons 5 years of age
and older are required to provide proof of vaccination.
*Alternatively, a negative antigen test taken no more than six hours prior to the performance
will be accepted for entry. Patrons may show a time-stamped photo of the test results.
*All patrons must wear a face covering throughout their visit.
*All patrons are expected to self-screen for COVID-19 symptoms before the event. If you have
any symptoms of illness or have had a positive test within the past five days, please do not
attend.
YPSO is funded in part by the Berkeley Civic Arts Grant, Kiwanis Club of Berkeley, Alameda
County Arts Commission, individual and foundation donors, and the friends and families of
YPSO students.

More information about YPSO and the concert HERE