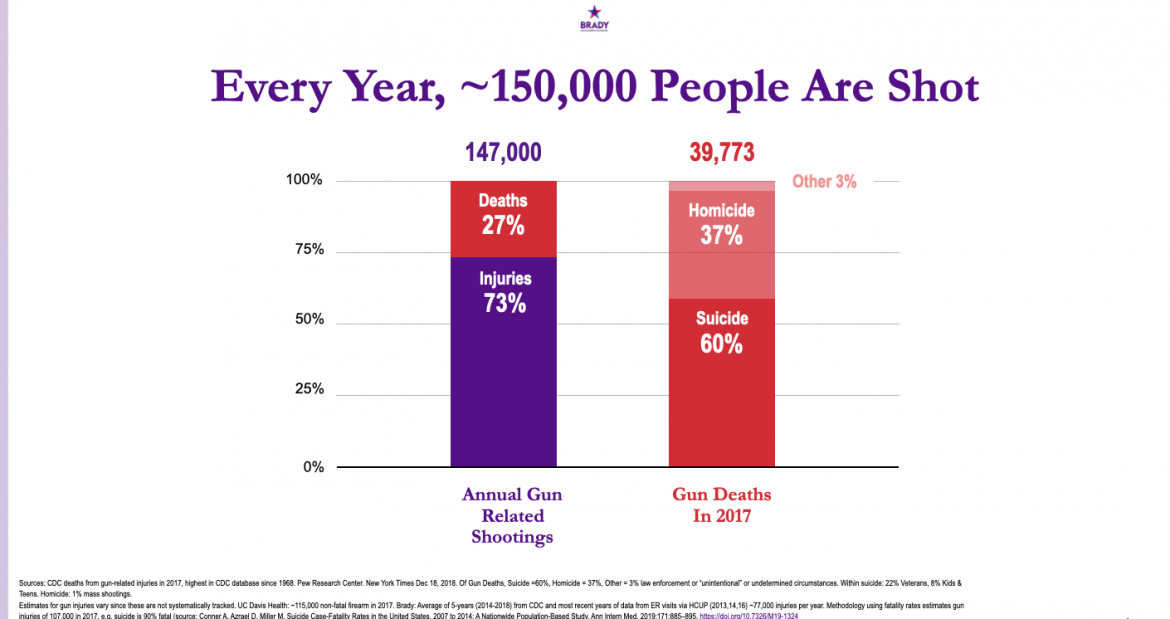 A slide from the Brady United presentation at the April 26 school board meeting.

The City Council is expected in the coming weeks to discuss becoming part of a campaign to prevent gun violence and promote firearm safety, joining with the Piedmont Unified School District, the Piedmont Police Department, and the Northern California Regional Leadership Council of Brady United, a nonprofit dedicated to fighting gun violence.

The council on Monday night heard from police Chief Jeremy Bowers, schools Superintendent Randy Booker and Piedmont’s Steve Roland, affiliated with Brady, who all told the council they are working together to start a local campaign to fight a rising tide of gun violence in the United States.

“It’s easy for us in Piedmont to say this will never happen here … I think we all know that that’s a fallacy,” Roland told the council. “It could happen anywhere.”

Bowers told the council that he and Booker, along with other Piedmont community members, met in March to discuss a public education outreach effort for promoting gun safety. More meetings have taken place since then, Bowers added.

The killings last weekend of 10 people in a Buffalo, N.Y. supermarket by an avowed white supremecist served to drive the point home further that change is needed.

“The timeliness of this is becoming all too common,”  Bowers said.

And during a slide presentation describing the problem and prospective steps to fight it, Roland cited grim national statistics – 150,000 Americans are shot each year, and 40,000 of them die. An average of eight children a day suffer gunshot wounds from firearms in their own homes, he said. And a U.S. citizen is more than 70 times more likely to die in a shooting than is a resident of the United Kingdom.

It’s easy for us in Piedmont to say this will never happen here. I think we all know that that’s a fallacy.

And gun violence isn’t always one person to another. Of Americans killed by guns, 60 percent of those are suicides, Roland reported. And suicides are more likely to happen in residences where firearms are stored.

To help prevent that, Roland and Bowers both cited the Gun Violence Restraining Order, which can be sought to help keep a person in crisis with access to guns from using them.

One element of this push for gun safety, Booker said, is stressing the safe storage of firearms.

“This is not an initiative to take people’s guns away … it is educating our community about how we handle guns, how we safely store them, how we talk about them,” Booker told the council. The goal, he added, is a “change in culture” surrounding firearms.

The state Penal Code addresses proper firearm storage. City Attorney Michelle Kenyon said some other cities she works with have explored going further than what the state requires, but have been threatened with legal action by the National Rifle Association, though no suits have actually yet been filed, she added. She urged the council to carefully consider how far to go on that issue.

The school district’s first formal communication on this topic was set to go out on an email Monday night, Booker said. The City Council is expected to put on the agenda of an upcoming regular meeting further discussion, which include a formal city response to this issue.

Mayor Teddy Gray King said she wants Piedmont to become a “model city for gun safety,” and asked Roland how that can be achieved. He responded, “If we follow the basic tenets I’ve outlined here and educate people, you will be a model.” He also told the council his group will support the city in whatever outreach they choose to move forward with.

When asked on Wednesday how he would like to see Piedmont’s citizenry respond to this nascent campaign, he responded in an email, “I  would like to see residents of Piedmont embrace the need and importance to increase education in ways which will assure safe practices around guns, through information that will be distributed, and through meetings or trainings that may be offered or sponsored” by the school district, the police department and the city.

IN OTHER CITY NEWS: More money toward EV chargers

City Administrator Sara Lillevand said the extra money is needed because the costs of providing that ADA-compliant parking space for the chargers was not part of what the city had previously approved for the EV charger project in June 2021, at that point on Bonita Avenue. Four months later, in October, the agreement with the nonprofit public agency East Bay Community Energy to install the chargers at that location

EBCE will maintain and operate the EV “fast chargers” for at least 10 years. Though the original terms of that agreement required construction to start by April 30 and for the chargers to be operational by July 1, supply chain issues and back ordered parts mean construction likely won’t start until late this year, Lillevand said.

Individual private users of the chargers’ electricity will pay EBCE for the power.