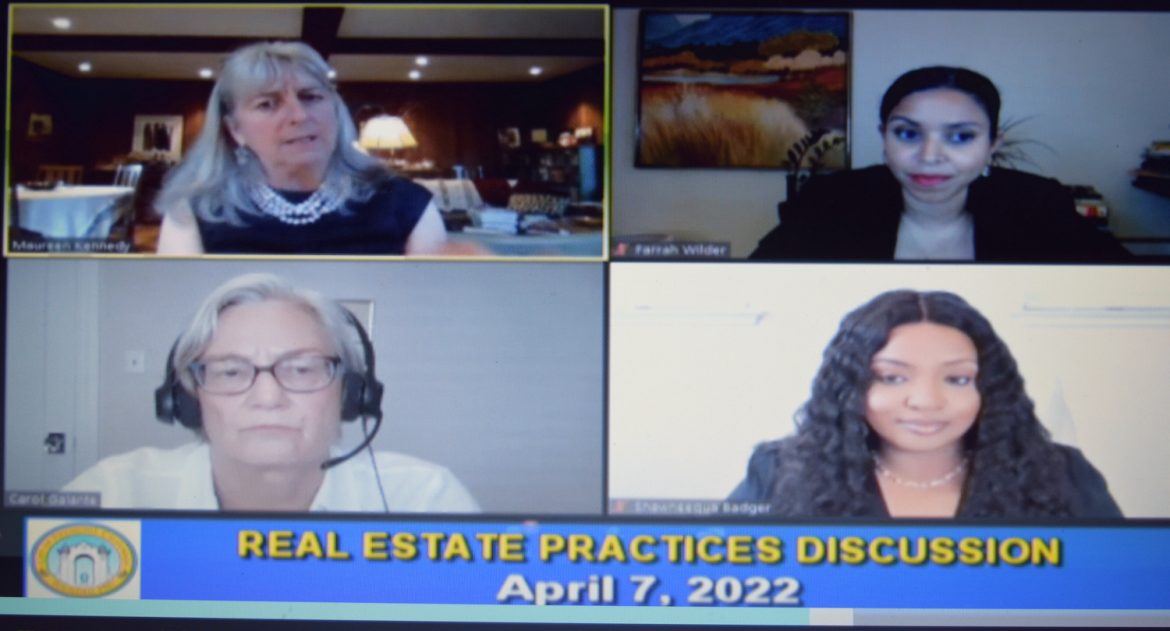 In 2022, a community’s diversity is usually a selling point when a home is on the market, several real estate experts said at a recent Piedmont program about “Real Estate Practices in Support of an Inclusive Community.”

But even today, they also said, ingrained prejudicial attitudes from years past are still hampering efforts in Piedmont and beyond to become more inclusionary communities.

“You can change laws, but you can’t necessarily change hearts and minds and priorities all at the same time, and we’re still working on the fair housing issues,” said Carol Galante, founder of the Terner Center for Housing Innovation at UC Berkeley and HUD’s deputy assistant secretary for multifamily housing during the Obama administration. She moderated this 90-minute panel discussion on April 7 that covered ground from Piedmont’s racially restrictive past to a much more positive, if still flawed, present-day community making strides in overcoming its past and embracing diversity.

The panelists said the inequality of homeownership in the United States was the biggest factor in “creating a huge racial wealth gap,” Galante said. And Piedmont, in the first half of the 20th century, played its part and more in making that situation worse; in addition to the now well-publicized story of the Dearing family, Piedmont’s first Black homeowners driven from the city in the 1920s, the practices of “redlining” (denying home financing to people based on race or ethnicity) and “blockbusting” (getting homeowners to sell cheaply by creating fear of people of another race or class moving into that neighborhood) were alive and well in Piedmont, as were deed restrictions barring certain people from buying homes.

Galante read an old Piedmont zoning restriction: “No saloons, no Chinese, Japanese, Negroes or Filipinos … no poles and wires in the street (a great feature) … “

Even with the passage of the federal Fair Housing Act of 1968 which explicitly banned such lending and deed restrictions, such issues still are at play in Piedmont, panelist Shawneequa Badger said, even if they are more subtle and much less common than a half century ago.

“I’ve shown properties in Piedmont and it’s not so friendly,” said Badger, a realtor and also a “Realtist” who pledges to adhere to the principle that all citizens have the right to equal housing opportunities, regardless of race, creed,or color. There have been times in Piedmont when she, a prospective homebuyer or both of them felt “iced out.”

“It’s something you feel,” Badger said.

Farrah Wilder, chief diversity, equity and inclusion officer for the California Association of Realtors and a former Realtor in the Oakland-Piedmont area, said East Bay Realtors have at times worked to keep Piedmont “racially restricted.”

Though changes in the law didn’t bring about immediate changes in attitude among homesellers, Wilder and others said Piedmont has begun taking steps needed to bring about a meaningful turnaround in housing inclusion. They praised the efforts of the Piedmont Anti-Racism and Diversity Committee and the Piedmont Racial Equity Campaign — two of this presentation’s sponsors — as well as the Piedmont City Council’s August 2020 pledge to confront its racist past and take aggressive steps to increase inclusion, including with housing.

Maureen Kennedy, a retired Piedmont real estate agent and onetime Housing and Urban Development deputy assistant for policy in the Clinton administration, said the real estate industry needs to reassess the way properties are presented in promotional materials. Cutting down on wording reflecting “implicit bias” would be a good start; a term like “exclusive community” or including the numeral “8” — considered a lucky number in some Asian cultures — in an asking price are subtle indicators, panelists said. And Galante suggested a universal, inclusion-friendly description of Piedmont in real estate advertising could cut down on implicit bias.

Badger and Wilder both said there should be more diversity in real estate advertising. Ads that don’t explicitly present images of diversity, Wilder said, is a tell that that community doesn’t value inclusion.

Badger said that is the wrong message in 2022.

Diversity, she said, “in itself is a selling point.”

The discussion was also co-sponsored by the City of Piedmont and the League of Women Voters of Piedmont, the Piedmont Anti-Racism and Diversity Committee and the Piedmont Racial Equity Campaign. To watch the full presentation, go to https://piedmont.granicus.com/MediaPlayer.php?view_id=3&clip_id=2511.