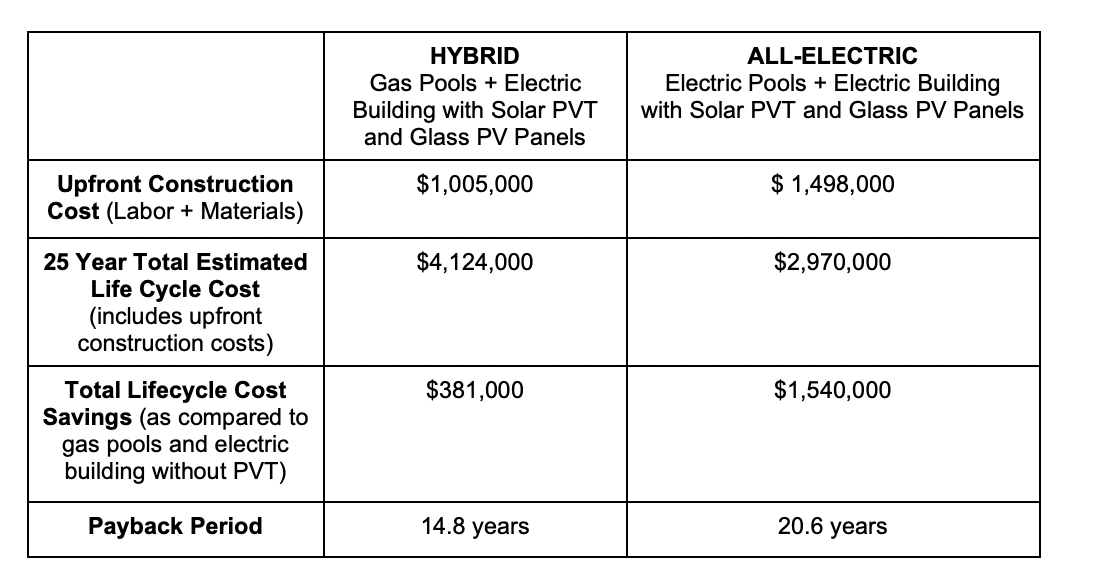 After months of discussion, Piedmont’s city council voted unanimously Monday night to approve plans to heat the new community pool with electricity rather than natural gas. The decision puts Piedmont at the forefront of heating large public swimming pools with electricity. In California, only the city of Mountain View has adopted a similar plan so far, according to City Administrator Sara Lillevand.

Although choosing an all-electric path means some operational uncertainty and higher upfront costs of half a million dollars for the city, council members were in agreement that it was a cost worth bearing if it meant moving the city closer to achieving its goals of reducing greenhouse gases and meeting climate action plan goals.

The $500,000 cost includes 18 heat pump chillers, four heat exchangers, and HVAC-related items that include seismic work and hauling and other building-related HVAC work, according to the city’s staff report. (You can read the full report HERE.) Lillevand said the city will have until the fall — approximately six months — to find the funds.

The impact on operational costs is more difficult to calculate, the city said in its staff report. While the city could see savings of more than $1,150,000 over 25 years as compared to natural gas, “energy prices, including electricity, are more volatile than other commodities and thus very difficult to predict. In addition, the heating of large public pools with electricity is a relatively new application of heat pump technology. Therefore, we do not have any actual operating data related to the maintenance and repair, as well as the anticipated life span, of this equipment in a municipal aquatic setting.”

In response to questions from Councilmembers Jennifer Long and Betsy Andersen about anticipating maintenance or operating pitfalls, Lillevand said that as she has learned more about the technology the more comfortable she has become with its stability. “This is a new application of well-tested technology … people know how to fix and repair these systems.” Consultant Ted Tiffany said heat pump technology — which is used in the chief medical officer’s office in San Francisco and lab buildings at UCSF — is versatile and maintenance is simple.

The city said it expects to partner with East Bay Community Energy (EBCE) for support. EBCE’s CEO, Nick Chaset, told the council Monday evening that EBCE, as the provider of the fuel to the heat pumps, would ensure there would be no direct emissions on site, that the fuel is 100 percent from renewable sources, and that it would work to keep fuel costs as low as possible. He also said EBCE would also help the city apply for state or federal grants that might be available to early adopters of the new technology. (Piedmont is already working with EBCE to bring EV chargers to the city.)

For Piedmont to meet its CAP 2.0 greenhouse gas emission goals adopted in 2018, natural gas use in all homes and buildings in the city will have to be significantly reduced, said Alyssa Dykman, Piedmont’s sustainability program manager, at the March 24 meeting and again Monday night. The city’s now-closed old pool, she said, was by far the single largest CO2 emissions emitter among city-owned facilities, accounting for about 20 percent of such emissions in the entire city (residences account for the lion’s share).

“There’s a lot of momentum toward electrification,” Lillevand says. “We have an opportunity to either increase or decrease the amount of natural gas we put out into the community. We need to take the opportunity to reduce rather than increase our carbon footprint,” she said.

Ultimately though, in order for Piedmont to make meaningful progress toward meeting our CAP 2.0 goals, the broader community, including all residents of Piedmont, will need to make significant reductions in natural gas use in their homes, vehicles, and daily lives.

“This is a decision that has some risk … but I hope that in making this decision to go all-electric we will inspire residents to make the same decisions when it comes time to replace a water heater, home furnace, purchase a new car. We can’t do it alone.” said Councilmember Betsy Andersen.

“There is some uncertainty, but [staff and consultant] expertise has helped us gain some clarity and confidence in this approach,” said Councilmember Jennifer Cavenaugh. “The next step is important for our credibility. We can’t ask residents to take actions on behalf of the climate if we as a city aren’t willing to do the same. We need to do right by our kids and community members.”

“This is a real opportunity for Piedmont to be a leader,” said Councilmember Conna McCarthy. “What seemed impossible in 2016 when the master plan for the community pool was being drawn up, is suddenly possible … the technology and experience we will get will benefit others.”

“I want to thank the community for a high level of participation. I appreciate people taking the opportunity to express their perspectives,” said Councilmember Long. The Council has received over 50 emails in the last two weeks alone from students, community members, and the League of Women Voters in support of an all-electric option.

“To get to this point has been a substantial journey. Reaching back to 2009 — we talked about reducing pool emissions. I am grateful there are so many folks who have been passionate about doing what we can to protect the environment and planet for future generations,” said Mayor Teddy Gray King, who also called out former Councilmember Tim Rood’s longtime commitment to the city’s environmental goals. “We are blessed to live in a community that is supportive of us taking bold action.”