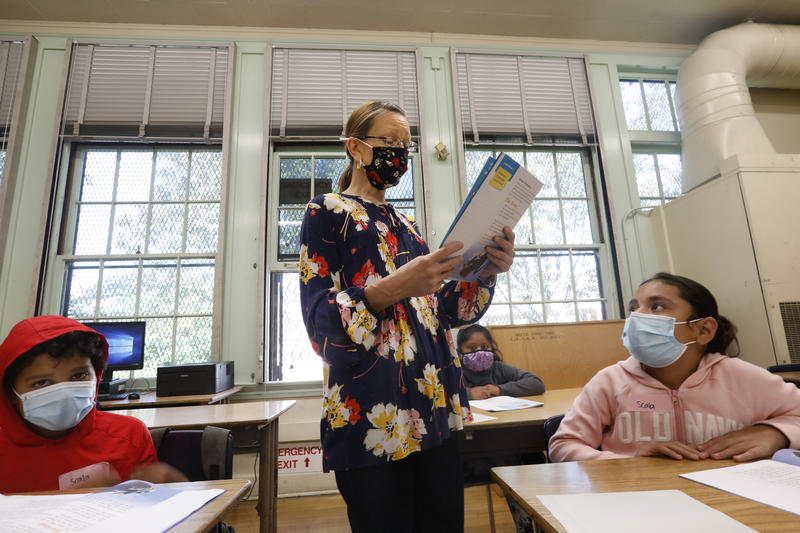 Some California school district superintendents, especially those in rural areas of the state, fear that teachers and other staff members will quit rather than be vaccinated or take weekly Covid tests — a state requirement that began Friday.

Many California districts are already struggling to staff schools, and even a moderate number of resignations would mean not only fewer teachers but fewer bus drivers, instructional aides and substitute teachers to keep schools running.

Tim Taylor, executive director of the Small School Districts’ Association, said superintendents have told him some of their employees have threatened to quit their jobs because of the mandates.

“There are employees that will refuse to take the test and the vaccination, which puts the school district in a situation where they would lose employees who would rather not give up their personal beliefs or who don’t trust the government,” he said.

The Covid requirements will become even stricter this summer. Earlier this month, Gov. Gavin Newsom announced that all public and private school students and employees must be vaccinated by July to be on campuses. They will no longer be able to be tested as an alternative to a vaccine unless they are eligible for medical or personal belief exemptions.

Opinions about the mandates vary greatly and largely depend on the politics of the school community. School districts in more conservative areas of the state report more resistance to testing and vaccines than communities with more liberal residents.

“This conversation is playing out very differently depending what community you are in,” said Edgar Zazueta of the Association of California School Administrators during his weekly legislative update last week.

Superintendents in some districts are concerned about the potential for declining enrollment and increased staffing shortages because of the vaccine mandates, Zazueta said. On the flip side, he said the state mandate gives school districts like Los Angeles Unified that have instituted local vaccination mandates some cover in terms of defending themselves against legal challenges.

In Modoc Joint Unified School District in Alturas, 31 teachers and other school staff are considering resigning because they don’t want to take the Covid test or get vaccinated, Taylor said.

In a small district like Modoc Joint Unified, which has 857 students, a loss of nearly half its employees could force it to close, Taylor said.

“We have never gotten to these crossroads,” Taylor said. “What if you can’t staff your schools? I don’t know what the answer is.”

Schools in many rural areas already have been struggling with staffing shortages, which have been exacerbated this school year by high Covid infection rates and mandated quarantines, leaving classrooms without teachers.

Although there is more resistance to the mandates at rural schools, even the state’s largest district — Los Angeles Unified — is struggling to get its staff vaccinated. The district, which passed its own vaccine mandate for staff and students in September, recently moved its deadline for all staff to be fully vaccinated from Oct. 15 to Nov. 15.

At a school board meeting on Sept. 28, district officials announced that only 1 in 5 employees had turned in proof of vaccination, according to the Los Angeles Times. The district is trying to encourage vaccinations by hosting vaccine clinics on campuses, allowing staff up to three hours of paid time off to be vaccinated and hosting informational meetings for employees.

Interim Superintendent Megan Reilly has said vaccines are the best way to keep kids in school.

“Vaccines are a game-changer for all of us,” she said in August. “They help reduce the chances of getting considerably sick and dying from the virus. We can and will protect our school communities by continuing to vaccinate employees and every eligible student.”

The state mandate is set to begin either Jan. 1 or July 1, depending on when the U.S. Food and Drug Administration fully approves the shot for children in each grade span — seven-12 and K-six. Only the Pfizer vaccine is fully approved for those 16 and older. The Pfizer vaccine also has emergency authorization for use in children ages 12 to 16.

Sacramento City Unified Superintendent Jorge Aguilar called the district’s vaccine mandate “a bold stand to protect public health,” but warned the school board Tuesday that the requirement could increase staffing shortages in the district as students who don’t want to be vaccinated move to independent study.

“Our independent study program is already challenged under our current circumstances,” he said in a statement. “A statewide staffing shortage has been exacerbated by the pandemic, and Sac City Unified, like most districts across the state, has been struggling to fill positions, so we can meet current demand for independent study.”

The school board voted to require all eligible students and staff to show proof of vaccination, either first or second dose, by Nov. 30.

In San Diego Unified, school staff members have until Dec. 20 to receive both doses of the vaccine. That gives them two weeks over the winter break to achieve full immunity, said Andrew Sharp, spokesman for the district.

Sharp said it’s too early to know if the state vaccine mandate will affect staffing levels at the district. Currently, the district requires that staff either be vaccinated or tested for Covid-19. The human resources department hasn’t seen an exodus of staff as a result, he said.

District vaccine mandates aren’t likely in rural districts, where more community residents are opposed to vaccines. Staffing shortages are already severe in some of those districts, and school officials worry about filling positions if more employees leave.

Sherri Morgan, executive director at Long Valley Charter School in the small, conservative town of Doyle in Lassen County, said it’s difficult to find employees even in the best of times.

“Do you know where Doyle is?” she asked. “There is nothing for 40 miles north of Reno. It’s literally in the middle of nowhere.”

Every member of the Long Valley Charter School staff has indicated a willingness to take the Covid test, Morgan said. But she is nervous about what will happen when the option to test is taken away and the vaccine is mandated.

“In January, if they say they have to be vaccinated, I don’t know how I will stay open,” she said.

The district, which serves 230 students, already has counselors and other credentialed employees in classrooms filling in for teachers every day of the week, she said.

Morgan is particularly worried about what will happen if state legislators remove the option for personal exemptions.

“I’m not joking with you on this,” Morgan said. “I have thought about bringing in candidates from out of the country. I was close when Covid restrictions first happened.”

Lynn Pennock, an employee at Temecula Valley Unified School District in Riverside County, expressed her displeasure with the governor’s most recent vaccine mandate at a school board meeting on Oct. 5.

“I’m totally happy to take the test, preferably the spit test. I don’t want something up my nose,” said Pennock, who said she has never had Covid, although three people in her family have contracted the virus. “I will take it every week without taking that vaccine. I don’t feel I need to take the vaccine. So you know what it is honestly, it’s extortion. It’s not a choice anymore. You are mandating something and that’s extortion.”

At Clovis Unified, a district of nearly 43,000 students in Fresno County, opposition to Covid safety protocols has been heated.

Barry Jager, associate superintendent of human resources and employee relations at Clovis Unified, said the district is trying to accommodate staff who are hesitant to take the mandated Covid test by offering both the nasal swab and the less invasive saliva test.

The district has a shortage of instructional aides, bus drivers and substitute teachers, he said. Bus mechanics and district transportation managers are doubling as bus drivers, and human resources staff struggle to hire enough substitutes.

He expects the mandates — especially the vaccine mandate next year — will make it difficult to keep staff.

Konocti Unified School District officials struggle every year to find enough teachers and other staff for their schools. Assistant Superintendent Chris Schoeneman is certain the vaccine mandates will make staff shortages even worse in the district, which serves more than 3,700 students in rural Lake County.

Schoeneman supports the vaccine mandate but understands that not everyone shares his beliefs.

“I do see us losing good people who just believe strongly that they should never be mandated by the government on something like this,” he said. “Their reasons may be political, health-related, religious, etc., so there is a lot to consider for folks and be respectful about. … But bottom line is it looks like you will need to be vaccinated if you want to work in education in California.”