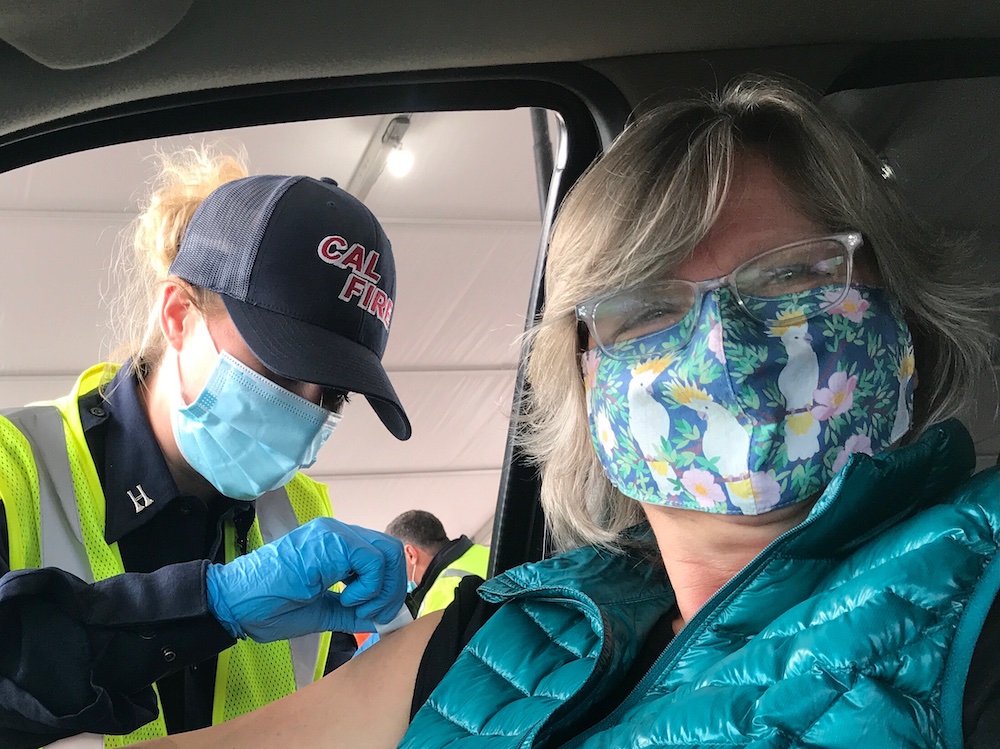 Jana Branisa, PHS Technology Coordinator, was one of the first teachers to get her vaccine in Feb. 2021

In a 4-1 vote on Wednesday night, the Board of Education approved a resolution requiring all PUSD staff, contractors, and consultants to provide proof of vaccination by Thursday, Dec. 9, 2021. The resolution also includes district volunteers and all visitors to campuses. Medical exemptions will be considered but personal exemptions will not.

The vote was not straightforward. An earlier draft of the resolution brought before the board included a personal exemption clause — language that the superintendent said was consistent with federal and California guidelines. Nevertheless, Trustee Amal Smith, citing an Oct. 12 LA Times editorial (“A gaping hole in Gov. Newsom’s vaccine mandate”), said she could not support the resolution unless that language was removed. Referencing the editorial, Trustee Hilary Cooper called personal exemption clauses “an unlimited hall pass”.* Other trustees agreed, noting that it was inconsistent to have a student vaccine mandate in place that did not allow for personal exemptions and a staff policy that did.

On Sept. 22 PUSD was one of the first districts in the state to approve a student vaccine requirement. All families of age-eligible students (currently 12 and above) are required to provide proof of vaccination status or medical exemption no later than Wednesday, Nov. 17, 2021. Students who will turn 12 during the current school year will have eight weeks to administer both COVID vaccination doses to meet the requirement.

In a summary of the board meeting, PUSD notes that Governor Newsom announced on Oct. 1 that “the COVID-19 vaccination will be added to California’s list of required vaccinations for K-12 student enrollment following full FDA approval. As there is no definitive timetable for when the FDA will approve the COVID vaccine for students of all grade levels (currently approved for ages 16+), the state’s policy encourages school districts to continue moving forward with their own vaccine requirements.”

Trustee Veronica Thigpen, who voted against the measure, said that while she did not believe in personal exemptions herself, she did not want PUSD to pursue a policy that was not aligned with existing California guidelines. “I don’t believe there should be a personal belief exemption but I think it is important that we do things that are legally defensible and follow state law,” she said.

“I would like to move us forward,” said Board President Cory Smegal. She said there is simplicity in having students and everyone else following the same rules.

Earlier in the meeting, APT President Flint Christensen told the board that APT did not oppose a staff vaccine mandate, although that comment was made before the board struck the personal exemption clause from the resolution.

(An earlier version of this article incorrectly attributed the “unlimited hall pass” quote to Smith when Cooper was the trustee who mentioned it.)