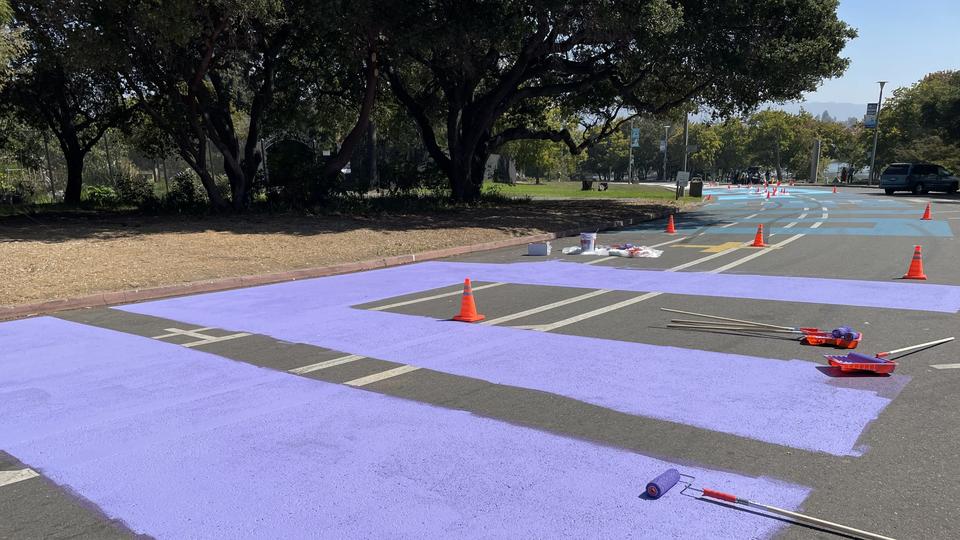 East Bay Queer Arts Center founder Kin Folkz asked for everyone present at Sunday’s Pride Paint Mural Party at Lake Merritt to text them their names for inclusion in an ongoing living document — a list of people who have contributed to the mural. “Your energy is in this,” Folkz said. “It’s important to honor everyone’s energy in the space.” (J.L. Odom/Bay City News)

Over the holiday weekend, the temperature was high and the air quality subpar, but the party went on — specifically, the Pride Mural Paint Party — at Oakland’s Lake Merritt. On Sunday, participants grabbed paint rollers, dipped them in trays of white, blue and purple paint and got to work refreshing what has become a key fixture in the city: the mural that reads, “All Black Trans + Queer + Nonbinary + Women’s + Disabled + Imprisoned Lives Matter.”

“This is our live-out-loud creative experience,” explained Oakland native Tory Teasley. “It’s something that marks the stamp on what this city is truly about. It represents its communities, the diversity of people here.”

In 2020, the expansive mural was conceptualized by local artivists, including Kin Folkz, founder of the East Bay Queer Arts Center on Lakeshore Avenue in Oakland. In June of the same year, more than 300 volunteers participated in its installation. The piece on the surface of Bellevue Avenue, which wraps around The Gardens at Lake Merritt, has seen its share of traffic ever since.

The paint party on Sunday was a means to return the mural to its original state of vibrancy. The open-to-all event involved a refreshing of the bright, bold colors of Oakland’s inclusivity-focused message. It is no coincidence that the new paint job is taking place in September, Oakland’s official Pride Month.

“You know the party doesn’t start until we show up,” Folkz said jovially.

They then honed in on the significance of the people, occurrences and spaces that have played a key role in BIPOC + LGBTQIA visibility, such as the Oakland Pride Parade and Festival, which has been canceled this year because of COVID-19 concerns. In its place, a digital Oakland Pride celebration is scheduled for this upcoming Sunday.

On Saturday, “Earl Gay: An Outdoor Celebration of QTPOC Magic” — a queer tea party and fundraiser for the Queer Arts Center with journaling, crown-making, a sound circle and music from singer-songwriter Be Steadwell — takes place from noon to 9 p.m. The location, 25 minutes from downtown Oakland, will only be shared with ticket holders, and proof of vaccination or a negative COVID test within 72 hours of the event is required. Find tickets, $20-$50, at www.queerartscenter.com.

“We also know that [Pride] didn’t start off as a party,” Folkz said. “It started out with a protest. It started off with those above us who were being rendered as invisible, silenced and traumatized. Our ancestors stood up for us. So we honor them during Pride by doing the work.”

In addition to recognizing the value of those involved in equality, equity and justice efforts and locations ripe with cultural history such as Lake Merritt, Pride Mural Paint Party attendees called attention to the ongoing challenges that marginalized communities and individuals encounter on a daily basis. Such difficulties are why the mural continues to have relevance.

Queer Arts Center waacking ambassador David Xone Johnson said, “I’ll be transparent: It’s still extremely challenging. So we’re coming together to acknowledge that and just take everything that we are dealing with collectively into one statement to say that we are here and matter.”

Others reiterated the importance of the mural’s message. Janetta Johnson, executive director of the TGI (Transgender, Gender Variant, Intersex) Justice Project, spoke of the need for incarcerated transgender individuals to have a community and resources in place when they are released from prison, as well as housing opportunities.

At Sunday’s event, Oakland City Council president and District 2 representative Nikki Fortunato Bas spoke of her allyship and about her and fellow councilmembers’ dedication to the BIPOC and LGBTQIA communities.

“We are dedicating our lives to people who have been marginalized, who have been silenced. We are working to make your voices heard.” Of the mural, she said, “This is the type of Oakland I am working to build.”

Those in attendance on Sunday also recognized the mural is for future generations, who will have their own experiences and impact on society.

A volunteer, Nereida Moussa from San Jose, repainted the mural alongside her child. “As a mom to a gender expansive child who is a person of color, it’s really important for me to teach my kiddo to highlight that Black lives matter, that all marginalized lives matter,” Moussa said.

The early morning transitioned to late morning, the temperature rose and the sun shone down on Bellevue Avenue. The party continued, paint rods in hands, rollers moving up and down the mural’s prominent letters.

As Bas said, “The antidote to being silent, to being oppressed, to being traumatized, is painting this beautiful mural that makes the LGBTQIA community visible, especially the BIPOC members of the community.”

The solidarity statement associated with the mural can be found HERE.

Learn more about how you can help the East Bay Queer Arts Center and volunteer for its upcoming mural parties on its website, queerartscenter.com, and its Instagram page.