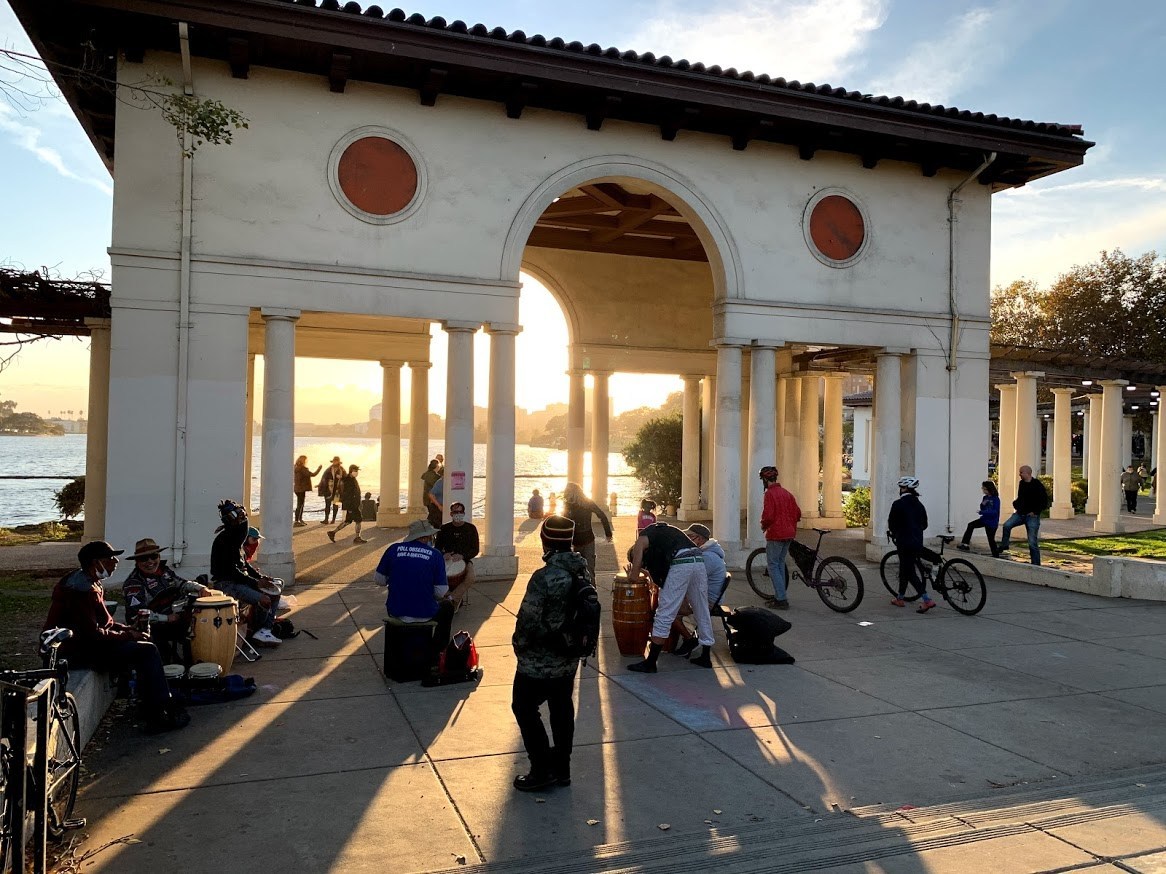 At Lake Merritt’s pergola, musicians create a drum circle while others dance, walk nearby, or simply take in the view. The lake has been an invaluable resource for Oaklanders throughout 2020. (Photo by J.L. Odom)

When Dr. Samuel Merritt generously donated 155 acres of land for public use in the late-1800s (www.oaklandca.gov), he could not have anticipated the important role his “donation” would play, especially in the current year.

With most public indoor facilities still closed due to COVID-19, coupled with shelter-in-place orders, Lake Merritt has become a sought-after destination for those seeking to stay active and involved in the community.

“Lake Merritt has a long history and a palpable energy. You can feel it. If you’re near it, if you live here, you know. It pulls us in, draws us to it. It’s in the soil,” said Kin Folkz, co-founder of the East Bay Queer Arts Center and creator of Oakland’s Pride Run, Ball + Wellness Expo.

On any given day, runners, walkers, and cyclists, along with the occasional roller blader, horseback rider, and person on stilts, circumnavigate Lake Merritt’s 3.4-mile perimeter.

Fitness groups, musicians and dancers congregate at the pergola. Residents flock to food trucks for açaí bowls and BBQ. The lawns fill with people, blankets and chairs. Vendors set up shop under canopy tents, splaying their merchandise on tables and racks. And in the evenings, particularly when the weather is inviting, a party-like atmosphere thrives on the east side near the Cleveland Cascade.

“I am really glad that Oakland has the lake. It’s a great place for people to get a short run in without worries about cars. It’s also a nice place for families to come together. I really appreciate the way that the lake brings the community together,” said Jennifer Stringham, a therapist who lives in the Adams Point neighborhood. Stringham has been going to Lake Merritt for runs and to socialize her dog.

Throughout the coronavirus pandemic, Lake Merritt has been a hub for social justice pursuits as well. Meeting at locations such as Fairyland and the amphitheater, hundreds of people have walked in solidarity, chanting and holding signs in support of equity and inclusivity.

Lake Merritt “art-in-action” installations in particular have contributed to giving a platform to important societal issues and acknowledging those who are marginalized.

“This work is necessary — it invokes a public conversation,” Folkz said in an interview. “People can have the equity conversation through art. It allows them to reflect on how people are actually experiencing their lives under oppression.”

Folkz oversaw the “Ride 4 Justice” held in June, which focused on seeking justice for Black transgender lives and on the celebration of LGBTQIA+ individuals. This art-in-action event involved a peaceful, 300-plus-car caravan that circled Lake Merritt for more than five hours.

“I specifically chose Lake Merritt mostly because of my connection to its Indigenous significance — I’m Black and Choctaw,” Folkz said.

They described Bellevue Avenue as a designated “artist zone,” established by former Mayor Jean Quan, which alleviated their initial concern about the installation being so-called “renegade art.” And because the city was not permitting vehicles on Bellevue as a part of the “safe streets” program at the time, it made the installation easier for the many involved.

“Over 400 people contributed to the creation of the mural, making it truly public art,” Folkz said. “Individuals were able to take a paint roller and work on a section and then were able to say, ‘Hey, I did that. I painted that.’”

One standout group, Fit4Good, combines exercise and litter removal: On a monthly basis, volunteers meet at Grand Avenue’s MudLab (a zero-waste cafe and grocery store) for a casual run that involves frequent stops around Lake Merritt for trash pickup.

Vanessa Pope, Fit4Good’s founder and organizer, said, “The litter we retrieve is mostly food trash from restaurants/picnics, cigarette butts and packaging and lots of alcohol bottles/cups, and some other random things, such as clothes.”

Pope appreciates that the litter cleanup also offers the opportunity to get to know neighbors.

Fit4Good held a contest this year in which businesses and individuals competed to keep their designated “adopted” section of Lake Merritt the cleanest. It resulted in the successful pickup of more than 400 bags of trash from Lake Merritt and neighboring parks, and Pope plans to hold this contest on an annual basis. Volunteer efforts like Pope’s clearly have a positive impact on the health of the lake and its wildlife.

Lake Merritt itself achieved a special status this year by reaching the 150-year mark as a wildlife refuge. In celebration of this anniversary, lake supporters produced a documentary that conveys appreciation for those who care for the lake and work toward its preservation. The video highlights Lake Merritt’s long-standing existence as a nature preserve, its housing of more than 100 species of birds, and the ongoing need to look after it.

Among local people featured in the documentary is Oakland Mayor Libby Schaaf, who comments, “The lake has always been this ‘drawing force’ that brings people together to peacefully protest, to dream together of a better world and future. …

“When you sit on the side of the lake, you see Oakland walk by. Everyone — every language, every kind of person, every makeup of what we believe is a family — they’re here, at the lake, and it’s a place that welcomes everyone.”

Lake Merritt will certainly continue to exist as a welcoming public resource in the remaining weeks of 2020 and in the years to follow.

And when it thrives, the Oakland community benefits.