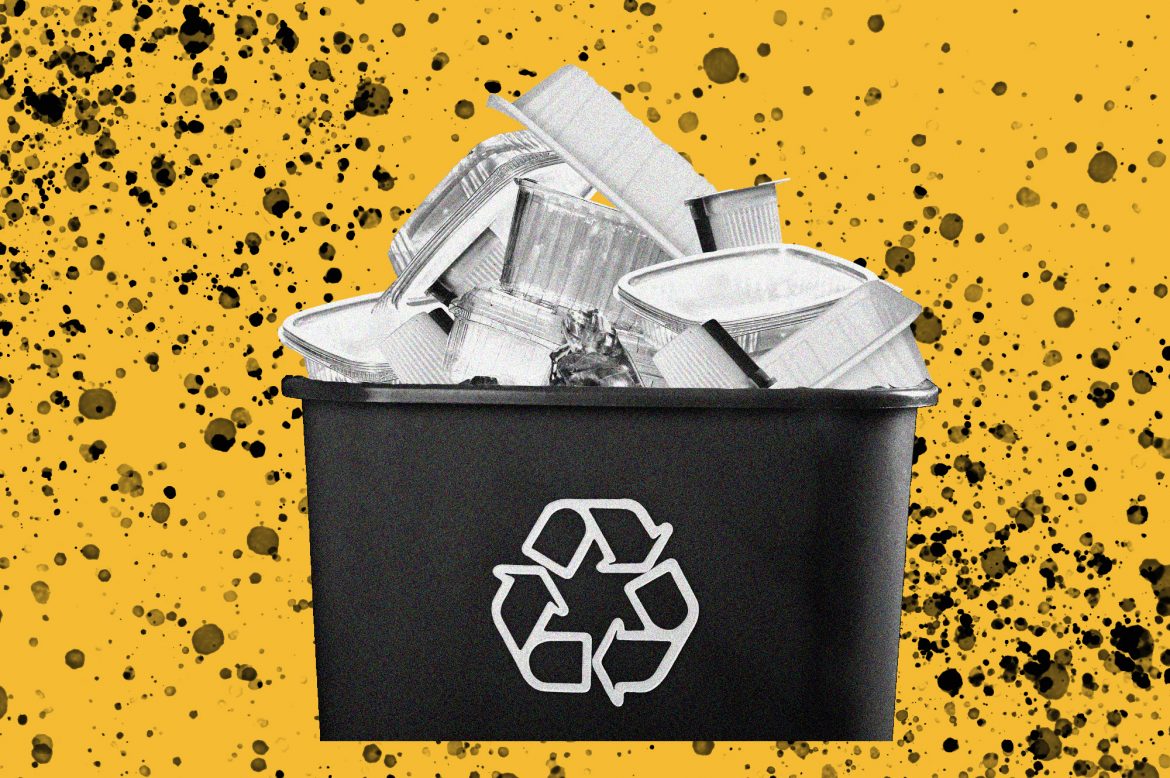 Every morning, when state Sen. Ben Allen would grab the newspaper from outside his Santa Monica home, he’d pull off the plastic sleeve bearing the triangular recycling symbol and throw it where he thought it belonged: in a blue recycling bin.

But Allen soon learned that he was “wishcycling”— carefully sorting items with the recycling symbol, only to discover they weren’t getting recycled.

“It is technically recyclable under the best of conditions at 1,000 degrees in some lab in San Marino. But… they’re not recycled in the real world,” the Democrat said at an Assembly Natural Resources committee hearing in June.

This scenario isn’t unique. Despite the best intentions of Californians who diligently try to recycle yogurt cups, berry containers and other packaging, it turns out that at least 85% of single-use plastics in the state do not actually get recycled. Instead, they wind up in the landfill.

This confusion inspired Allen to pen a bill that buckles down on what kinds of plastic packaging can tout the triangular symbol known as “chasing arrows.”

“If you’re not allowed to call an item recyclable because of our truth in environmental advertising laws, then you shouldn’t be able to put the ‘chasing arrows’ symbol on your product,” Allen said in an interview.

Allen’s legislation is part of a bigger 12-bill package targeted at reducing plastics and waste that lawmakers are considering this year.

Supporters believe it will make what is — and isn’t — commonly recyclable more understandable to Californians. Opponents in the plastic industry believe the bill could pile waste in the landfill and raise packaging costs.

So far, the bill has advanced smoothly with support from the Legislature’s majority Democrats. But many other plastic reduction bills have failed in recent years in the face of industry opposition. Allen’s past attempts at sweeping legislation that would ban non-recyclable plastic packaging died, even as environmentalists — and a superstar surfer — urged its passage.

Amidst these repeated legislative failures at the Capitol, environmentalists have pushed a plastic-recycling initiative that is eligible for the November 2022 statewide ballot. It would levy a new one-cent tax on producers of single-use plastic, and require single-use plastic packaging, containers, and utensils to be reusable, recyclable or compostable by 2030. The tax money would buoy recycling and environmental programs. The logic is: If you produce plastic items, you need to give back to the environment somehow, too, due to the damage plastic causes — from bags floating in oceans to microplastics lurking in food and water.

Allen’s bill now moving through the Legislature is a much narrower, less ambitious way to tackle the recycling dilemma. Instead of a massive economic overhaul, it sets up boundaries on what “recyclable” means — starting with the labels consumers see on everyday items.

It targets the number framed within the triangular arrows symbol — the resin identification code that ranges from 1 to 7 depending on the type of plastic. Only those with a 1 or 2 (plastic bottles and jugs) are widely recycled in the U.S. Whether items coded 3 through 7 actually get recycled depends on local waste management practices. Though some cities, including Sacramento and San Francisco, do recycle items coded 3 to 7, the bill would at first let only products with codes 1 and 2 (such as soda bottles and milk jugs) bear the chasing arrows symbol. It would be eliminated from yogurt cups, take-out containers and lots of other plastics.

That’s a problem for the plastic industry because it would make packaging in California different from what’s required in many other states.

It “would force companies to be out of compliance with other state laws… mandating there be California-only packaging products,” said Lauren Aguilar, who represents the Flexible Packaging Association of industry manufacturers and suppliers and AMERIPEN, which includes companies such as Campbell’s, McDonald’s, and Kellogg’s.

During the hearing in June, Assemblymember Kelly Seyarto pointed out that if California moves forward with a different policy than other states, it would come at a price. California-specific packaging could be expensive, exacerbating the Golden State’s already high cost of living.

“That cost is borne especially by communities that are predominantly poor, and therefore don’t really have the resources to keep spending more and more and more on their food supplies,” the Republican from Murrieta said.

But communities are already paying the price, environmentalists argue. Local garbage collection rates are escalating because non-recyclables and recyclables are mixed together in the blue bins, requiring more sifting and sorting at recycling plants and slowing down the process.

Allen learned his newspaper sleeve with the triangular symbol was causing the same problem. “I thought, oh, this is recyclable — but actually I was making the situation worse while trying to do the right thing,” he said.

In response to complaints from the plastic industry, Allen changed the bill to give companies an additional 15 months to comply and lobby other states to follow California’s approach.

That delay, however, isn’t enough to get the plastic industry’s support.

“Although unintended, (the bill) will result in less recycling and more materials going to landfill,” Plastics Industry Association lobbyist Shannon Crawford said in her testimony.

Democratic Assemblymember Cristina Garcia of Bell Gardens rebutted the argument, saying “most of this stuff is already being landfilled or being burned or being shipped out, and we’re pretending we’re recycling out there.”

The bill lets CalRecycle decide which materials are “recyclable” and can carry the triangular symbol. It allows plastic producers to try to prove their materials are recyclable so they can get added to the approved list.

“What is recyclable is not static,” said Nick Lapis, a lobbyist for environmental advocacy group Californians Against Waste.

Another option — not included in the bill, but on one environmentalist’s wishlist: Put a label that says “trash can” on everything that’s not really recycled.

“That would be very clear to the public, and they wouldn’t put it in the recycling bin,” said Heidi Sanborn, executive director at the National Stewardship Action Council.

The bill will face its final votes when lawmakers reconvene after their summer break on Aug. 16.