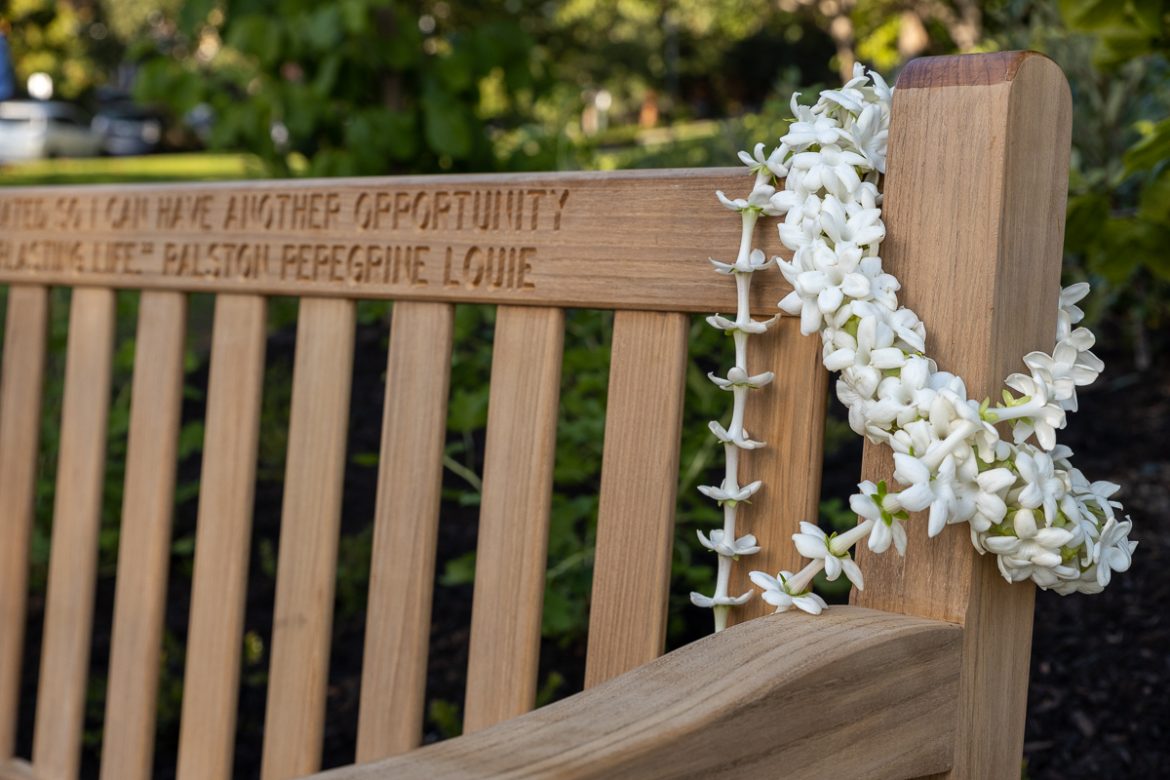 Leis on the bench dedicated to Ralston Louie

Last Thursday, a large group of family and friends gathered to dedicate a space at Dracena Park in memory of Ralston Louie, the 28-year-old who passed away on January 31, 2021, after a swimming accident. Raised in Piedmont and a beloved member of the community and PHS Class of 2010, Louie’s tragic passing prompted friends and neighbors to come together to donate a bench and a grove of Yulan magnolia trees in his memory. (The gifts were donated through Piedmont Beautification Foundation.)

Donors attended the event organized by the Wu/Louie family. It was an informal celebration on what would have been Louie’s 29th birthday, a fitting day to remember and reflect on the extraordinary young man that he was.

Louie’s mother, Robin Wu, addressed the crowd, talking about how important her son’s community of friends was to him and remembered the many hours they spent playing in Dracena Park, the site chosen for the bench and trees.

Community member Jim Horner, who serves on Park Commission with Wu, talked about the group’s decision that the Arbor Day tree planting be in honor of Louie. According to city Parks and Project Manager Nancy Kent, they chose to plant three Yulan magnolias because they bloom in early winter — around the time of his passing. Cultivated in Chinese Buddhist temple gardens since 600 AD, Yulan magnolias are native to China. Louie, a filmmaker, had been working on a project about his family history there.

Cormac Craigie, a neighbor and friend since childhood, addressed the crowd on behalf of the PHS Class of 2010, talked about Louie’s unique gifts of genuine curiosity and empathy for those around him: “Ralston wielded his power to uplift and befriend and in doing so left a lasting gratitude among his classmates.” [See full text of Craigie’s comments below.]

Craigie, president of the class, helped to organize classmates to raise funds in order to donate the bench which had been inscribed with a quote from a poem Louie wrote when he was younger. It reads:

At the gathering, Louie’s own words rang true and were a reminder of the joy he brought — and that his memory will continue to bring — to the lives of his family and those around him.

This Winter, we’ll be hosting our 10 year high school reunion.

When we meet as a class, we will be gathering with a large part of us missing.

We will be missing our soccer captain, our class Scholar Athlete Award winner, our friend, classmate, teammate and colleague.

We are known by our deeds, and in our class of over 200 students, everyone knew Ralston for his work ethic.

He was a relentless worker, both in the classroom and on the field, leading and setting the standard for success with his example, compelling the rest of us to get better and catch up or just stand back rubbernecking at his incessant motor.

When we shared the news of Ralston’s passing and, later, requested donations for this beautiful piece of park, there was a broad and diverse show of support.

Across our class, people remembered anecdotes of Ralston’s superhuman efforts.

But our class rallying to support this project stems from so much more than just a shared reverence for his work ethic. His lasting impact on our class lies in his curiosity.

Just as he was determined to succeed in the classroom and athletics, he brought an equal determination to understand, to understand the people, communities and societies he encountered.

In a large class, and in a competitive community that puts a premium on achievement, high school pressures can often foster a diminished sense of camaraderie.

Not with Ralston. Nothing is more disarming than an authentic curiosity and an effort to know who you are and where you came from.

Ralston wielded his power to uplift and befriend and in doing so left a lasting gratitude among his classmates.

And it is this lasting impact, our memories of Ralston and his surviving influence on our lives, that made us all motivated contributors to this project.

As we all return to Piedmont later this year for our reunion, and return regularly into the future, this slice of park will give us the space to pause and reflect on the life of our friend.

And though we may never match Ralston’s sheer will and determination, we can all benefit from remembering and emulating his curiosity.