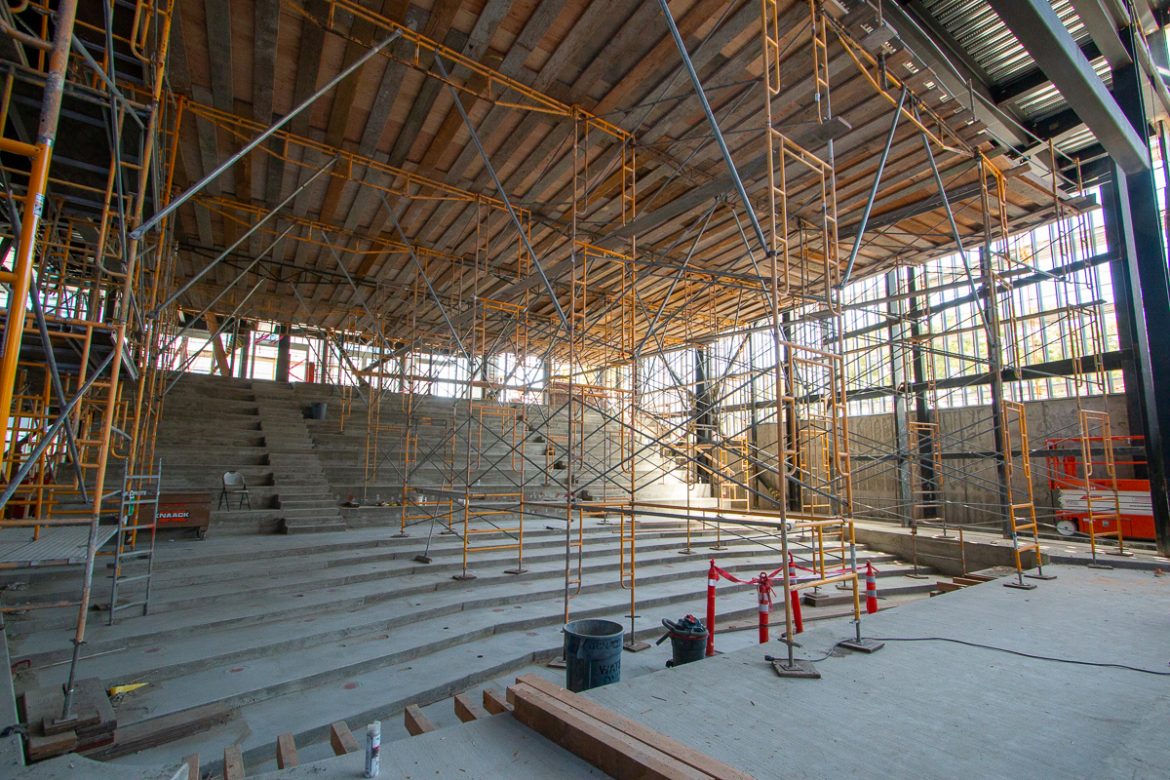 View from the stage into the audience seating area taken in May, 2021.

The Piedmont Education Foundation (PEF) said on Tuesday that it had entered into an agreement with the Piedmont Unified School District (PUSD) to lend the district up to $1.8 million in order to complete the construction of the new Performing Arts Center in 2021 without having to defer or cut features that would impact educational programs. Pandemic-related construction costs and state-mandated additions have exceeded original budget and contingency planning.

To avoid deferring certain features of the arts center project, the PEF Board agreed to guarantee this payment from their endowment fund in March, and it was approved by the PUSD school board on June 23. “Extraordinary challenges call for an extraordinary response. Guaranteeing these payments is in keeping with PEF’s mission,” said PEF Investment Committee Chair Angel Fierro.

The agreement between PEF and PUSD calls for the district to repay any funds for which PEF has provided temporary use. PUSD is working on several avenues to raise funds, including launching a study into the feasibility of a capital campaign and continuing their application for state modernization funds. “We are proud to be in a position, thanks to thousands of families that have donated generously to the PEF Endowment Fund, to help bring the Performing Arts Center to completion for our community,” says PEF Executive Director Heather Frank.

With the help of a fundraising consultant, PUSD and PEF have formed a capital campaign feasibility committee to explore the potential for private fundraising for this and other modernization projects in the school district, a campaign that could potentially reach $16 million if there is community appetite for tackling additional projects such as modernizing other academic buildings, upgrading Witter Field, and more. (PEF’s financing agreement is limited to the $1.8 million required to complete construction on the theater project.)

Piedmont passed measure H1 in 2016 which authorized the sale of $66 million in bonds in order to construct “exceptional teaching facilities” at Piedmont High School. Working with numerous community stakeholders, the PUSD Board of Directors approved a plan to construct a new main high school “S.T.E.A.M.” building and a new performing arts center.

These funds were sufficient to the project at the start of the bond program and had a contingency plan built in to cover unexpected costs. However, the project faced two major setbacks. First, the state imposed supplemental requirements for the project, necessitating millions in additional expenditures for structural steel, concrete, and labor.

Then, in March 2020, amidst already extraordinary market conditions, Piedmont issued a shelter-in-place order. While the construction was allowed to continue as an essential government function, there were significant disruptions in both the labor and supply chains, further increasing projected costs and delaying completion.

In order to combat rising costs, the facilities steering committee (see members HERE) continued value engineering, which entails planning for the substitution of materials and methods with less expensive alternatives without sacrificing functionality. Despite this effort, there was a shortfall attached to the completion of the Performing Arts Center. To complete the project within the original budget, the committee considered deferring certain theatrical fixtures — including installation of the stage floor, rigging, drapes, acoustic paneling, theatrical equipment, carpeting, and flooring — until state modernization funds are paid to the school district. Instead, PEF stepped in to help the District complete the project without these deferrals. Even so, PUSD says COVID-related supply chain disruptions unrelated to funding will delay some items like LED theatrical fixtures and motorized components for the theatrical rigging — no delivery dates have been confirmed.

PEF’s Endowment Fund was established in 1989 to ensure continuous financial support for the schools. Each year, a 5% rolling average is extracted from the fund and included in PEF’s grant to PUSD. The current value of the fund is $9.8 million, up from $7 million in April 2020. The market conditions that led to increased costs for construction were also responsible for a significant increase in PEF’s endowment.

Construction on the Performing Arts Center building is expected to be completed in fall 2021. Updates, including annual reports from the project’s Citizen Oversight Committee, can be found at https://measureh1.org/.

About PEF
Piedmont Education Foundation is a 501(c)3 nonprofit organization whose mission is to provide sustained financial support to the PIedmont Unified School District through fundraising and community engagement. Led by a volunteer board of directors and supported by a professional office staff, PEF oversees the Giving Campaign, Spring Fling, the Student Directory, and much more. PEF recently pledged a gift of $2,750,000 to PUSD for the 2021-2022 school year. Visit PiedmontEdFoundation.org to learn more.