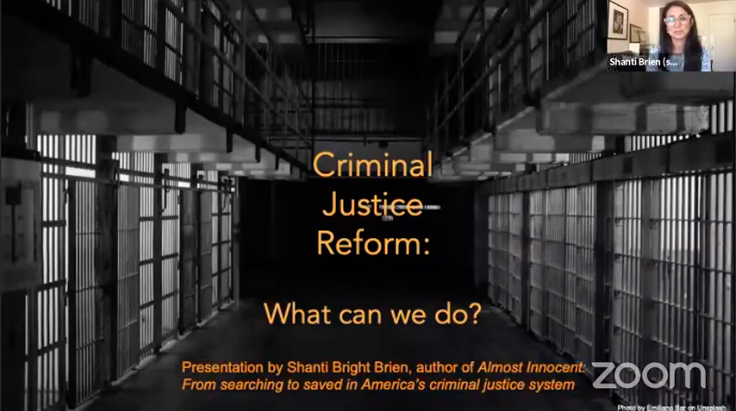 Piedmont resident, attorney, advocate and author Shanti Brien has spent 15 years as a criminal defense appellate lawyer thinking about all the ways America’s criminal justice system has failed. At a (virtual) League of Women’s Voters talk on June 22, she reflected on her experience and read passages from her new memoir to highlight the problems of mandatory sentencing, plea bargains, and unconscious bias in the legal system.

“I see hope and resilience and gratitude and self awareness, but mostly I lose, and my clients lose,” she said, noting that this is the way the system is constructed — convictions are typically upheld for a reason.  “People often write to me from prison on scraps of papers; my clients hope I can create an argument where others have failed.”

Brien advocates for a two-pronged approach to criminal justice system reform. First, make the system “smaller” by decriminalizing drugs, eliminating cash bail, treating mental illness and addiction as a public health versus police issue, and reconsidering sentencing, even for “violent” crimes. She urged listeners to vote for legislation that furthers those aims.

“The war on drugs is still going on,” she said. Sentences are still “insane”, the impact is greatest on people of color, the collateral damage of incarceration is profoundly destructive, and we still too easily dismiss “them” as “bad guys” and “criminals.”

She pointed to the MACRO (Mobile Assistance Community Responders of Oakland)  as a good example of having civilians, not police, respond to mental health calls. Her final suggestion for making the system smaller was to reconsider sentencing even for violent crimes. “We are overinclusive with the category of violence for black and brown people, but underinclusive obviously when it comes to police or aggression toward women,” Brien said.

Second, she says the system must be made more fair, by creating policies to reduce the use of race in convictions, training and education on race and bias, and “discretion-reducing mechanisms” — forcing judges to write down the reasons for their rulings and police officers to write down why they stopped individuals.

Brien suggested listeners vote for policies that reduce the use of race in convictions, like AB-256, the California Racial Justice Act. Brien also argued that people need to be educated on unconscious bias and systemic racism at every level of the criminal justice system.

At a grassroots level, Brien said everyone can examine their own biases themselves when they call the police, vote locally, and increase empathy for those impacted by the criminal justice system.

Over the last eight months, the Piedmont League of Women Voters has posted recordings of many of their presentations on their YouTube channel. You can watch earlier interviews with Alameda County District Attorney Nancy O’Malley, a town hall with Assemblymember Buffy Wicks, and more HERE.

Shanti Brien is an educator, consultant, writer, and co-founder of Fogbreak Justice. She is the author of Almost Innocent: From Searching to Saved in America’s Criminal Justice Systemand an occasional columnist for Piedmont Exedra.

(This article was updated on July 6 to correct some legal language and the spelling of Fetu Faraimo.)