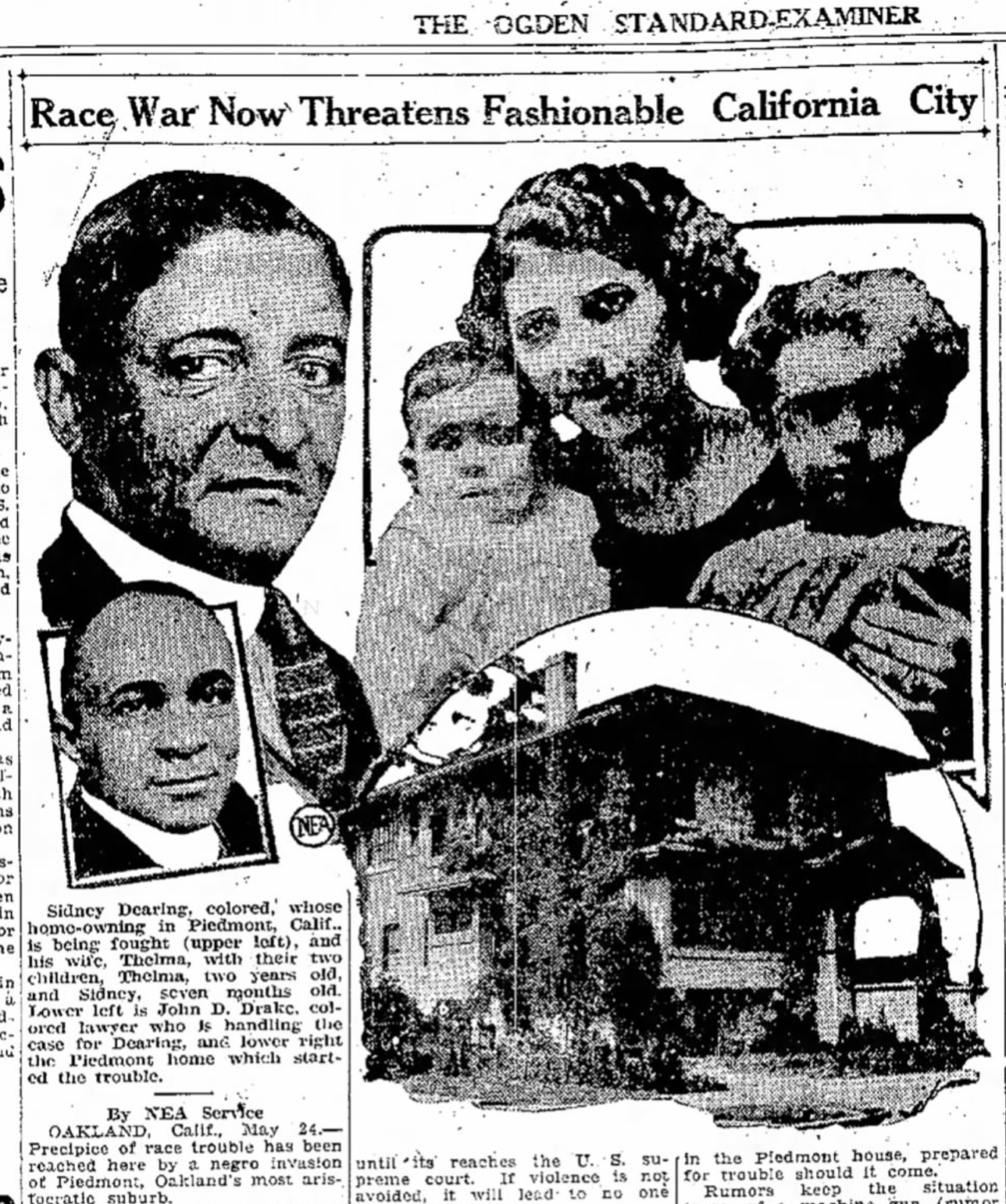 The killing of George Floyd in the summer of 2020 initiated protests, marches, demonstrations and an awakening of social justice throughout the country. Piedmonters of all ages marched through town to show their support for the movement.

At the same time, residents were starting to learn about and reckon with the racist history of our own town. The story of Sidney Dearing was a chapter, long closed, that needed to be opened to the light of day.

Dearing and his wife Irene moved into Piedmont in 1924. They were the first Black homeowners in Piedmont, harassed by residents and city officials, and eventually forced to sell their home and move out of Piedmont.

On September 15, 2020, the Piedmont Exedra published a well-researched article on Dearing by Marta Symkowick and Nick Levinson  On October 21, the high school newspaper, The Piedmont Highlander, published an article on Dearing, the redlining maps of the 1930s and 1940s, and interviews with Police Chief Bowers and residents on racism in Piedmont today. Resident Meghan Bennett’s website www.sidneydearing.com provides photos and newspaper articles documenting the harassment by Piedmonters of Dearing because he was a Black homeowner in Piedmont. City Council member Tim Rood used social media to reflect on and amplify the Dearing story.

And yet, Dearing is not mentioned in the Piedmont Historical Society’s newsletters, articles, and website. Until the actions of the summer of 2020 and the renewed interest in historic racism, I had not heard of Sidney Dearing. When reporters for the Exedra contacted me in June asking for information on Dearing, I gave them my “go-to” resources and then discovered for myself his shocking story. The newspapers.com website allows members to search newspaper articles throughout the country. In California, newspapers from Sacramento to Whittier published articles on Dearing, and the Oakland Tribune provided a wealth of material. Bennett has included these clippings and more on her website.

Once considered a quintessential history of Piedmont, Evelyn Craig Pattiani’s Queen of the Hills makes no mention of Dearing. Pattiani was 47 years old when Dearing was forced out of town. It is likely she knew of Dearing’s eviction. She was 77 when she wrote her book in 1954. As a member of a pioneer family, she told her history with pride and affection for her town. Did she forget about Dearing or did she choose to omit him from her history? Pattiani touched on racism when she described the actions of schoolboys in the 1880s who threw stones at Chinese vendors as they carried baskets of fruits and vegetables from San Francisco to Oakland and the Piedmont hills, but also described how valuable the Chinese were as “servants and cooks”. She later noted the city’s adoption of new ordinances that forbade dwellings of more than one unit, prohibiting apartments and flats.

It is heartening to see positive results as residents and city officials have learned of the city’s past racism and have come together to address racial injustice and move toward a more equitable community.

On August 3, 2020, the Piedmont City Council passed a resolution officially acknowledging the racism of the past and resolved to “review City policies, procedures, ordinances, values, goals and missions through an anti-racism lens” and “committed to fostering a safe, inclusive and civil community.” The City flew the Black Lives Matter flag for the month of August, 2020.

New community groups are also addressing racial justice, each with a different focus. The Piedmont Racial Equity Campaign (PREC) works to raise awareness about racism and supports policies for racial justice and equity. The Piedmont Anti-Racism & Diversity Committee (PADC) promotes and practices inclusiveness, fosters an appreciation of differences, and raises global awareness within Piedmont and surrounding communities. As The Piedmont Highlander reported, the Black Student Union (BSU) was formed to give Black high school students a place to share their experiences and explore the challenges, complexities, and beauty of racial identity.

Piedmont’s historic racism was brought to light last summer. Today’s residents and city officials are taking a more proactive stance against racism and moving toward fostering more equity and diversity throughout the city. By acknowledging and learning from past mistakes, we are writing a better chapter in Piedmont’s history.

As the chair of the city’s historical society, this summer I will add a detailed page on Dearing to the Historical Society’s website. Your comments and feedback are always welcome.

4 thoughts on “Commentary | Sidney Dearing and racism in Piedmont”