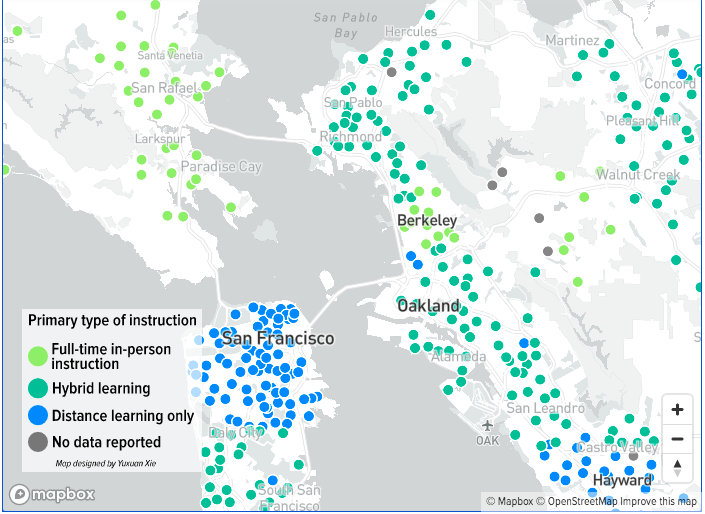 A screenshot of the range of learning modes in Bay Area public schools as of April 30.

In an email to PUSD families on Sunday, Superintendent Randy Booker said that efforts to negotiate more on-campus hours for elementary school students before the end of the 2020-2021 school year failed when APT did not agree to any new proposals. Currently elementary school students in Piedmont attend school in a morning or afternoon half-day cohort four days a week. Parent advocates were hoping for a few more in-person hours on Mondays, which is currently a distance learning day for all students in PUSD. (Update: In response to a parent’s inquiry on May 3 that the Exedra reviewed, Booker said that PUSD presented three proposals: 1.) an additional two hours per cohort on Mondays AND an additional 15 minutes per cohort Tuesday through Friday; 2.) Only Mondays, two hours per cohort; 3.) Only Tuesday through Friday, an additional 15 minutes per cohort.)

Although the school district was the first in Alameda County to bring students back for some in-person instruction, Piedmont students are on campus for fewer hours than many nearby districts. This week, for example, San Rafael city schools in Marin County announced a move to full-day, in-person instruction on May 10 for their TK-8 students, and other districts in Marin are following suit, including adding more hours for high schools. Elementary schools through the tunnel in Lafayette returned for five days of in-person learning on April 12. (From 8:30 a.m-noon for TK-second grade and 8:30 a.m.-12:45 p.m. for third through fifth grade.)

The reopening status of schools in the Bay Area and throughout California remains a patchwork of distance learning, hybrid, and full in-person models. According to an April 30 EdSource learning mode tracking project, only 16% of California students are back for full-time, in-person learning; 31% are in hybrid mode; and 53% remain in distance learning only.

School board met in closed session on Wednesday, May 5

The Board of Education met to evaluate the superintendent’s performance and to discuss the latest round of negotiations on Wednesday at 4 p.m. Although the deliberations were not open, public comment was accepted before the meeting closed. At least six parents called in with specific criticisms of the district and the superintendent’s performance. An email circulating in the parent community from the “Advocates for Full-time In-person Piedmont Schools” group suggested various aspects of Booker’s job performance to critique and encouraged families to share their thoughts with the board by email before or via public comment during the meeting.

School Board President Cory Smegal returned to conclude the session at 7 p.m., saying only that the board had held a “robust” discussion.