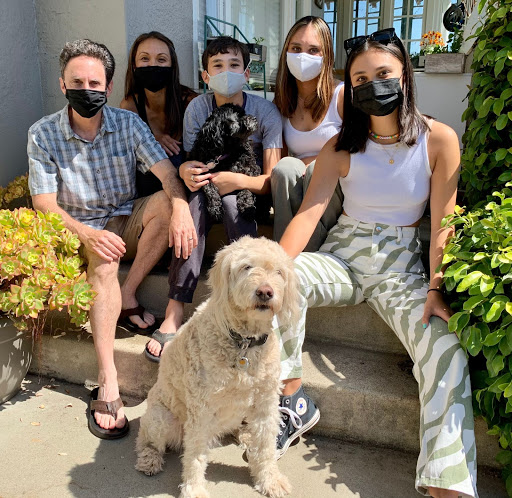 Age: I believe they are both around 8 years old.

Breed: Nilla is a Goldendoodle, Paisley is a mix. Based on the genetic testing others have done of the puppies, we believe she has the most genetics in common with Cocker Spaniels.

Adoption Story: Nilla is a Goldendoodle. We got her at Almond Blossom Doodles. Paisley was another story. Linh wanted to get a dog for her mother as she lives alone in Baypoint. We heard about her from a friend who works at Milo Foundation in Richmond.  After we brought her home, Linh’s mom was unable to take care of Paisley and the kids fell in love with her so we decided to keep her. When we went to get her spayed, we found out she was pregnant. We ended up raising the six puppies until they were about 8 weeks old, placing most of them with Piedmont friends.

Likes: Nilla likes treats, affection, lots of walks, and other canines. Paisley isn’t a fan of other dogs. She is super loyal to her immediate family. She loves eating.

Dislikes: Nilla dislikes most dog food, she’s a big fan of bagels. Paisley doesn’t like when she is not the center of attention.

Interesting Facts: Nilla is very smart. I got lost on a walk in Arnold recently, and when I attempted to walk in the “wrong direction” she sat down and wouldn’t budge. When I finally moved in the other direction she got up and seemed happy and this led to a quick return to the house.

Anything else? Paisley is the mom of last week’s Good Dog feature, Rocco.