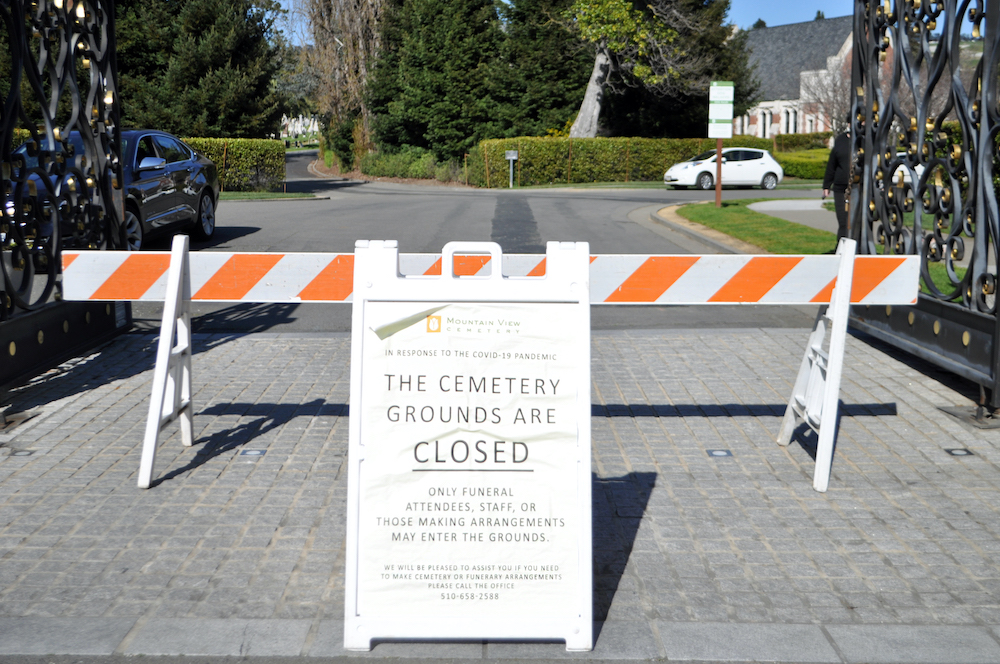 Mountain View Cemetery is hallowed ground dating back to 1863 for many Bay Area families. Designed by Frederick Law Olmsted, the privately-owned non profit, 223-acre cemetery has served as a final resting place for notables like Henry J. Kaiser, the Ghiradellis, Julia Morgan, Bernard Maybeck, Fred Korematsu, and many others. But the grounds — with sweeping views of the city — have also been open to the public for generations and are a beloved walking destination for many. That all came to an end on March 24 when the cemetery shut its gates to the public, citing “overcrowding” and the pandemic-related shelter-in-place rules. As 2021 begins, the cemetery remains closed to public use, prompting questions from locals as to what is really going on.

On Dec, 7, retired San Francisco Chronicle editor (and Piedmont resident) Allen Matthews took a deep dive into the cemetery’s history as a notable landmark and its current status. (Read the full Chronicle article HERE.) In the article, a spokesman for the cemetery said it was continuing to take a “wait and see” approach to reopening, despite the fact there are no Alameda County regulations prohibiting the opening of the cemetery to the public and a mounting number of calls for the site to return to pre-pandemic operations, including from Oakland Mayor Libby Schaaf.

The Mountain View Cemetery Association that oversees the cemetery does not list its trustees on its website. When the group was first formed in 1863, the first trustees included local notables, including Dr. Samuel Merritt. According to 2018 tax documentation, the cemetery’s recent board of directors includes several current and former Piedmonters — Charles Bates, Kenneth Meyersieck, and Deborah Castles (left the board in 2018.)

In response to Matthews’ article, on Dec. 19 Mountain View Cemetery posted an “essay” on their website, outlining a range of issues it says are preventing it from opening the grounds to the public again, saying “opening up the Cemetery involves addressing a host of unpleasant and expensive issues: trash left behind, dogs off leash or on plots, dogs biting other dogs or visitors, neighbors cutting fences to gain convenient access, trespassing, graffiti, drug and alcohol use, nudity, speeding and fighting, to name a few. In addition, over the last two decades, threats and complaints from a handful of neighbors, influential with the City building and planning departments, have cost the Cemetery millions of dollars in project delays, construction disruption, attorney’s fees and costs, citations, consultants and foregone revenue.”

The essay goes on to ask readers to put pressure on the city of Oakland to resolve a matter related to “Hill 500.” (This hill appears to be a plot of land adjacent to Plot 82, according to a 2017 City of Oakland Environmental Impact report related to the cemetery’s expansion project.)

“In 2018 the Cemetery made emergency repairs to its ‘Hill 500’ to prevent what had the potential to be a calamitous landslide threatening loss of life and extensive damage to graves and property. Neighbors complained and the City, without further inquiry, fined the Cemetery and attempted to prevent completion of the repairs,” the statement reads, going on to say that “if the City can stop its senseless enforcement actions against the Cemetery, we will have the resources to re-open, at least partially, to the community for recreational activities.” (Read the full statement HERE)

So what appears to have started as a reaction to COVID precautions has now morphed into a dispute with Oakland over a fine, keeping the public at bay for the foreseeable future. Because the cemetery is, quite literally, in Piedmont’s backyard, the Exedra will continue to track and report on any developments in this matter.

(Have a tip? Let us know at news@piedmontexedra.com)

One thought on “Is Mountain View Cemetery’s beef with Oakland keeping its gates closed?”