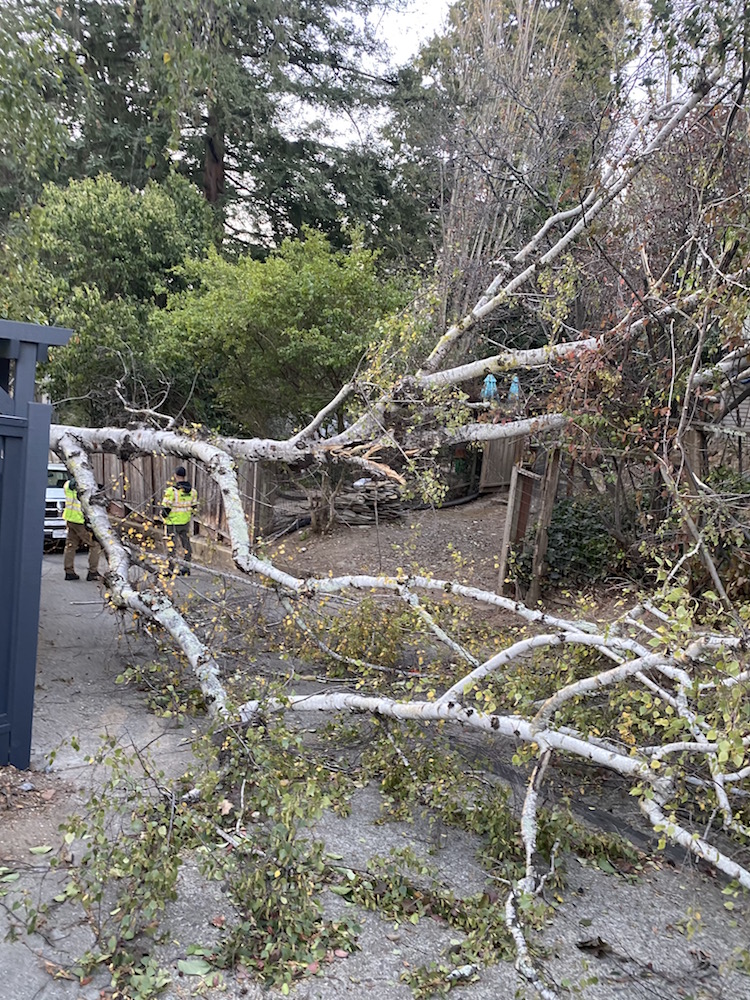 High winds and low humidity on October 25 led to PG&E announcing a widespread Public Safety Power Shutoff (PSPS) which included Piedmont residents. However, the private utility ended up pulling back on the power cutoff, so many residents ended up avoiding the shutdown.

Winds caused some tree branches to come down across the city but there were no major incidents, according to Piedmont Fire Chief Bret Black and Piedmont City Clerk John Tulloch.

“(There were) no major issues,” Tulloch said. “Lots of small branches down, which is expected especially in a wind storm in the fall. It’s good that it is taking place in the fall because there’s less load in the trees because the leaves have started to fall off.

“No injuries, some small property damage but nothing substantial.”

Added Chief Black, “We definitely seem to be over the hump so to speak or on the downward slide.”

The Piedmont Fire Department kept an extra engine in service over the weekend. Normally, the Department has one engine in reserve so that when another vehicle is disabled or needs repair, it is covered.

“We have a specialized wildfire engine,” Chief Black said. “That’s the one that we staffed up. It’s specially designed for wildfires. It’s small and agile and designed to zip around our narrow streets.”

He said the calls the Fire Department received were “pretty standard stuff.”

Tulloch said PG&E significantly curbed the number of customers who had their power cut as part of the PSPS program, but he was told some customers lost their power due to the wind storm. City officials are in constant contact with county officials and PG&E during these situations, with multiple conferences taking place every day.

“The county has had calls twice a day since this started where we have someone from PG&E on who can tell us what’s going to happen and answer questions when we have them. The city has been communicating directly with PG&E as well.

“It appears they’ve (PG&E) done a fairly good job of letting folks know when the power goes out or when they decide not to turn it off.”

Chief Black noted we are still early in the wildfire season and residents should not let their guard down.

“The winds did not turn out quite as high as we thought but the humidity was in the low teens which makes a wildfire easy to spread,” he said. “Even though it feels cold outside, the temperature is a lesser factor in that.

“Last year and back in February this year, we had the same kind of event where multiple trees are going down at the same time. A lot of times, they’ll fall into power lines or some other significant hazard. We’ll typically go out on some of the major tree hazards to make sure we can go around the street or maintain until PG&E can get out.

“This is probably just the first significant PSPS of the season. Don’t become complacent just because the weather’s cool.”

Both the Chief and Tulloch said preparedness is key. Have a plan, have a go bag ready and sign up for emergency alerts.

With Piedmont no longer in danger, a Black emailed the Exedra that a PFD crew loaded up an engine on Tuesday morning to head down and help out with the Silverado incident in Orange County. Cal Fire reports that blaze has burned 12,600 acres and is only 5% contained as of 2:44pm on Tuesday afternoon.