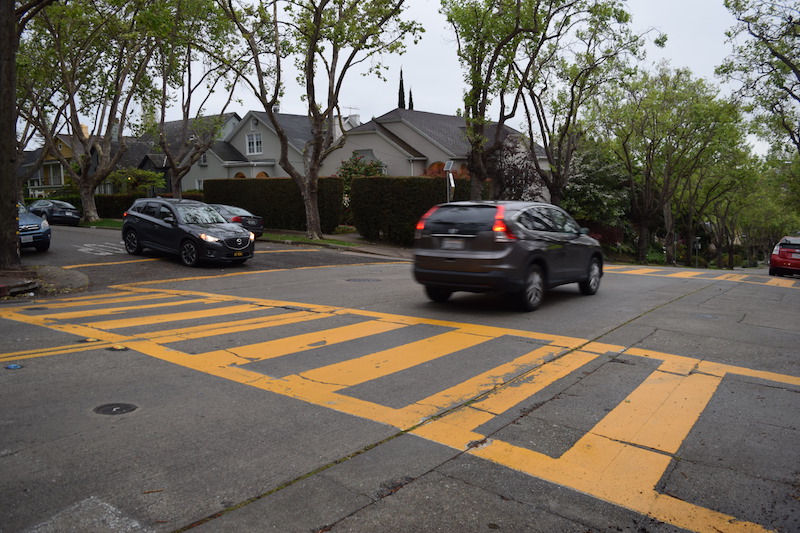 The City Council also on Monday discussed, in broad terms, a list of about 35 various street improvement and safety projects contained in a city staff report. Chester Nakahara, the city’s public works director, told the council he expects three of those projects to come before the council “for review and discussion” in the near future. Those projects are the permanent “bulb-outs” and associated improvements for traffic calming on Oakland Avenue at the intersections of El Cerrito Avenue and Jerome Avenue; a retaining wall replacement project and Oakland and San Carlos Avenues; and intersection and bike improvements at Lower Grand and Grand Avenues.

Other projects (view HERE) are in various stages of development, awaiting more planning, approval of preliminary designs, discussion with neighborhood residents or other step in the process.

Nakahara said Piedmont was laid out before the automobile was a common mode of travel, and that a city not necessarily designed for motor vehicles now, in the year 2020, seeing more and more vehicle traffic.

“We need all Piedmont residents, and those that pass through the city, to be more careful and more cautious,” Nakahara said. “We need to pay attention, and we need to slow down.”

Councilman Tim Rood asked for a future report on how these various projects come to the council “in a transparent and public way,” and for more traffic data to better inform what projects are the most urgently needed.

One project on the city list is called the Oakland Avenue/Greenbank Avenue/Grand Avenue/Cambridge Avenue Traffic Mitigation Study, which is designed to take the place of a September 2019 plan that called for striping and  “bollards” — short, moveable yellow traffic-guiding posts — at the intersection of Oakland and Greenbank Avenues (below).

Mayor Robert McBain and Councilwoman Jen Cavenaugh said they are fine with rethinking the Greenbank Avenue approach. “I rarely have had an approved project so disliked by everybody,” McBain said.

Many of the proposed traffic safety improvements figure to be included in the update of the city’s 2014 Pedestrian and Bicycle Master Plan, which will increase the original plan’s on general traffic safety. To learn more about that update work, go to www.piedmontsaferstreets.org.