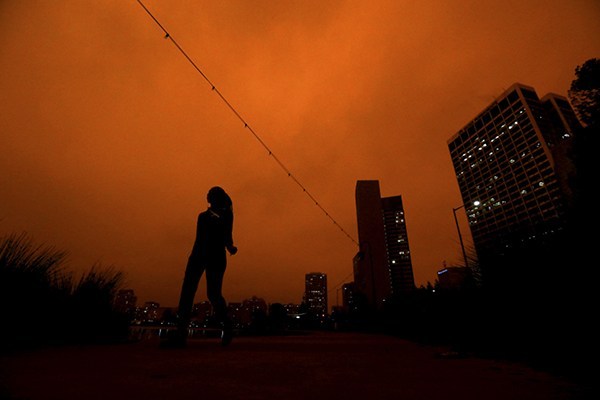 Just when it seemed like 2020 couldn’t get any more apocalyptic, millions of Northern California residents will likely spend their Thursday under a dark orange sky clouded with ash — just as they did yesterday.

The menacing color and lack of sunlight amplify an already foreboding atmosphere caused by historic wildfires that have now burned more than 2.5 million acres. Strong winds pummeled California Tuesday night, spreading existing blazes and stoking new ones — including the fast-growing North Complex Fire (which comprises the Bear Fire) and the Willow Fire — that prompted thousands of evacuations and killed three.

The North Complex Fire is threatening several communities in Butte County, including Paradise — the town that burned to the ground in 2018 amid the most destructive wildfire in state history. (To keep track of all the current blazes, check out the Los Angeles Times’ fire map.)

Around 14,000 firefighters were battling 28 major fires on Wednesday, up from 25 the day before. Also on Wednesday, the U.S. Forest Service closed all 18 national forests in California in what amounts to the most extensive fire closure of public lands in state history.

With winds forecasted to let up for the rest of the week, PG&E expected to restore power by Wednesday night to most of the 172,000 Californians affected by outages earlier this week. But the utility said restoration work could be delayed by hazy conditions — a problem for much of California, which had the worst air quality in the nation on Tuesday.

For more on why California’s wildfires are worsening and some possible solutions, check out these comprehensive explainers from CalMatters’ Julie Cart and Judy Lin.

Struggling California small businesses could see a financial lifeline under two bills Gov. Gavin Newsom signed Monday, the Los Angeles Times reports. One allows small businesses to exclude federal Paycheck Protection Program funds from their state income taxes, while the other extends a $100 million tax credit to incentivize small businesses to restore jobs slashed amid the pandemic. However, an Assembly committee analysis found that “sophisticated businesses at the larger end of the small business range” could disproportionately benefit from the tax credit, potentially leaving smaller businesses in the dust. Also on Monday, Newsom signed a bill that appropriates $561 million for the next fiscal year, most of which will be used to stimulate the economy, including jumpstarting construction projects. (Other stimulus plans became political casualties, as CalMatters’ Lauren Hepler reports.)

It’s back to school for many California colleges and universities — and coronavirus outbreaks have already caused at least one campus to send most of its students home. Coronavirus testing practices vary widely across campuses, often reflecting their financial resources and access to testing equipment, CalMatters’ Mikhail Zinshteyn, Felicia Mello and Kimberly Morales report. For example, each University of California campus is testing all students living in dorms, while 12 of the 23 California State University schools don’t offer any on-campus testing. And at the University of Southern California, students living in dorms are tested every week.

In a win for citizens and special interests hoping to pass tax increases and local governments that would reap the funds, the California Supreme Court declined Wednesday to review an appellate court’s June ruling that San Francisco did not break the law by allowing a 2018 ballot measure that hiked business taxes for homeless services to pass with a simple majority of the vote. San Francisco now has the green light to start spending the tax money it had collected amid the legal challenge.

By declining to review the ruling, the state Supreme Court sided with San Francisco’s argument that tax increases placed on the ballot by citizens only need a simple majority to pass, while those placed by lawmakers need two-thirds to pass. But with other lawsuits pending in appellate court, their Wednesday decision isn’t necessarily the last word on the issue.