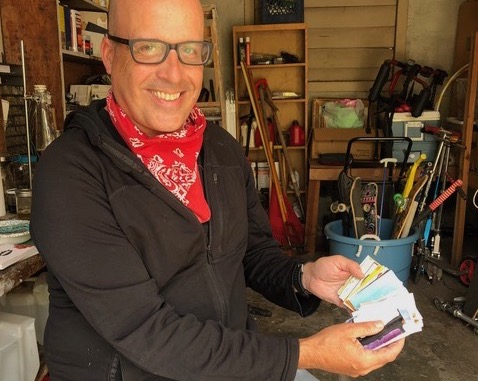 This article was updated on Aug. 18 with corrections about Schleuning’s volunteer work with Piedmont Arts Fund and Piedmont Makers; a watercolor-making class; and the spelling of Schleuning’s wife’s name, Hilary.

Artist Jon Schleuning’s Piedmont neighborhood has provided him the perfect environment in which to discover the materials he uses for his art. Within walking distance of the nostalgic and vibrant assortment of businesses along Piedmont Avenue, the homes in the area retain the human scale of their original 1920’s bungalow architecture. Stately old trees and glimpses of camellias, roses and rhododendrons planted years ago add to the firmly grounded quality of the place. It’s a place designed from the beginning to enhance connections between families, everyday life, and the outdoors.

Schleuning and I began our conversation about his art practice in the cool gray mist typical of a July morning in the East Bay.  After throwing open the door of his backyard studio, a small building originally intended as a garage, Schleuning described the path he took to create the world within a world that is his art.

Jon Schleuning is a painter who can also be described as a forager, chemist, and ink maker. In addition, he’s an all-around good guy, someone familiar to many Piedmonters as the father of three children who attended Piedmont schools, a dedicated volunteer who served as president of the Beach Elementary School Dad’s club and who is active in the Piedmont Arts Fund and Piedmont Makers.

Schleuning’s interest in art has deep roots. His father is a noted Portland, Oregon architect and both his mother and father are highly skilled painters. During his years as a project director at the renowned Pentagram Design firm, Schleuning worked with some of the most talented graphic designers in the world to bring projects such as the California Academy of Science to reality.

A basic premise of his artistic intent was, and still remains, the idea of “small to big.” Large scale sculptures he created of pencils, lightning bolts, and birds for PAINTS fundraising auctions illustrate that concept. Through the use of everyday objects, Schleuning hopes to share his belief that “anyone can be an artist, can feel that spark of imagination, pick up a pencil” and make someone smile.

Gradually, Schleuning began to realize that his artistic projects had led him to an art practice that as a creative outlet gave him great satisfaction. He took a watercolor-making class at San Francisco-based Case For Making which opened up a world of pigment and natural color. From there, he learned of the speciality art supply company Kremer Pigments based in New York City.  A pivotal moment in his art career happened when he took a class in foraging for local plants and materials that could be used to make ink — an old, primary tool of human expression, made with humble materials such as oak gall (a small, round growth created by a tree’s reaction to wasp larva) and charcoal.

In a masterpiece artwork composed of 100 2” x 3” miniature landscapes sharing the same horizon line, Schleuning uses his own handmade inks to capture in no more than a couple of gestures the entire universe. The inks are crafted with materials such as library pencils gleaned from Yountville and subsequently charred on Schleuning’s backyard grill, bark and leaves from the Sycamore trees in his front yard, and oak galls gathered in Contra Costa County which are boiled on a hot plate in his studio. (His wife Hilary no longer allows him to use the household stove after an experiment went awry.)

Ink making has a history as long as humanity, and a nearly infinite variety of source materials, binding agents, and recipes for preparation.  From his spot in the East Bay, Jon Schleuning brings a bit of this universal history into his art and shares it with the world.

To learn more about Jon Schleuning and his art practice visit his website and his Instagram page: www.instagram.com/js47/?hl=en @js47