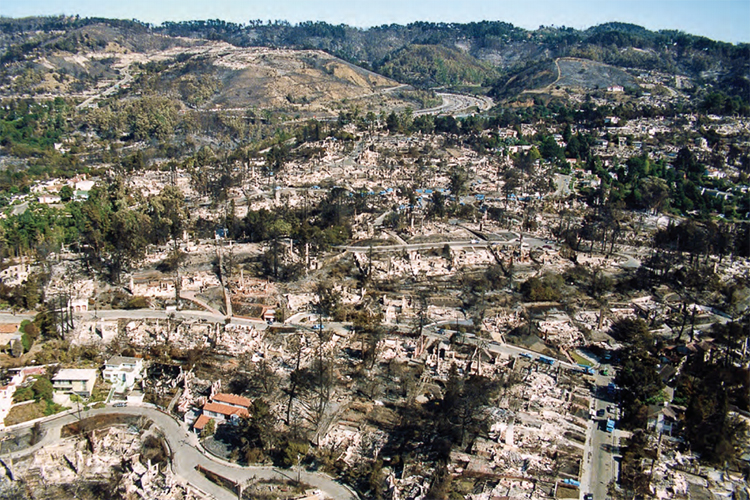 The wildfires all over the Bay Area raise an important question: What should Piedmont residents do if a fire broke out in the East Bay hills?

It has been nearly three decades since the East Bay hills erupted in fire, one of the largest disasters in area history. Over the past few years, huge fires have broken out in the North Bay, the South Bay, the Peninsula. The threat is very real.

Piedmont Fire Department Chief Bret Black said it’s important for residents to prepare. That means having a “go bag,” with food, medicine and supplies to last several days. That means setting up a meeting place for family members. Most important, that means being ready to go before firefighters or police officers knock on your door.

“There’s not enough police and firefighters to go door to door in Piedmont or in any town,” Chief Black said. “The best we can hope for is that we will have time to drive the streets with our loudspeakers to warn the people.

“Don’t wait to be told to leave. If you feel unsafe, leave. Don’t wait for that notice on your phone.”

Residents are asked to sign up for AC Alert, the county alert system which will send information – including an evacuation order – to your home phone, business line, cell or email address. Residents can subscribe at https://www.acgov.org/emergencysite/. Once you have an account, you need to keep it updated. The alerts are targeted and Chief Black said he has heard from residents who had moved and either didn’t receive an alert or received one for an address they had moved from.

“It’s real important to let people know that they have to update it,” he said.

An evacuation alert would include a safe place to evacuate to. Many residents ask to know these places in advance. However, the fire and police departments cannot know where to locate an evacuation center for a particular disaster will be because fires can burn in many different directions.

“Wildfire is dynamic,” Chief Black said. “There is no way to predict which way a fire is going to go in advance. We are only 1.7 miles or 1,100 acres. In a bigger city, they have gridded a city. But a lot of those grids are the size of Piedmont.

“We’re hesitant to say to [head in any particular direction]. It is so situational and it is so dynamic. It’s not like a hurricane. It’s not a mono-directional event. It’s going to be all around us.”

Said Piedmont Police Captain Chris Monahan, “It would really depend on the circumstances. Fortunately, there are several paths residents can take to evacuate from the city.

“Where they go would depend on what is at risk.”

The fire department has a webpage dedicated to evacuation resources (piedmont.ca.gov/cms/One.aspx?portalId=13659823&pageId=16993951). It includes emergency preparedness information including how to put together your go bag. Some items are obvious — non-perishable food, potable water, a first aid kit, flashlights, batteries. However, if anybody in your family gets a new prescription, it’s important to add that to the kit.

Fires often destroy cell phone towers, so family plans must include a meeting place that everybody knows to head to including children and elderly relatives. The meeting place should not be “the tree in front of the house” for a wildfire, Chief Black said.

“I encourage people to have a collection point or several that you practice,” Chief Black said. “This is where we’re going to meet. It does need to be something that families prepare for. Even if families don’t live together.”

He added that a family can pick a spot and have everybody meet up there for practice.

“Everybody should know where to go,” he said. “It shouldn’t be, ‘I need to go down the street and find grandma.’ And it shouldn’t be somewhere very close.”

Captain Monahan said planning in the city is ongoing.

Chief Black said that one of the Piedmont Fire Department’s crews has been assisting with the SCU Lightning Complex, which is burning in five counties including Alameda, Contra Costa, Santa Clara and Stanislaus. According to Cal Fire, as of August 25, it had burned over 360,000 acres and was at 15 percent containment. The crew was sent on August 21.

One thought on “If a wildfire threatens Piedmont, do you know what to do?”