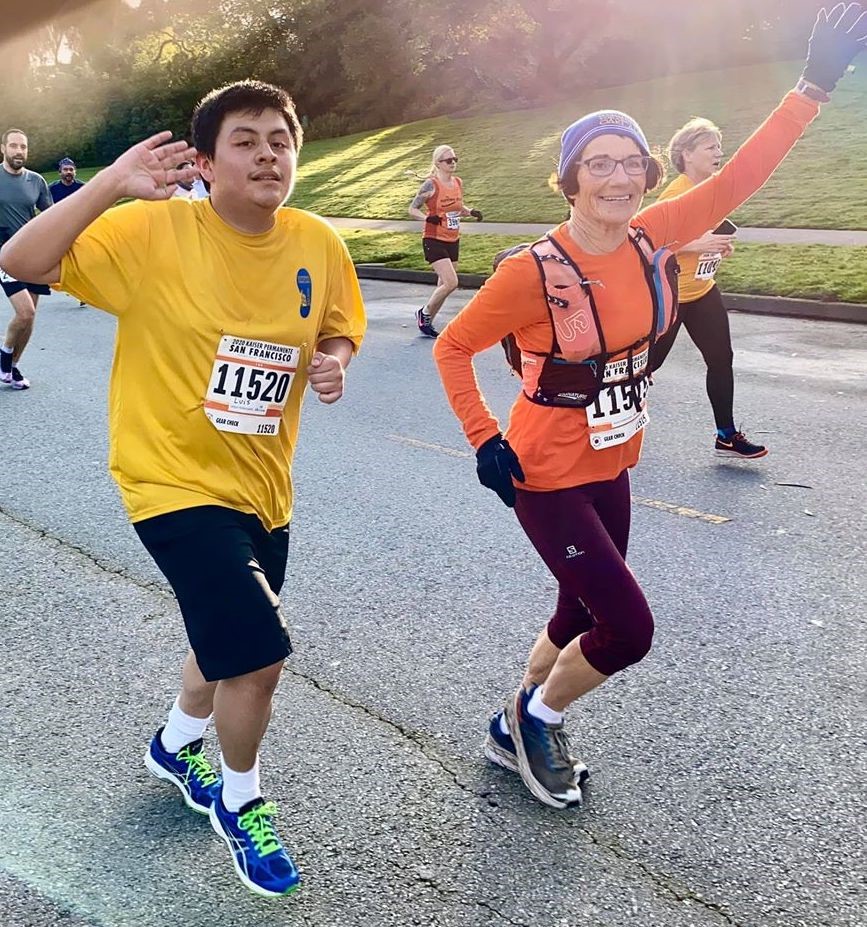 “In school I was hiding,” she said. “When I was in high school, I used to hide from the P.E. teachers so I wouldn’t have to run laps.”

Chapon grew up in France, but moved to Colorado in her 20s. She was interning there for her career teaching molecular biology.

“The scientists there, they were runners so I went running with them,” she said. “They took me into the forest and I didn’t know where I was so I had to stay with them.”

Soon, she was running marathons. She didn’t run in college the first time around, but in 1999-2000, she competed for Skyline College in the West Bay and was named the team’s Most Valuable Player in 2000, when the Trojans won the conference title.

Eventually, she took up coaching. She now co-coaches the Piedmont Middle School team with Minori Tsuge, helps out with the Piedmont High School runners, and is the coach for Running for a Better Oakland (RBO), a non-profit that helps kids develop healthy lifestyles through running.

“I love to coach the kids because they give you back a lot,” Chapon said. “You learn a lot from them. You teach them and they teach you. And I like to see how they gain confidence. When I was young, I was chubby and nobody would take me on their team. I really like to promote the desire for running and exercise among kids.”

Len Goldman recruited Chapon into coaching. She said, “Len Goldman taught me everything I know.” Goldman brought Chapon to another non-profit, Students Run Oakland. Its mission was similar to that of Running for a Better Oakland. Chapon would train kids and take them down to Los Angeles to run.

That non-profit went out of business in 2010. About a year later, Tod Vedock and his wife Jen co-founded Running for a Better Oakland. Chapon was brought on as coach. She runs with the kids but, more important, pairs each kid with a mentor runner. The mentor could be an adult or a high school or college runner. Several Piedmont High School students have served as mentor runners, including Ellie and Maggie Black, Colin Mortimer, Alex Weekes, Max Podell and Tim Taylor.

Other people from Piedmont involved in the program include Beth Black and Rick Rosenbaum, who help Chapon coach.

In a normal year, Running for a Better Oakland athletes will participate in the Kaiser 5K and 10K in San Francisco, the Lake Merritt Relay, the Oakland Running Festival, the East Bay 510K, and the Hella-Ween 5K. Practices are held on Saturday mornings at Lake Merritt, and sometimes during the week at area schools.

As if Chapon wasn’t doing enough, she serves as the Volunteer Coordinator for the San Francisco North Face Endurance Trail Challenge and the Oakland Running Festival.

3 thoughts on “From hiding to leading the pack”