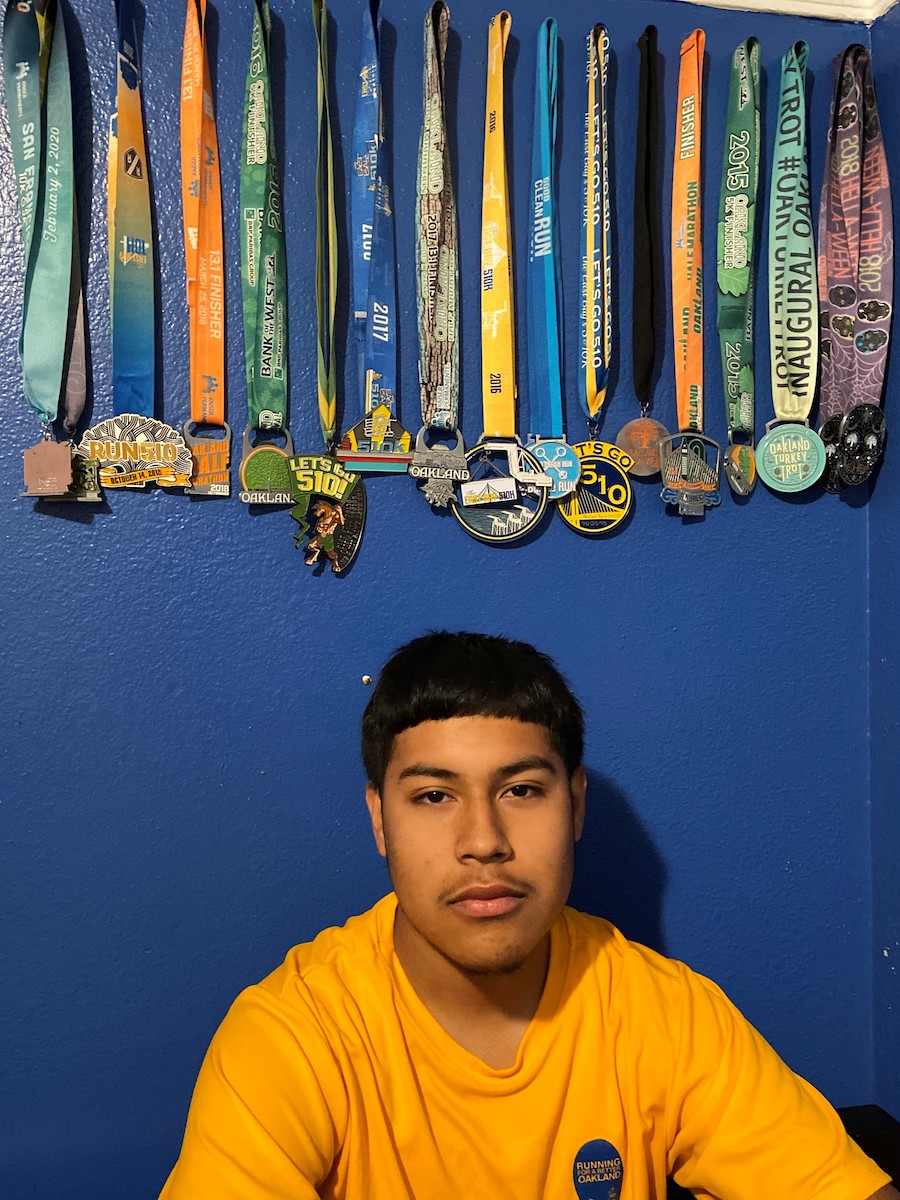 When 17-year-old Axel Cipriano runs, the whole world falls away, leaving only stillness and calm.

“It clears my mind,” Cipriano said. “I didn’t know running was my space, my peace space.”

He started to figure it out way back in the sixth grade, when he was dragged into the sport by a group of friends who were training to participate in foot races with hundreds of other students as part of the Running for a Better Oakland program.

Since then, and before the novel coronavirus pandemic changed everything about our lives, Cipriano would spend many of his precious Saturdays running around Lake Merritt with his fellow athletes and their volunteer mentors.

He would wake up at 7:30 a.m. — a ridiculous weekend hour for many youngsters — to eat breakfast, get ready and make his way from East Oakland’s North Stonehurst neighborhood to be at Snow Park by 9:30 a.m.

“There’s a tent where we check in and check out,” Cipriano said. “We start with a big group doing warm-ups and stretches and things like that. Then the coaches say how much we’ll be running that day and a mentor runs next to you.”

At first, honestly, he says it wasn’t much fun. Particularly the early morning wake-ups. He was ready to throw in the towel.

But then a higher power intervened.

“My mom, ever since I was a little kid, she’s been motivating me to do more than what I’ve done, it’s inspiring,” Cipriano said. “There was a point in time where I just wanted to quit.”

He stuck it out, and because he did, Cipriano is now one of 10 high school seniors from Oakland who will be splitting $17,100 in scholarship money from RBO this year.

“Ever since I was small, my mom told me that hard work and dedication will pay off and now I’m actually seeing that,” he said.

Cipriano, who is graduating from Lighthouse Community Charter School this year, plans to attend Chabot College and eventually transfer to a four-year university to study business administration.

He wants to someday open his own autobody detailing shop, a dream inspired by his father, who runs a tow truck operation that employs his son and Cipriano’s mom.

He also said he’d like to some day come back to RBO as mentor, which to founder Tod Vedock is evidence of the program’s enduring success.

Ten years ago, Vedock, who helped organize the Oakland Running Festival, had a vision of seeing Oakland kids running through the town to cheers of adoration.

“When you cross that finish line, there is five seconds of euphoria that you’ve probably never felt before,” Vedock said. “Some of the toughest kids come across in tears, some kids come across giggling, and some are like a dear in head lights.

“People are cheering and the music is playing and if I can get them to that, I’ve got them hooked,” he said. “That’s what we’re trying to get them to feel — if you can do that, you can do almost anything else.”

Vedock says RBO takes any kid, from any part of town, in any situation.

The organization provides free training, shoes, shirts, sports bras, rides to practice and races and even covers the cost of race entry fees for every runner.

One of the most important resources RBO offers is the mentorship program, which pairs runners with adults who help guide their training.

The relationships that develop can reach beyond the sport, Vedock said.

“There are kids that went to college that are still in touch with their mentors,” he said. “They have that relationship for life.”

Nineteen-year-old Oakland Tech senior Christine Li, who is also an RBO scholarship recipient, joined the program in the spring of her sophomore year because she was drawn to the mentorship program in a different way — she wanted to be one.

RBO is open to students from kindergarten to 12th grade and its “Green Team” is composed of older kids who are paired with the little ones.

“Training them to run at a pace was really hard,” she said.

Li found ways to motivate her charges, inventing games, cajoling them to race to the next lamppost or pretending they were all being chased by a monster.

“Then we’re just running and chatting about our lives,” she said. “I love having conversations with them.”

Li, who has been able to parlay her experience as an RBO mentor into similar opportunities at local summer camps, eventually decided to take on a half-marathon, which is one of the requirements for earning a scholarship.

“I wanted to achieve something big in my senior year,” she said. “It’s a power move.”

Still, even though she enjoyed the training, it was tough on her.

During the week, she’d work as a Starbucks barista after school and then head home to tackle hours of homework.

“I was so drained. I did not have the motivation. I did not want to wake up to go run,” she said.

But she knew if she didn’t drag herself out of bed and head over to the lake on Saturday morning, she’d be disappointing her mentor and her running buddy, Nick.

“When we run it’s not just about running a race, but it’s about getting to know one another and enjoying each other,” Li said. “I didn’t think about it as a competition.”

Li plans to use the scholarship to help pay for books and meals when she attends Cal State Long Beach, where she’ll study kinesiology.

She said she’s relying on her parents for college expenses and the RBO money will help defray some of their costs.

“Sometimes I think about it and I just cry,” she said.

And while the COVID-19 restrictions have put the kibosh on all the traditional senior year activities, as well as the Oakland Running Festival’s half-marathon, which all the RBO scholarship recipients were scheduled to run, Li is still very much planning for the future.

“One thing’s for sure, when quarantine is over, I’m doing a 27-mile walk with my friends,” she said.

“I already planned it out. We’ll be starting from Lincoln (Elementary School in Chinatown), to Grizzly Peak, to a friend’s house in the hills, and then all the way down to Lake Merritt and Jack London then look at the view and just celebrate,” she said.

Christine Chapon, RBO’s head coach and an indefatigable fundraiser, said about 200 kids from K-12 schools from around the city were in the program this year and that the organization decided to give the scholarships to seniors and five alumni despite the fact that training and races were canceled due to the coronavirus pandemic.

“We feel the students and their families may be facing serious hardship,” she said.

Chun Huang, 17, was pleasantly surprised when he learned that even though the race was off, RBO was still awarding scholarships.

Huang is an Oakland Tech senior and competitive swimmer and was recruited by Li to join the program when the pair bumped into each other while running the lake, Li with her RBO team, and Huang all on his own.

Huang ran to stay in shape for swimming, but had never been coached in the sport.

“I didn’t know there was a technique for running,” he said. “I figured out for like distance running I’m supposed to use less of my arms to conserve energy so I can run long distances.”

He echoed the comments of other students when he said he was disappointed and frustrated that the race was canceled a week or so before it was scheduled to kick off.

“I was super excited for the half-marathon because I know I trained so hard and all the teammates on RBO have been training very hard,” Huang said.

Huang, who is wait-listed at UC Berkeley and is also considering Cal Poly San Luis Obispo, said he wants to study architecture and will use the money to buy text books and for tuition.

And while it’s unclear when it will again be safe to gather and train, or what form that training will take, RBO organizers and volunteers plan to moving forward as best they can for as many Oakland kids as possible.

“We want the everyday kid, the kid who never ran before, the unmotivated kid, we’re looking for somebody that just needs a boost,” Vedock said.

Information about volunteering for, donating to or participating in RBO can be found on its website: https://www.rboakland.org/

One thought on “‘It’s not just about running a race’: Oakland group provides platform for local kids to excel in life”