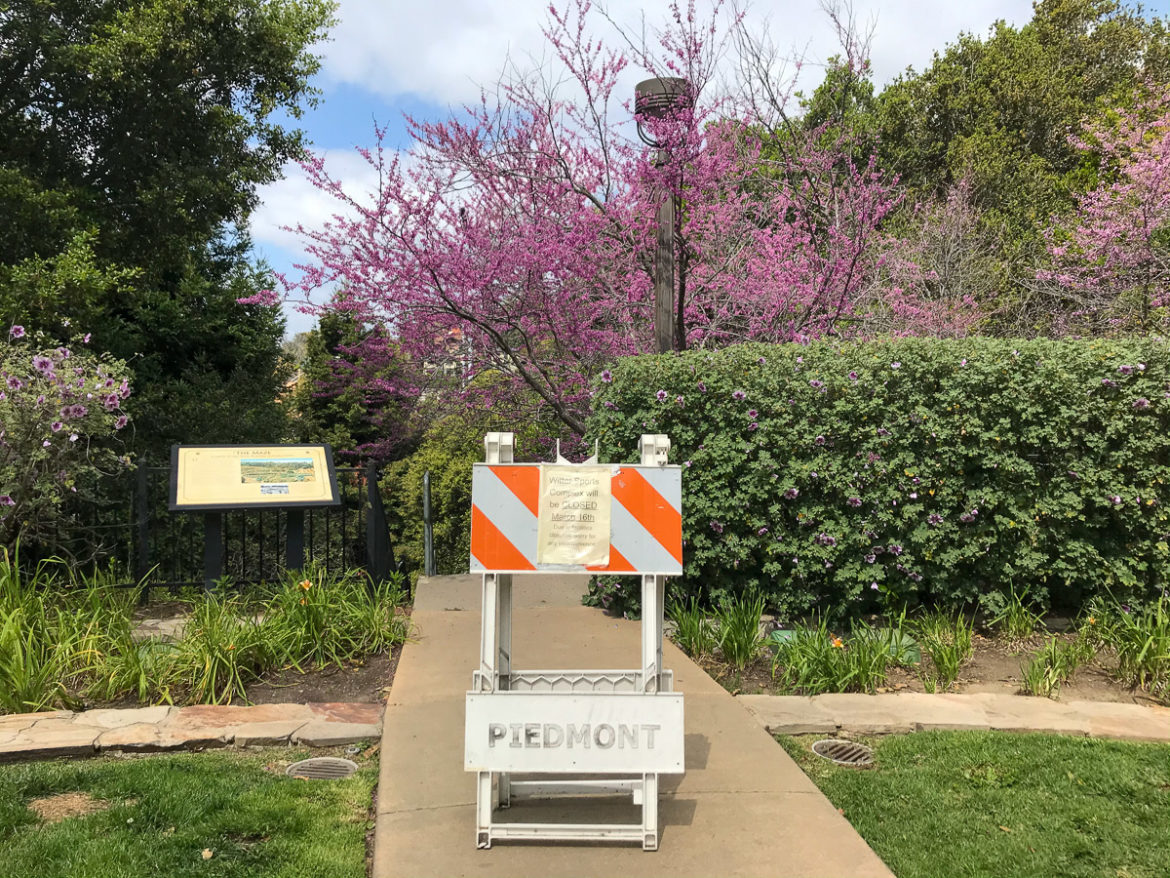 PIEDMONT — Teddy Gray King said she gets comments all day long on social media and email about Piedmont’s total closure of local parks and sports fields.

The comments are approximately evenly split, the vice mayor said, between those who say the closures are too onerous and those who insist the city still isn’t doing enough to enforce Alameda County’s COVID-19-driven social distancing rules.

“It’s every day, it’s all day, from the minute I wake up and take the dog for a walk, and it’s all over my Facebook,” King said Monday night during a  City Council discussion of life in Piedmont in the era of novel coronavirus.

But King was clear that she supports the city’s firm approach. “I think we’ve set a standard in our town about how to address this,” she said.

The April 1 closure of the city’s parks and sports fields was one of a number of COVID-19-related topics covered in an hour-long discussion Monday night among council members and city department heads.

City Administrator Sara Lillevand reiterated that police officers were seeing “numerous and frequent violations” of restrictions on congregating in local parks and on sports fields, especially the six-foot social distancing mandates included in the Bay Area’s blanket shelter-in-place orders. That, she said, prompted the total closure.

“[Piedmont’s is] a more rigid approach than some of the other cities in the county, and one that we continue to get questions about,” Lillevand told the council, noting the decision to do that wasn’t made lightly. Partial closures, she said, can create confusion about what is allowed and what isn’t.

The timeline for reopening the parks, Lillevand said, is largely up to the Alameda County Health Services Agency and their COVID-19-related decisions.

Among the other coronavirus-related topics discussed Monday were:

Some council members noted that some area cities, including Hayward, Berkeley and Bolinas, are providing COVID-19 testing for their residents.

Fire Chief Bret Black said Hayward and Berkeley already have facilities geared to providing health services, and that Bolinas’s testing is being done in conjunction with UCSF infectious disease researchers.

Black said Piedmont doesn’t have the infrastructure to do its own testing program independently. “It doesn’t really behoove us to do that unless we’re part of a bigger system,” he said.

Lillevand and Piedmont Recreation Director Chelle Putzer described the quick pivot of PRD’s services from live and in person to online. There has been a bit of a learning curve, Putzer said, but the earliest online offerings were popular. There were 84 total openings in the initial classes offered, and 65 were filled, she said. She expects an expanded list of offerings soon.

Also, PRD members were to have started on Tuesday an outreach to Piedmont’s senior citizens, phoning them to make a quick check-up on them, ask them if they need anything and provide at least a little companionship.

Councilwoman Jen Cavanaugh asked whether Piedmont department heads had considered a program similar to what Oakland is doing with “Slow Streets,” closing streets to through vehicle traffic to allow people to recreate and distance. Lillevand said that had been discussed at length, with the idea ultimately rejected.

The two main reasons for saying no – opening a street to recreation would attract people, counter to the concept of social distancing, and a closed street could create a “false sense of safety” because some local vehicle traffic would still be allowed.

That said, councilwoman Betsy Smegal Andersen acknowledged the city’s narrow sidewalks, and how that can be problematic when social distancing is crucial. Being conscious of keeping to the right at all times is an important practice at this point, she said.

Piedmont parks workers have been doing only essential work, Lillevand said, with an emphasis on vegetation control to reduce fire danger. Upper and lower Dracena Park and the Linda dog run have seen major brush clearing, and the Bushy Dell Creek area of Piedmont Park is now less bushy than before.

Regarding the closure of parks, Mayor Robert McBain said he’s heard from the public, too, including about the closure of the Hall Fernway, a path that connects Wildwood and Crocker Avenues.

McBain said he is glad people are keeping a sense of humor about things.