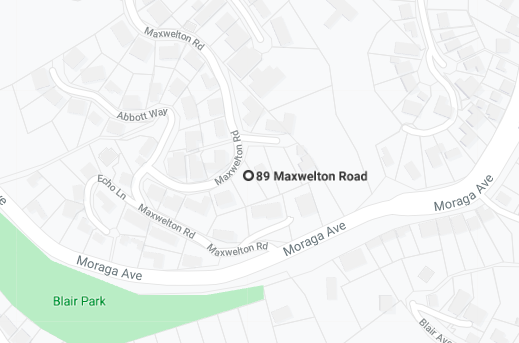 In a rare move, the City Council on Monday night unanimously overturned an Aug. 12 Planning Commission ruling that had denied design approval for an accessory dwelling unit (ADU) property on Maxwelton Road.

Property owners Joyce Tang and Keven Kwok had appealed the Planning Commission’s decision to deny an application for the unit on their property at 89 Maxwelton Road on Aug. 21, saying the Commission had “made significant errors in making its decision, that the decision was not supported by the weight of the evidence, and that the Commission’s denial of the application was in violation of state law.”

Construction of the 798-square-foot dwelling and patio area would entail removing two oak trees, creating a 38-foot descending pathway, and excavating soil on the hillside. Although the application was made separately, the unit sits on the same property where the Kwok’s plan to build a larger home, a proposal approved by the commission last December.

In their review, city staff determined that although they did not believe the Commission violated any laws in denying the application, the “mother-in-law” unit application did in fact meet design guidelines and code requirements, noting that the Commission’s findings “are not supported by the weight of the evidence” and made the recommendation that the City Council vote to overrule the Planning Commission’s original 3-2 application denial. (You can view the full staff report here.)

The ruling comes after three and a half years of contentious relations with neighbors on Maxwelton, who opposed the Kwok’s original large-scale home design proposal. That project was denied twice by the Planning Commission before a compromise plan endorsed by neighbors was approved on December 18 and a building permit is now being processed for that part of the project.

Several Maxwelton neighbors spoke to Council members at the meeting, citing a range of concerns related to the development of the Kwok’s land. Referencing the project’s history before the Planning Commission, resident Jack Preston told the Council that the application was a “bait-and-switch” and asserted that the Kwoks “have taken advantage of technicalities in the city’s and other ordinances and bent the rules to their own uses.”

Philip Stein, whose home is adjacent to 89 Maxwelton, described the situation as a “saga” and asked the council Monday night to take the whole history of the project into consideration when considering the appeal.

Lucas Tomsich, whose home is also adjacent to the property, faulted the staff report for not considering the full context of the years-long project and voiced specific concern about loss of privacy and hillside stability related to the excavation issues that will be necessary for the construction.

Property owner Joyce Tang told the Council she and her husband believed they had no choice but to approach the process in two steps because they did not believe their ADU proposal was receiving fair consideration as originally proposed. “If a neighborhood has not historically had an ADU, it does not exclude it from ever having one. And the character of a neighborhood could and should evolve over time,” she said.

A narrow consideration and ruling

The City Council’s liaison to the Planning Commission, Councilwoman Betsy Andersen, noted that reasonable minds can disagree over Piedmont’s often “complex and contradictory code” and that she found no “error” in the Commission’s judgment. Nevertheless, she agreed with the staff report’s findings, and made clear that the contentious history of the main house project was not germane to the narrow issue before the council of whether or not the design of the accessory structure met city guidelines. She did call for an increase in liability insurance from $1 million to $2 million as a condition of the appeal, given the attendant risk of excavating the hillside and the fact that the median home value in Piedmont is now approximately $2 million.

Mayor Bob McBain concurred with Andersen, and noted that overturning a Commission’s ruling was a rare event but on occasion a necessary step.

Councilmember Tim Rood re-emphasized that each project must be considered on its own merits, rejecting the notion that the ADU proposal should be viewed in context of the earlier controversial project.

Vice Mayor Teddy Gray King expressed her hope that the residents of Maxwelton Road would take the opportunity to reconcile and move forward in a collegial and constructive manner.

Although property owner Tang told the council on Monday that the additional dwelling on their property is intended to allow for personal flexibility for themselves, aging parents, or a nanny, Piedmont has been grappling with ways to meet state affordable-housing goals for years, and encouraging the addition of secondary units on property has been one approach. (See our earlier reporting below.)

The decision also comes against the backdrop of the Housing Accountability Act signed into law by Gov. Gavin Newsom earlier this month, a measure that contains provisions designed to make it easier for people to build so-called “granny flats” or “mother-in-law units” on their property as one way to address the housing crisis in California.

Councilmember Jennifer Cavenaugh noted that “any additional units are meaningful as we have very few opportunities to provide solutions for affordable housing. A unit of housing matters, and we need to be prepared for where Piedmont is heading.”