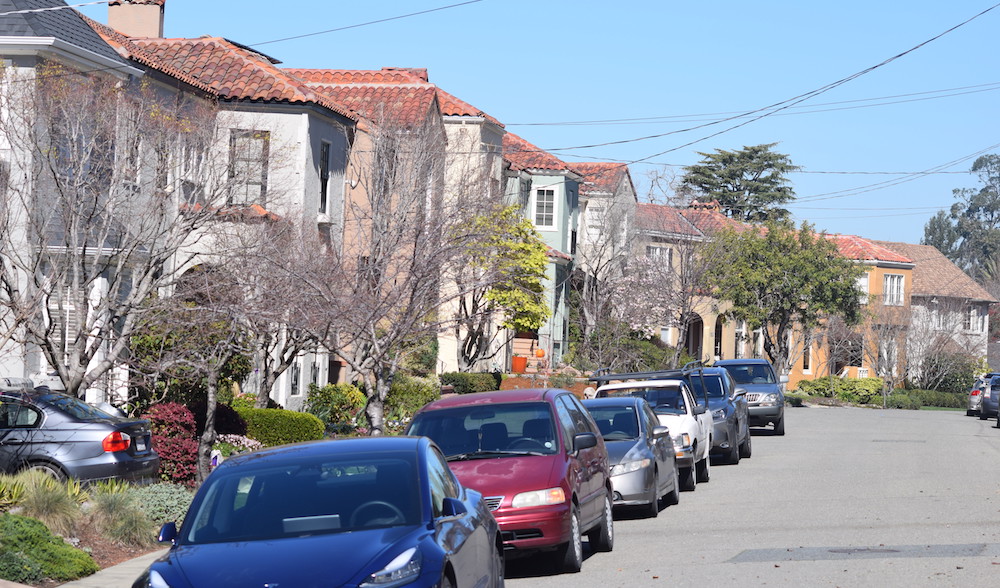 Waldo Avenue. As is the case in many Bay Area cities, Piedmont is running behind on its plans to accommodate affordable housing. City officials also know they have a balancing act to perform in accommodating new homes while maintaining the city's stately character. (Photo by Sam Richards)

California Senate Bill 2 provides funding for affordable housing available through a grant program. Small jurisdictions such as Piedmont are eligible for as much as $160,000 in grants for projects that streamline development of new housing. Such grant-funded projects must be in place by 2022.

“Affordable,” in this discussion, is defined as meaning 50 percent of a project’s housing units are for occupants earning 80 percent or less of Alameda County’s annual median income

Piedmont could use help in developing affordable housing. The city is on a list compiled by the state Department of Housing and Community Development of 148 cities, towns and counties statewide that have not met Regional Housing Needs Allocation affordable-housing goals, or Piedmont’s own goals.

The grant money, if the city gets it, would help identify federal, state and county funding sources for incentives to develop affordable housing; would help the city develop new “affordable ADU” strategies and incentives for Piedmont homeowners and residents; and develop new design standards for multifamily and mixed-use buildings of all income levels in Zones C (small areas along Oakland Avenue on the city’s west end a few other scattered locations) and in the city’s two small commercial zones.

Piedmont’s construction of “affordable” housing units — primarily accessory dwelling units, or “mother-in-law” units — for low- and very-low-income residents, has lagged behind the city Housing Element’s goals of 38 affordable units by the end of 2022. The last Housing Element Annual Progress Report showed that the Piedmont issued building permits since 2015 for the construction of 26 new units out of a Regional Housing Needs Allocation allocation of 60 new units by the end of 2022. Of those 26,  nine are proposed as low- or very-low-income.

Council members and city staff said Monday night they can use any help at their disposal to uncover or create ways to develop and encourage affordable housing are more than welcome. That task became more difficult in 2016 , when two state laws governing accessory dwelling units compromised Piedmont’s ability to encourage affordable accessory units by undermining a parking incentive for landlords to keep rates affordable.

Planning for affordable housing — and any housing, for that matter — in Piedmont can be tricky, council members and city staff said Monday.

Planning multifamily buildings in a city known for its stately homes is a tall, but not impossible, order, said Councilman Tim Rood, who noted that several living units could be housed in a large building that looks like a large, stately house.

Councilwoman Betsy Smegal Anderson said the affordable-housing and development-guidelines issues are intertwined, and suggested a public town hall meeting on the subject would serve both the public and the city — that is, if there’s enough time to hold one. Application deadline for the city is Nov. 30.

And council members stressed that Piedmont will likely have to make some degree of compromise in hosting new housing, affordable and otherwise.

“People know what the realities are on this issue,” she said.