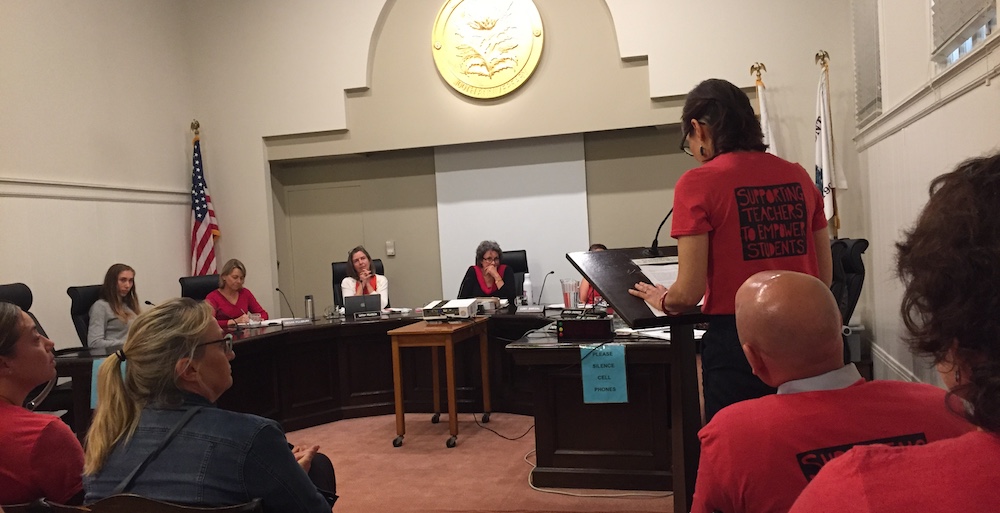 Teachers speak to School Board on Wednesday, September 11, 2019.

City Council chambers was awash in red on Wednesday, Sep. 11 as members of the Association of Piedmont Teachers (APT) stood before the Piedmont Unified School District (PUSD) School Board to share personal stories of the financial hardships they face and why a one percent raise offered by the District is not enough to cover the rising costs of living in the Bay Area. APT, a union and bargaining group consisting of and representing Piedmont teachers and staff members, had asked for a 3.46 percent wage increase.

Eighteen teachers spoke that evening; others crowded the back wall and still more teachers stood just outside of the council chambers in the hallway peeking in, wearing red T-shirts in a symbol of unity.

“Whatever the district offers this year is not nearly enough to retain teachers,” APT President Gabe Kessler told the Board, PUSD Superintendent Randy Booker, and Assistant Superintendent Cheryl Wozniak before turning the podium over to the teachers.

Behavioral analyst Austin Lambe, who wasn’t present at the meeting because he was working at his second job, had his letter read for him.

“One thing I love about working in PUSD is it is such a privilege to get to work with this group of education professionals,” Lambe wrote. “I have been working in Bay Area school districts for over 30 years and it is unique to find so many dedicated and talented educators willing to consistently go beyond expectations for our students.”

Lambe then revealed the extent of the financial hardships he faces. He recently lost his housing of 11 years in Oakland, which he wrote was a “rude awakening to the stark reality of the current Bay Area housing market.”

“Thankfully, we found a similar house at below market rent in the same neighborhood,” his letter continued. “However, our new rent is a 142 percent increase per month. We are now paying $2,700 more per month than we were last year. My PUSD salary does not cover our new monthly rent.”

Core 7 teacher Ali Kelly who has been teaching in Piedmont for 23 years shared her story of being a single parent and raising three children. She said she typically works two jobs at once “probably at the detriment to my own family.”

“Please consider making any changes possible to provide Piedmont teachers with increasing wages that reflect costs of living, devotion and dedication of the teachers of PUSD,” urged Kelly.

Theater teacher Kim Taylor who has worked in PUSD for more than 15 years said she loves the Piedmont community as much as anyone but the only way she can survive in the Bay Area is by working a second job at a prison. “On an easy week, I might work 45 hours a week,” Taylor shared. “On a tougher week, I might work closer to 90 hours a week.”

Chemistry teacher Jon Savage, who has taught at PHS for seven years and also coaches the boys’ water polo team, said in a letter that was read to the Board that “Apartments in my building are renting more than twice what I paid when I first moved back [to the area] after taxes, rent and utilities. That consumes more than 60 percent of what my starting salary was. My current salary schedule and makes it all but impossible for new teachers to make it in Piedmont. I wouldn’t have applied here if I was in the same position I was in 2012.”

AP Calculus teacher Amy Dunn-Ruiz has been teaching since 1997 said it was humiliating to share her financial situation with the Board. “There are people with power who might not be feeling the crisis we are in,” Dunn-Ruiz said. “I don’t believe there is a teacher shortage; I believe there is a compensation shortage. We’re going to lose talented teachers.”

Ann Aldridge-Peacock who teaches social psychology at PHS and MHS told the School Board that “You are those people in power. In this situation you have the ability to move the arc just a little bit in the right direction. You can’t undo history, but you can do something. We are asking 3.56 percent.”

Nick Bruno, who teaches Homebase and is co-chair of the special education department, said “In four years, we’ve had five special education teachers leave; from 13 to five. That’s crazy,” Bruno said. “I love my job but I can’t do it; it’s too expensive. I’m probably going to move this summer.”

“This has been overwhelming,” said School Board President Amal Smith, who thanked the teachers for their eloquence in sharing heartbreaking stories. She called the funding provided from the state “criminal.”

Smith looked at the School Board trustees and announced that she “suspects the School Board is at 100 percent participation” in contributing to the Giving Campaign, which has raised more than $800,000 in two weeks from 291 households. The campaign has a $3 million goal.

She said that the School Board has pushed for small things in moving the needle, including the recently amended Interdistrict Transfer (IDT) Policy, parcel taxes on the community for the past 30 years and the added measure aimed at attracting and retaining teachers.

“As a whole, we deeply care,” said Smith. “As generous as our community has been, it’s clearly not enough.”