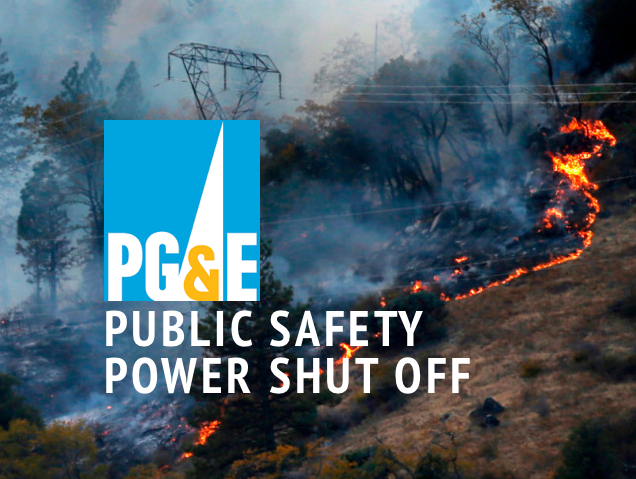 UPDATES from the Public Safety Committee meeting: PG&E’s PSPS program will bring a whole new meaning to the phrase, “Lights out!”

At their most recent meeting, Fire Chief Bret Black told the Pubic Safety Committee that over the past six months, PG&E has been proactive in its public outreach about its Public Safety Power Shutoff (PSPS) program. Piedmont’s department heads have all since been informed and provided feedback to PG&E.

“We have Tier 2 and Tier 3 zones in our city and around us, so the likelihood of us being impacted is significant under the right weather conditions,” Black said. “[PG&E hasn’t] communicated to us exactly what their metrics are going to be. I think they’re trying to figure that out as well.”

According to Black, the PSPS will impact all city services for up to 72 hours. The length is due to the need for PG&E to inspect every transmission distribution line to ensure there aren’t hazards or trees touching any equipment.

As of press time, PFD doesn’t know if the shutdown will impact a few cities or the entire region. Black stated that PFD and PPD will be notified 48 hours ahead of any impending power shutdown. PG&E will determine the scale of the PSPS and threat thresholds from its command center in San Francisco.

“This has never happened before on this scale but they’re talking about the possibility of doing transmission lines and distribution, which is a much bigger deal,” Black said. “Those together could mean millions of people impacted, rather than just certain pockets.”

He added that one of his lead concerns is the city’s water supply, much of which is powered by pumps.

“A lot of people think that they pump it into these reservoirs and its gravity-fed, but not all the time consistently,” Black explained. “EBMUD has been very proactive; it goes over their plan when a PSPS is declared, because this is being imposed on them as well.”

He said that EBMUD will top off all the reservoirs in the region that will be impacted, and notify all customers of a water conservation plan.

EBMUD stated on its website: “If and when a PSPS is announced in the East Bay, EBMUD may ask you to minimize your water use to ensure water is available for firefighting and indoor use. At these times, turn off your outdoor irrigation. And don’t forget to stock up on emergency water supplies – two gallons per person per day for up to seven days.”

Black stated that Piedmont department heads will obtain future information about the PSPS plan and training from Emeryville’s city staff.

“As of now, Emeryville’s City Administrator is the collection point for information dissemination,” he explained. “Myself, the City Administrator, or Jeremy [Bowers], would go there to get the latest updates.”

PFD is looking to update the city’s Emergency Operations Plan (EOP) since the current plan has no benchmarks set for the PSPS.