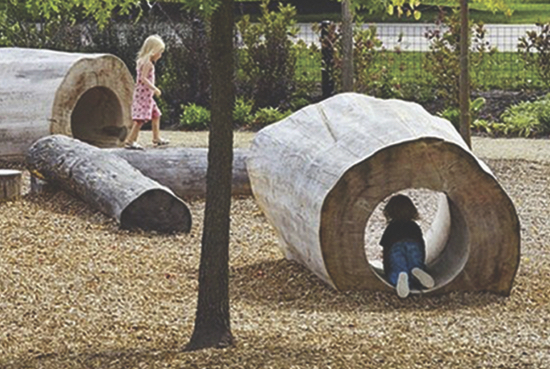 The Linda Beach Park and Playfield, adjacent to Oakland Avenue and Egbert W. Beach School, is already a popular location for surrounding neighborhoods, but portions of it have suffered from overuse and a lack of modern facilities.

Plans to renovate the park, which includes turf athletic fields, tennis courts and a playground, and has served the community for about a century, have been in discussions for several years. The process is now nearing a point of approving construction contracts and the Piedmont Beautification Foundation has made it the focus of its current fundraising efforts.
The foundation, which has raised more than $3 million for civic improvements since its founding in 1964, has sent a brochure to every household in town explaining the effort and seeking support, said PBF President Patty Siskind.

“Our focus is the future location of the Beach School playfield, tot lot and California Playscape,” Siskind said.

“The area next to the Oakland Avenue Bridge is just asphalt right now, but it has wonderful potential to be more natural, with trees and a hillside slide.”

The athletic fields have undergone “significant transformation” since, according to a city staff report, but “the spaces surrounding the field have received very little attention over the years. The report notes that “In particular, the area adjacent to the Oakland Avenue Bridge has never been developed and the bathroom building is outdated” and not in compliance with Americans with Disabilities Act (ADA) accessibility requirements.
“The tot lot on the other end is one of the most heavily used facilities in Piedmont,” Siskind said. “It’s definitely overused.”

Getting to the point of fundraising is a major step in a process that has taken years and considerable public input that led to the drafting of a master plan to unify and modernize the different elements of the park.
““I would say for the city it’s one of our really active use zones. It’s very beloved by the neighborhood,” said Nancy Kent, the city’s parks and project manager and liaison to PBF and the parks commission.

Sara Lillevand, director of the city Recreation Department, “was the lead on this project” and “did really robust outreach to residents and the neighborhood,” with plans and visions for the park evolving as a result of public input, Kent said. “The end result is that Sara really listened to what the neighborhood and residents wanted,” she said. [Read related: https://piedmontexedra.com/2019/01/council-approves-plan-to-overhaul-improve-linda-beach-park]

The lengthy list of improvements for the park compiled by landscape architect firm Groundworks Office of Berkeley from that input include:

The project is designed to be built in phases to allow work to start and advance as funding availability allows, including future plans for a multi-purpose recreation building at the park’s northwest corner.

Like many of the public-private partnerships that Piedmont relies on to make community needs a reality, the involvement of the Piedmont Beautification Foundation is essential in the effort at Beach Park.

Kent noted that “PBF funding has kickstarted many projects in the city.”
The foundation has seven trustees and about 40 active members, said Siskind, now in her eighth year with the organization.

The organization accepts donations for four funds on its website, piedmontbeautificationfoundation.org: The General Fund currently dedicated to the tot lot and nature playscape projects at Beach Park; the PBF Sports Fields Endowment Fund, which goes to maintain athletic facilities in town; the PBF Endowment Fund; and Commemorative Tributes, encompassing benches, trees, and special projects. “The Piedmont Beautification Foundation tries to fund various projects to make the city safer and more livable,” Siskind said. “When the community is interested in something we help make it happen.”