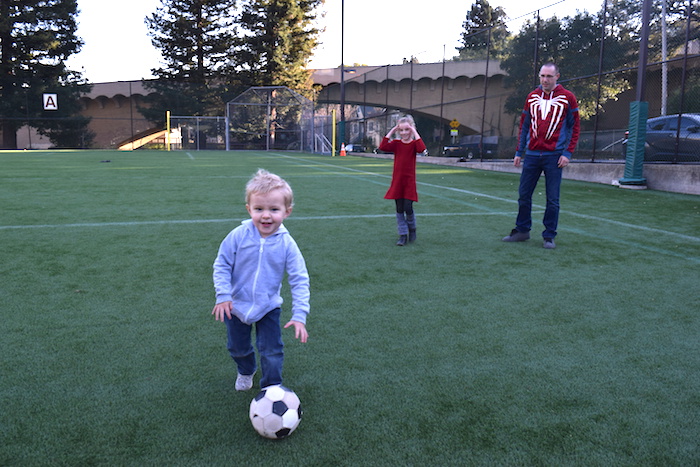 Noah Magee, 3, kicks the soccer ball around with his dad Tim Magee and sister Marina, 7, on the artificial turf field at Linda Beach park Tuesday afternoon

PIEDMONT — After 14 months, nine sometimes contentious public meetings and significant plan revisions along the way, the City Council on Tuesday approved a plan that will guide a major remake and remodel of Linda Beach Playfield and Park off Oakland Avenue.

The council voted unanimously to approve the Linda Beach Conceptual Master Plan, which calls for a complete overhaul of the Oakland Avenue end of the park, complete renovation of the tot lot and expansion of the park’s Americans with Disabilities Act accessibility, with expanded ramps and trails, and improved access of the tot lot sand area for kids using wheelchairs. (See related: City council to discuss Linda Beach Park plan)

While possible plans for a trial pickleball installation on one of the tennis courts drew criticism Tuesday from park neighbors, those who spoke about the park master plan itself had nothing but praise. Council members agreed, and were gratified with how the plan evolved.

I think this is an example of planning at its finest. As a professional planner it warms my heart.

Linda Beach Playfield and Park, along Linda Avenue between the Oakland Avenue overcrossing and Beach Elementary School, has been there in one form or another for about 100 years. The main play field has seen significant upgrades in recent years, and artificial turf was installed in 2004.

But other parts of the park grounds, specifically the restrooms, tot lot, picnic areas and other spaces along the southeast edge of the park near Oakland Avenue, have gotten little attention over the years..

Planning for a comprehensive renovation of the park (minus the already updated playing field) started in November 2017 with a community meeting. Based on feedback presented there, Berkeley-based landscape architecture firm Groundworks presented three conceptual ideas at a second community meeting in January 2018.

“Robust and passionate” feedback from this meeting, as city Recreation Director Sara Lillevand termed it Tuesday night, combined with an online survey which received more than 250 responses and two joint Piedmont Parks Commission/Recreation Commission meetings where the plan was discussed, led to the creation of (and revisions to) this conceptual plan.

Out of all that came three major design goals, as presented by Piedmont city staff:

Some specific goals now include a “California playscape” near the Oakland Avenue overcrossing (a complete reworking of what now is a paved, and largely unused, area); a newly enclosed tot lot, about 4,000 square feet, for children 3 and younger at the north end of the park within the existing tot lot footprint; new restrooms to serve the tot lot; flex space and tennis courts on the north end of the park; a sport court “flex space” adjacent to the remodeled tot lot; a bocce ball court, probably using artificial turf; new picnic areas suitable for small family gatherings; and new, modern and ADA-accessible restrooms and storage at the south end of the park.

Generating more discussion Tuesday than the master plan itself was a related but separate proposal for an eight-month trial pickleball court using part of one of the existing tennis courts. While one speaker said he welcomes this senior-friendly sport, several others complained of the noise from the balls hitting the racquets — noise amplified by the concrete Oakland Avenue Bridge in what amounts to a “canyon.” One speaker asked for the proper “pickleball sonic testing.”

“It sounds like an air nail gun being hit into a roof,” said Lisa Neville, a resident of nearby Sunnyside Avenue.

Lillevand and others stressed that the pickleball discussion is separate from the park master plan’s. “That process is still open, and it won’t happen behind closed doors,” she said.