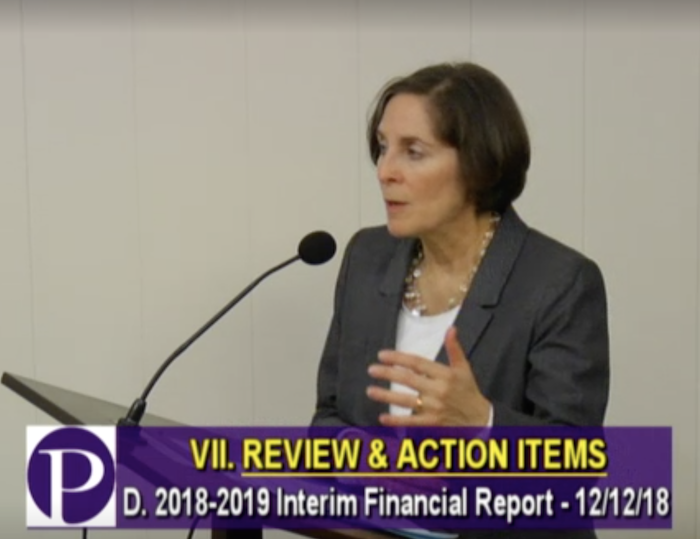 During the Dec. 12 regular Board of Education meeting, she presented a detailed budget report that concluded 2019-2020 budget could be short by $1.9 million and the following school year could have a $2.4 million deficit.

Alahydoian told the board that there is time to work on solutions.

Superintendent Randall Booker said to curb some of next year’s $1.9 million shortage, the district should do some cost saving this year. He added that every effort will be made to increase revenue and decrease expenditures without staff cuts.

“We have to tighten our belts this year to help with the next two years,” he said.

The trustees discussed past years when the district’s financial status was similar and some of the solutions that helped close those budget gaps, such as caps on benefits, work furloughs for fewer teaching days, and the state relieving class size requirements.

Attendance declines have been occurring statewide. And those declines directly affect local funding. Average Daily Attendance (ADA) determines the actual dollars each district receives from the state. In Piedmont schools, there have not been any sudden or deep dips, Booker said, but the changes do affect ADA formula revenues. The district’s projections show enrollment may drop from the current 2,601 students this year to 2,544 next year and 2,506 the following year.

The decline is speculated to be partly caused by Bay Area residents moving away because of the high cost of living. Other reasons include swings in per class populations and students changing schools.

Booker noted that Piedmont’s schools receive lower state funds than many districts because of having fewer low-income families and those where English is not their first language. Piedmont’s schools have few, if any, students that qualify for such programs.

Also, he said, bringing in more students isn’t always a solution because it can lead to more hiring and resource expenditures.

The trustees agreed the best path forward is to work with district staff, parents and the community-at-large to develop viable ideas to ward off future budget gaps.

This year’s budget has a $45,000 shortfall at this point. Alahydoian said the district will be able to cover that. She added that expenditures went down slightly in October. (To view the entire power point, please click HERE.)

Before the meeting, Piedmont Education Foundation’s executive director Heather Frank announced that this year has brought “unprecedented success” in the Giving Campaign. While the community’s support is vital to the schools, Frank said she hopes the state will see the need of school districts throughout California and provide the necessary funding.

Meanwhile, she said, “The Foundation and the district will do our best to increase funding revenue.”