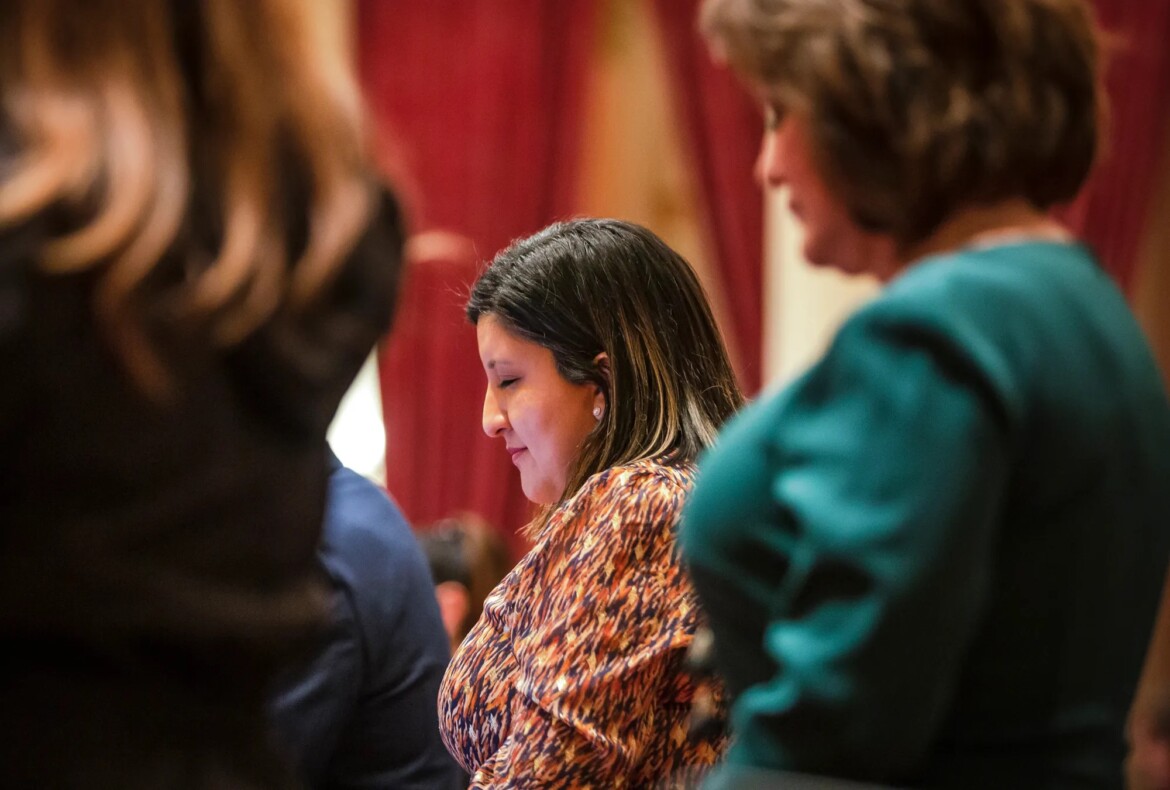 State Sen. Melissa Hurtado, a Bakersfield Democrat, bows her head in prayer before session at the state Capitol in Sacramento on Jan. 4, 2023. Photo by Rahul Lal for CalMatters

One shared takeaway from the otherwise very different starts to new legislative sessions in Sacramento and Washington, D.C.: What a difference 20 votes make.

The Legislature that reconvened Wednesday in the California Capitol is the most diverse in state history, with a record 50 women — although there’s still a slim possibility that number could fall to 49 following recounts for a hotly contested state Senate seat representing Bakersfield.

In Washington, U.S. Rep. Kevin McCarthy is also being stymied by 20 votes.

That’s the number of congressional Republicans, 19 of whom are associated with the far-right Freedom Caucus, who have thus far refused to support the Bakersfield Republican’s bid for Speaker of the House — a post recently vacated by San Francisco Democrat Nancy Pelosi. The result: The House adjourned Wednesday after its sixth failed attempt to elect a speaker — rendering it essentially nonfunctional, preventing newly elected members from being sworn into office, and creating what President Joe Biden deemed a “really embarrassing” situation.

The House is set to take up the matter again today, and McCarthy has repeatedly expressed confidence that he’ll end up with the necessary votes. But his failure to win the speakership on the first vote — a situation that hasn’t occurred since 1923 — could be yet another sign of the challenges facing the California Republican Party.

Seemingly central to the conundrum of the state GOP is former President Donald Trump: Should politicians denounce him, support him or stay neutral?

Some have tried to sidestep the issue by avoiding mention of Trump entirely. Others, including Lanhee Chen, the Republican controller candidate in California’s November election, have apparently tried to appeal to a broader swath of voters by publicly disclosing they didn’t vote for Trump. But neither strategy has proven to be particularly effective: Chen lost to Democrat Malia Cohen, 55% to 45%. No Republican in California has won statewide office since 2006.

The result could be that California, long used to having one of its representatives hold the top position in the House, may end up with less influence and sway on the national stage — and possibly fewer benefits for its own residents.

Even assuming McCarthy were to replace Pelosi as speaker, California is “mindful that we’re going to have to be more proactive as a state in terms of our efforts in Washington, D.C.,” Gov. Gavin Newsom said in November.