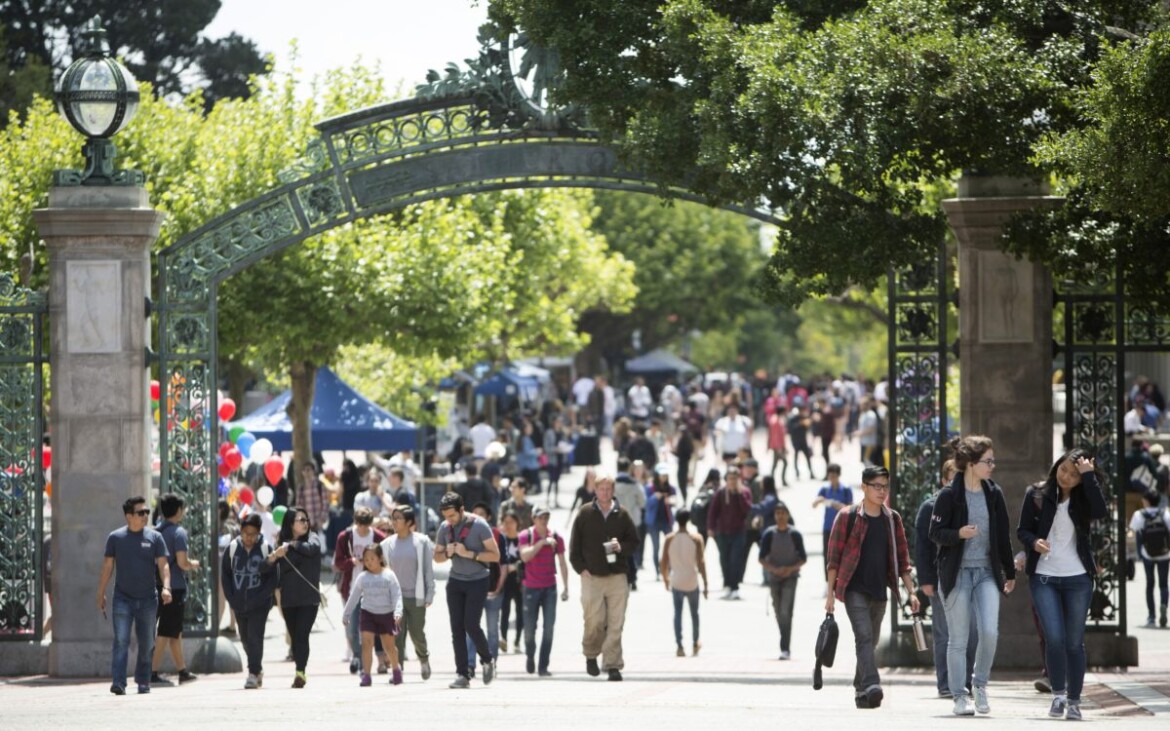 University of California at Berkeley students on campus in front of Sather Gate in Berkeley, Calif., Wednesday, April 19, 2017. Photos by Alison Yin for EdSource

Facing pressure from Gov. Gavin Newsom and state lawmakers to add thousands of California resident undergraduates over the next several years, the University of California is off to a slow start in making that happen.

In fact, UC estimates that enrollment of in-state students will be down slightly in the current 2022-23 academic year compared with last year. By UC’s own admission, that makes it unlikely that it will meet the expectation set last year by Newsom and lawmakers to add more than 7,600 of those students between 2022 and 2024.

Officials pointed to a variety of reasons for UC not enrolling its targeted number of in-state students, including drops in community college enrollment resulting in fewer transfer students; a student housing shortage that limits capacity at many campuses; and different enrollment strategies across the campuses, some of which deliberately limited their enrollment this past fall.

Kevin McCarty, chair of the Assembly’s subcommittee on education finance, said he finds it puzzling that UC is falling short of those targets, particularly given that there are far more qualified UC applicants than ultimately get admitted.

“UC has a massive demand and supply imbalance. In other words, we turn away qualified Californians in record numbers. And so how is it that we’re not able to increase enrollment? That’s kind of perplexing,” McCarty said.

UC leaders plan to discuss the enrollment dilemma at next week’s board of regents meeting, when regents will receive a report that describes UC’s progress toward goals set by Newsom as part of a multiyear agreement with the system. The five-year compact, which Newsom unveiled a year ago, promises annual budget increases of 5% for UC and the 23-campus California State University in exchange for the two systems working toward a number of goals, chief among them expanding enrollment of in-state students.

UC says that even though the system isn’t yet making progress this year toward the goal, it will make up for it in future years. By the time the agreement with Newsom expires in 2027, UC maintains that it will have added about 14,000 more California undergraduates.

Newsom this week signaled that he trusts UC will follow through. In his budget proposal Monday, he announced plans to fully fund the second year of the compact, which asks for UC and CSU to increase enrollment of California resident students by 1% annually. He did that despite projecting that the state faces a $22 billion deficit.

“We remain confident there. I think what we have told and communicated to both segments is an expectation that while they saw some flattening in their enrollments this year, we have an expectation that they recover those enrollments and still make progress toward the 1% that is reflected in the compact,” Chris Ferguson, an analyst in Newsom’s Department of Finance, said in an interview this week.

When the state Legislature’s education committees convene for hearings this winter, UC can expect to be questioned over its slow enrollment growth. Lawmakers have pushed for UC to admit and enroll more in-state students who are eligible for admission but compete with out-of-state and international students for coveted seats across the system. In addition to increasing enrollment of California residents, lawmakers have also mandated that UCLA, UC San Diego and UC Berkeley enroll fewer of those out-of-state students.

Last year’s budget deal included more than $80 million for UC to add 5,632 additional California resident undergraduates by 2023-24. On top of that, UC is expected to add another 2,000 in-state students by 2023-24 under the compact with Newsom.

In the report to Newsom and top lawmakers outlining its progress toward the compact goals, UC described how it plans to make up for this year’s lack of enrollment growth. The system of nine undergraduate campuses now expects to grow in-state enrollment by an average of about 3,500 students over each of the next four years, for a total of 13,900 new California resident undergraduates by the 2026-27 academic year.

One of UC’s challenges is that although the system as a whole is expected to add more in-state students, enrollment planning ultimately comes down to individual campuses that each face their own unique circumstances.

UC Davis, for instance, intentionally enrolled fewer first-year students this past fall than in fall 2021. That was because enrollment management officials felt that the campus was overenrolled in fall 2021, when it enlisted about 10,500 freshmen and transfer students, or about 1,200 more than it did the previous fall. In fall 2022, the campus enrolled about 9,200 new students. That included 7,545 new California residents, about 900 fewer than fall 2021.

“We took a little bit more conservative approach, knowing that we were a thousand students over the year before,” said Robert Penman, executive director of undergraduate admissions at Davis.

Penman added that there wasn’t any pressure from UC’s central president’s office to maintain or increase its level of California resident enrollment this year. In the long term, he “would expect to see some growth.”

Also hampering UC’s growth this academic year was a decline in summer enrollment at the campuses. UC has singled out the summer term as an area for growth over the next several years, but enrollment during summer 2022 was down by about 1,500 students systemwide compared with the previous year.

With pandemic restrictions loosened last summer compared with the previous year, some students may have been “excited to live life again, and not just be taking classes all summer,” said Michelle Whittingham, associate vice chancellor of enrollment management at UC Santa Cruz.

In future summer terms, however, Whittingham is hopeful that Santa Cruz will be able to steadily grow enrollment. That may be more realistic than adding students in the fall, spring and winter quarters because housing on campus and off campus is limited. Santa Cruz is dealing with a dire housing crisis and has even faced lawsuits blocking it from adding more dorms.

Santa Cruz isn’t alone in that. Several of the system’s campuses face housing shortages, including UC Irvine, where enrollment of California resident undergraduates was down by about 200 students this past fall.

“We had a lot of applicants say, ‘I just can’t come. I can’t find a place to live that I can afford,’” said Dale Leaman, executive director of undergraduate admissions at UC Irvine.

Also not helping is the dramatic decline in enrollment at California’s community colleges, which have lost about 18% of their students since the onset of the pandemic. Those drops have started to have a spillover effect into UC, which received fewer applications from transfer students last year and as a result admitted fewer of those students.

Leaman said UC campuses could benefit from finding new ways to identify qualified students and admitting them. That might mean doing a better job with outreach to students in different parts of the state. In Irvine’s case, Leaman said he wants to entice students in the far northern part of state, like Shasta County, to apply to Irvine.

“We have to connect to rural and distant communities and get those students committed to UC. I think that’s a recruiting challenge that we have to meet,” he said.

But Leaman added that increasing enrollment of California residents isn’t going to happen suddenly and that this year’s lack of growth isn’t necessarily an indicator of what’s to come.

“Taking a super narrow, year-over-year comparison, I think is not going to be all that informative,” Leaman said. “The compact is more long-term, and as we scale through time, I think we’re going to achieve that. I think it’s something that we have to do.”