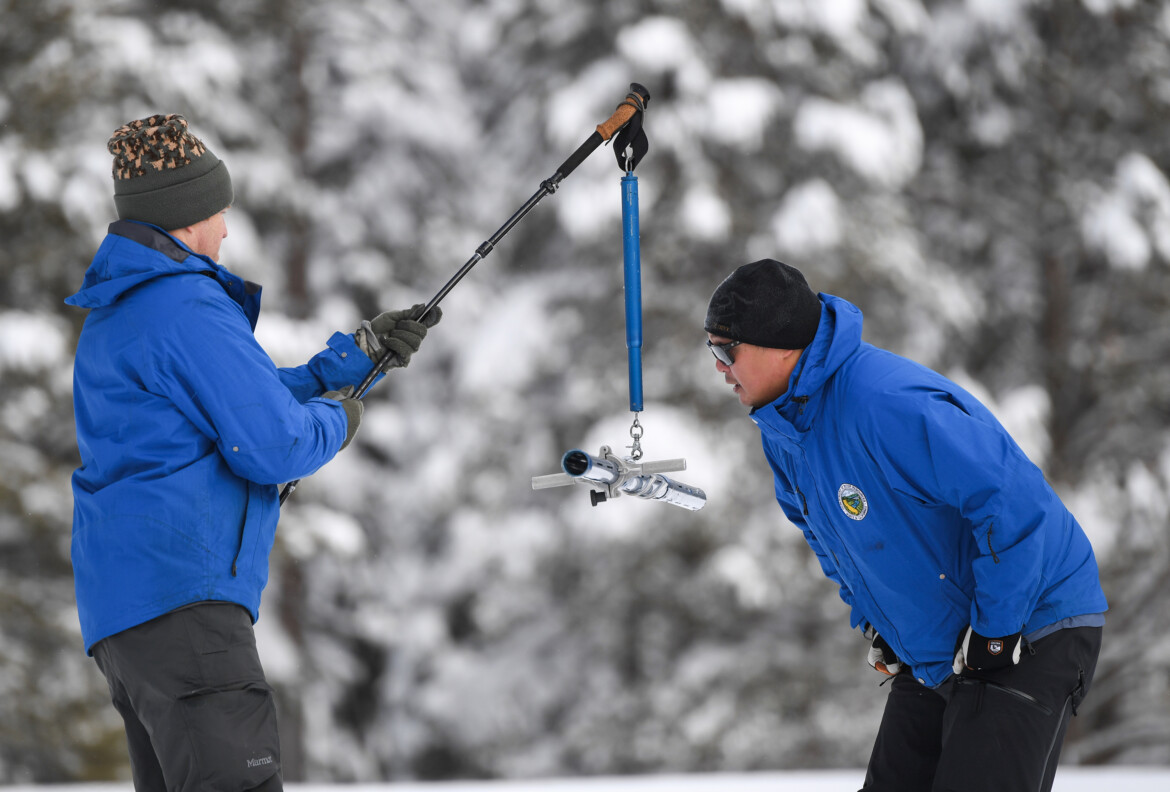 December storms have provided the Sierra Nevada snowpack with some of the highest preliminary snow levels in 40 years, according to the California Department of Water Resources’ first snow survey of the season in South Lake Tahoe.

Results from the state’s manual snow survey revealed that the area near Phillips Station, one of the 260 spots the department samples multiple times a year, has a snow depth of 55.5 inches and a water content of 17.5 inches. Sean de Guzman, manager of DWR’s Snow Surveys and Water Supply Forecasting Unit, said these numbers are 177 percent of average for this time of year.

DWR’s electronic readings from its automated snow sensor network across 130 locations put the statewide snowpack average at 17.1 inches, or 174 percent of average of this date. November rains that soaked the region’s soils early in the season are partially responsible for the numbers, along with early December snow that gave some areas up to 4 feet of snow. State water experts are hopeful the snowpack — also referred to as California’s “frozen reservoir” — will keep growing with the hefty rainfall expected to pour over the state in the upcoming days.

While the latest numbers are a promising start, state water experts say they don’t promise an end to the state’s water crisis just yet.

“No single storm event will end the drought. We’ll need consecutive storms, month after month after month of above average rain, snow and runoff to really refill our reservoirs so that we can really start digging ourselves out of extreme drought,” de Guzman said.

This year’s data closely mirrors the beginning of the 2022 snow season, which started with depths 150 percent above normal levels until the state was hit with the driest January, February and March on record. DWR said snow levels last April were the third-lowest in state record, which led to drought conditions once California settled into its dry season.

“It’s always great to be above average this early in the season, but we must be resilient and remember what happened last year,” de Guzman said. “If January through March of 2023 turn out to be similar to last year, we would still end the water year in severe drought with only half of an average year’s snowpack.”

Even with above-average snow and rain levels recently, the state’s reservoirs are still depleted. California’s largest reservoir, Lake Shasta, is only at 34 percent capacity, DWR officials said. Department drought manager Jeanine Jones said the region would have to overcome years of deficit conditions in its reservoirs and groundwater basins. California will continue to lose runoff until soil gets very wet for a prolonged period, she said.

“We know that it will take quite a bit of time and water to recover this amount of storage, which is why we don’t say that the drought is over once it starts raining,” Jones said in reference to the significant decline in groundwater levels.

The upcoming stormy weather is slightly colder than the set of storms over the December holidays, but now water officials are tasked with a new challenge: ensuring that Californians are safe from the significant flooding from state rivers and creeks that will come in the next few days, said Karla Nemeth, director of DWR.

“The significant Sierra snowpack is good news but unfortunately these same storms are bringing flooding to parts of California,” Nemeth said. “This is a prime example of the threat of extreme flooding during a prolonged drought as California experiences more swings between wet and dry periods brought on by our changing climate.”

DWR officials said Californians in flood-prone areas should stay connected to local and county emergency response teams in the event of a flood, and to continue to conserve water no matter the weather conditions.

DWR’s next snow survey is tentatively scheduled for Feb. 1.