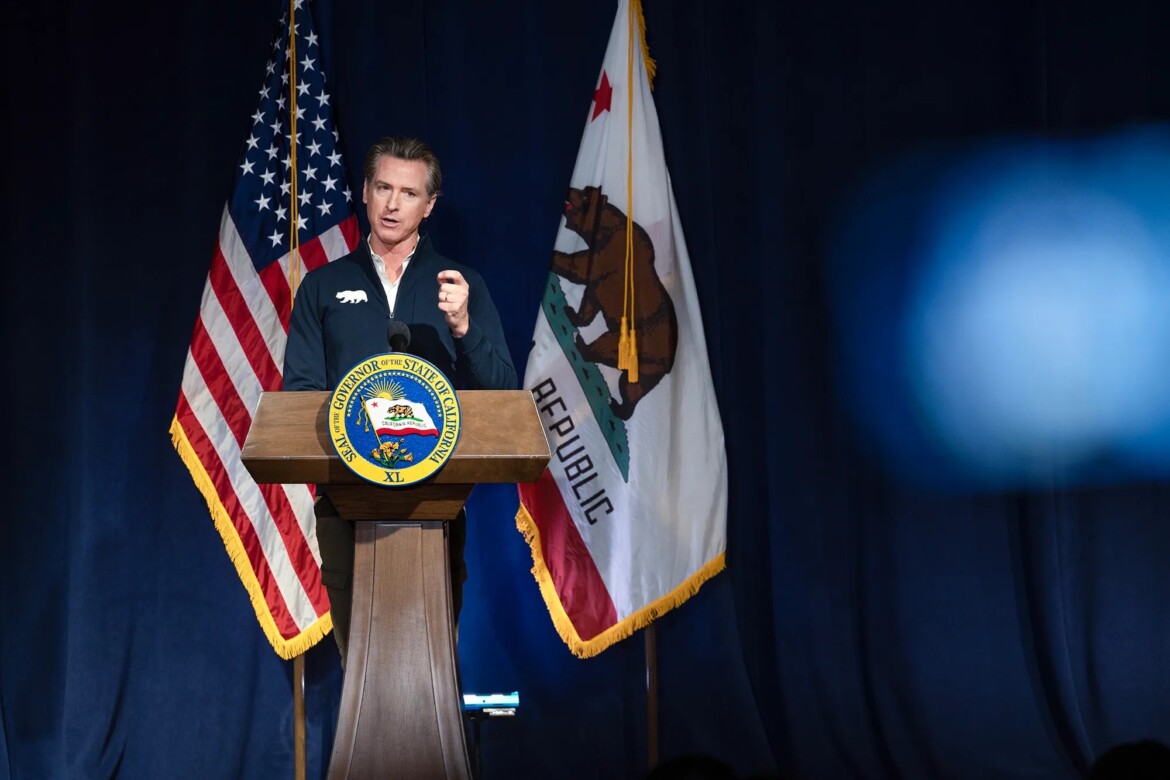 Gov. Gavin Newsom unveils his budget proposal for the 2023-24 fiscal year during a press briefing at the California Natural Resources Agency in Sacramento on Jan. 10, 2023. Photo by Miguel Gutierrez Jr., CalMatters

California will delay some spending commitments, reverse recent budget resiliency measures and shift funding sources to limit the amount of cuts it has to make to close a projected $22.5 billion deficit, Gov. Gavin Newsom said today.

The shortfall, slightly less than the $24 billion that financial analysts for the Legislature estimated in November, will not prevent the state from fulfilling its promises to education, transportation and climate programs, the governor insisted.

“We’re keeping our promises,” Newsom said during a press conference in Sacramento, where he unveiled a $297 billion spending plan, about 3.6% smaller than last year’s record budget.

“In spite of this modest shortfall, we’re continuing to make transformative investments.”

It’s a swift reversal of fortune.

Six months ago, Newsom and legislative leaders were crowing about a surplus of nearly $100 billion — equivalent to the entire annual expenditures of the Czech Republic — half of it available for discretionary purposes.

Negotiations dragged on for weeks as they deliberated over how to spend the massive windfall, ultimately agreeing to expand the social safety net to more undocumented immigrants, create a new court system to compel some homeless and severely mentally ill people into treatment, and provide refunds to most taxpayers in the state.

But many of the appropriations were one-time allotments or funding increases that would only take effect in future years if revenue estimates held up — commitments that are now at the greatest risk as the state puzzles over how to balance its books.

Newsom said today that the state would not tap into its cash reserves to address the deficit, in order to maintain those funds in case of a greater economic downturn in the future, though his administration is not expecting a recession.

Instead, the governor has proposed to delay $7.4 billion in spending to future budget years, shift $4.3 billion in appropriations to other sources and enact $5.7 billion in reductions for previously funded programs. Another $3.9 billion in “trigger” cuts could be reversed next year if the state has enough money.

The budget process will now pause for the next several months as the state waits to get a clearer picture of its financial health. In May, after income taxes are filed, Newsom will offer a revised spending plan based on the updated revenue figures, at which point negotiations with the Legislature will begin. Lawmakers must pass a balanced budget by June 15 in order to get paid.

Senate Republicans, who as a super-minority play almost no role in crafting California’s budget, preceded Newsom’s announcement Monday with a letter urging the governor to re-evaluate past spending increases to find a “prudent path forward.”

“It is likely that we can balance the budget by cutting ineffective spending, or by halting previously approved funds that have not yet been actually spent, and thus balance the budget without negatively affecting the people of California,” Senate Republican Leader Brian Jones of Santee and the seven members of his caucus wrote.

They did not point to any specific programs that should be reduced, though they did make several requests for new funding for a renter’s tax credit, water storage and forest management.