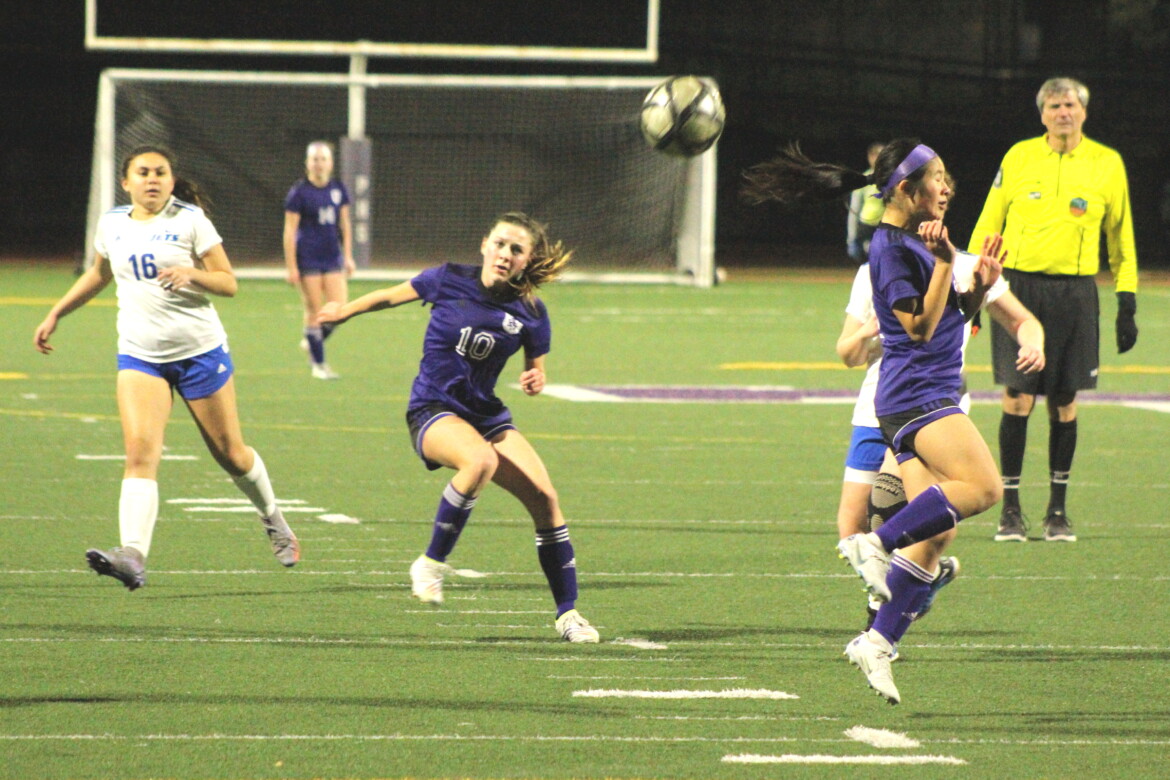 Arden Sorenson-Wald (10) sends a ball toward the net, with Encinal's Gabby Benaquista (16) at left and Piedmont's Miranda Liu (6) at right.

Alison Jensen scored on a long shot for Encinal High School as the Jets defeated Piedmont at Witter Field on January 17, 1-0.

The shot from 30 yards came in awkwardly and found its way through the hands of Highlanders goalkeeper Morgan Hunt in the 53rd minute.

Piedmont generated more chances in the game but couldn’t convert any. The loss was the third in a row for the Highlanders, who dropped to 5-4 on the year. They lost their previous two matches, 3-2 to Castro Valley and 1-0 to Berkeley.

“I felt like we were going to score,” Piedmont coach Dan Chubbock said. “Disappointed we didn’t. I thought we were more creative tonight than we were against Berkeley. So that’s one positive. We created a few more chances. We had a lot of the ball. We looked comfortable when in possession but once that goal [scored], we weren’t composed enough.”

In the postgame huddle, Chubbock told his team, “These things happen,” and, “Don’t get down on yourselves.” He said he told Hunt that, “We didn’t score anyway, so even if that doesn’t happen, we still don’t win the game and that’s a game we need to be winning if we’re going to be pushing for league.”

Ila Cantrell made three saves for the Jets. The Highlanders sent several more shots through that went wide or over the goal. When Jensen’s ball came in for the Jets, it had some funk on it.

Piedmont’s last win came on January 6 by a score of 6-1 at San Leandro. The Pirates took an early 1-0 lead before the Highlanders took over the game. Cameron Lorin scored on a penalty kick after Audrey Lam was taken down. That was the start of a big night for Lorin, who ended up with a hat trick. The score was 1-1 at halftime.

Emily Fitzgerald scored twice in the second half and Lam capped the scoring with a goal.

On January 11, Piedmont fell to Castro Valley, 3-2. The Trojans got off to a 2-0 lead before the Highlanders fought back to tie the score. Castro Valley then scored the game-winner at 70 minutes.

Taylor Hodges had two goals for the Trojans and sophomore Zoie Li scored the other. Lorin scored one goal for Piedmont and got the assist off a corner kick to Lam for the other.

On January 13, the Highlanders fell at Berkeley, 1-0. Myah Polzin had the game’s only goal.

“Really tough game,” Chubbock said. “We conceded a free kick at 15 minutes. Straight over the wall into the goal. The goal itself was just frustrating. We tried to press for the equalizer but we didn’t have the creativity to break them down.”

The good news is Piedmont didn’t lose any games to the weather so won’t have to play a four-match week late in the season.