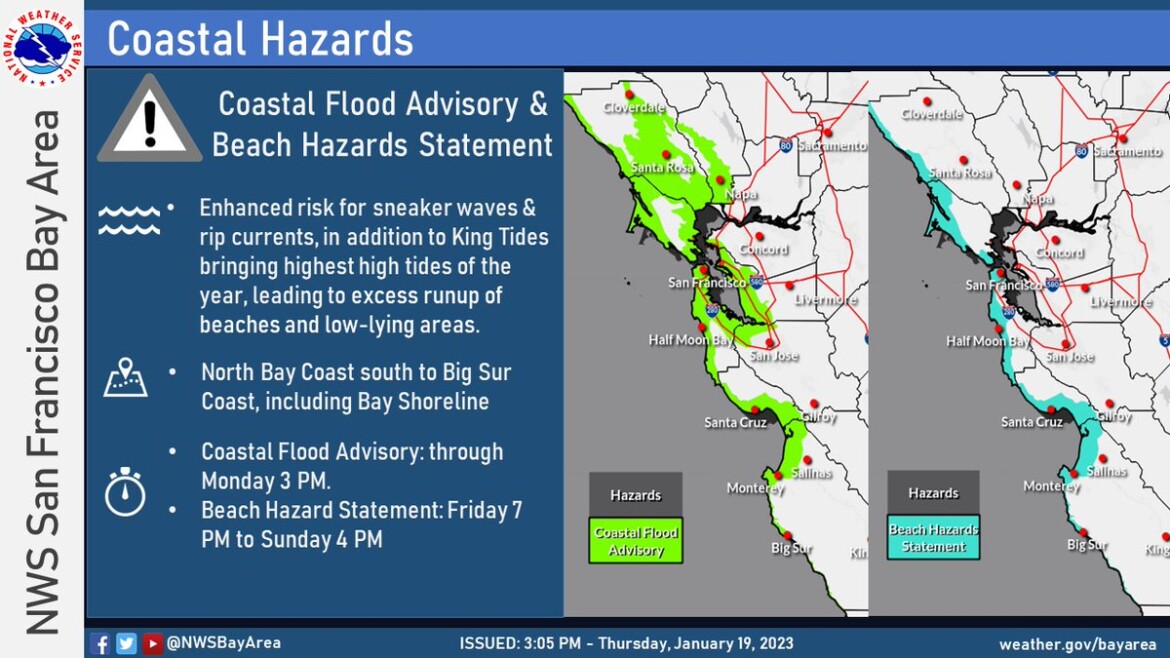 Marin County is bracing for more possible flooding this weekend as tides along the coast are expected to be exceptionally high, county Supervisor Stephanie Moulton-Peters said.

The biannual tides, known colloquially as king tides, have been known to cause flooding along shoreline communities and low-lying roads in Marin, closing roads, clogging traffic, and in some instances, flooding houses or businesses.

The National Oceanic and Atmospheric Administration (NOAA) reports that tides on Saturday and Sunday have the capability of creating flooding. These tides are seasonal and not related to recent storms, the county said.

Tides are associated with the moon, and the weekend’s tides coincide with the new moon and could reach over 7 feet, according to NOAA data. The highest predicted tides will be at Point San Quentin, which will reach 7.08 feet by 11 a.m. Saturday.

Moulton-Peters advised residents to allow extra time for trips and to avoid driving through any standing water. Areas prone to flooding during tides include the China Camp area in San Rafael and the Manzanita Park and Ride area in Mill Valley.

The Marin County Department of Public Works will be providing updates on Twitter about the conditions at @DPWMarin, while the Sheriff’s Office will also be providing any information about the tides that may impact residents at @MarinSheriff.

Snap a photo for the California King Tides project

The California King Tides Project helps visualize future sea level by observing the highest tides of today. You can help by taking and sharing photos of the shoreline during King Tides to create a record of changes to our coast and estuaries.

Explore a map of photos from recent King Tides.

Find out what time and how high the King Tides will be near you. Learn how to participate by uploading your photos via a web browser or with a free app. Your photos will be added to a map of this season’s King Tides photos. As always, please be cautious and respect the power of the ocean, and don’t disturb shorebirds that may be much farther upland than usual.

The California King Tides Project was launched in the winter of 2010/2011 by a partnership of state and federal agencies and non-profit organizations. The California project is now part of a global network of King Tides initiatives along both coasts of the US, Canada, Australia, New Zealand, Europe, and Asia. In California, partners include the California Coastal Commission and a wide range of local organizations and cities that are working to preserve the coast.

A San Francisco State University student went missing after a large wave hit him and dragged him away from the shore at Esplanade Beach, the Pacifica Police Department said Thursday.  It was reported that three adult male subjects had gone into the ocean along Esplanade Beach. While in the water one of the subjects was struck by a large wave and pulled farther away from the shore. The two other subjects were able to exit the water and called 911 for assistance.

Officers and fire fighters searched the area and surrounding beaches for the swimmer without success. Assistance was requested from the U.S. Coast Guard, California State Parks Ocean Life Guards, the California Highway Patrol air unit, and the San Bruno Police Department for use of their drone to aid in the search. The U.S. Coast Guard
responded with aircraft and a surface vessel to assist in the search.